Mac expert urges farmers to ‘stick to the knitting’ 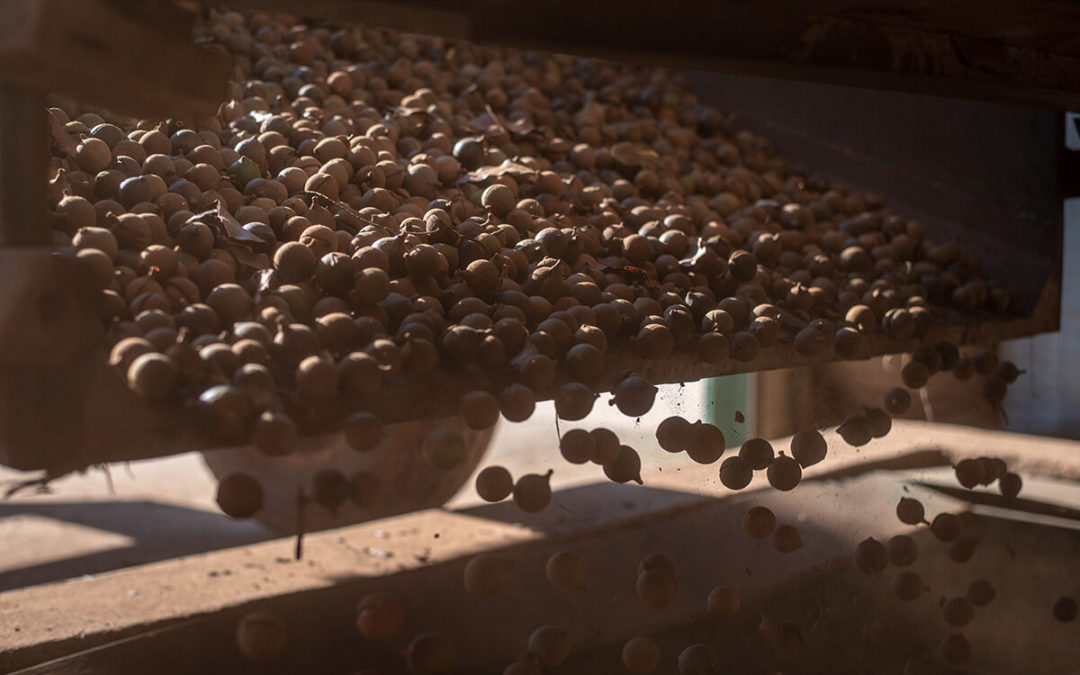 Macadamia industry expert and commentator Philip Lee says if the historic growth and development trajectory of South Africa’s macadamia industry is anything to go by, despite the global COVID-19 pandemic, the crop should remain profitable and in high demand.

There is an old English saying: “May you live in interesting times”, which actually means, “May you experience much disorder and trouble in your life”.

As we continue to endure the lockdown and witness the world as we know it change and regress by the minute and hour rather than the day or week, we can only speculate what the world order and economy will look like when this terrible crisis is over.

Even in “normal” times, it is difficult to predict where a given industry or economy will be in five or 10 years. And at this point we do not even know how long this particular crisis will last.

The Spanish flu lasted three years, from January 1918 to December 1920, infecting 500 million people (around one third of the global population) and killing 50 million. We have to believe modern medical science will produce a remedy to get us out of this hole sooner than three years.

But, enough of the dark side!

The aim of this article is to focus on the high road ahead for South Africa’s macadamia industry using its proven growth and development record – which I have been privileged to witness over the past 30 years – and to try to predict the most likely future trajectory for macadamia nut production and consumption.

South Africa’s macadamia industry was really fortunate to be included as a primary food production sector and allowed to continue with the harvesting, processing and exporting of nuts regardless of the COVID-19 lockdown. This has resulted in the sector continuing its business with hardly missing a beat.

Until mid-April – or at the time of writing this piece – the macadamia nut price was unchanged and the two processors I spoke to were busy getting nut-in-shell containers ready for shipment to China, as well as cracking and packing kernel for shipment all over the world to fulfil orders already pre-negotiated for the 2020 crop.

Figure 1 shows macadamia tree planting per province since the start of the industry in the early 1970s. Total trees planted in South Africa at the end of 2019 were 14.6 million, with 7.3 million in Mpumalanga, 3.9 million in KZN, 3 million in Limpopo and an estimated 300 000 in other regions, mainly the Eastern and Western Cape from Port St Johns to Riversdale and even as far west as Robertson. As clearly demonstrated in Figure 1, the past six years has seen the fastest rate of planting ever, with 7.6 million trees ( just more than half of total planted trees) planted since 2014, most of these (5.4 million) planted in the past three years.

It is interesting to note the only other year that saw a decline in SA macadamia production was 2004, which followed the severe drought in the 2003/04 season.

The resilience of the macadamia tree is dramatically illustrated by the speed actual production has caught up again with projected production in 2018, despite the fact that most growing regions had yet to effectively escape the drought conditions since 2015. Even in 2019 the crop was negatively impacted by hot and dry conditions at flowering and fruit set, yet there was still a small increase in total production when compared with the 2018 crop. Production in 2019 was boosted by 1.6 million young trees (aged between six and 10 years) coming into production, representing some 25% of the estimated 6.5 million trees in production that year. 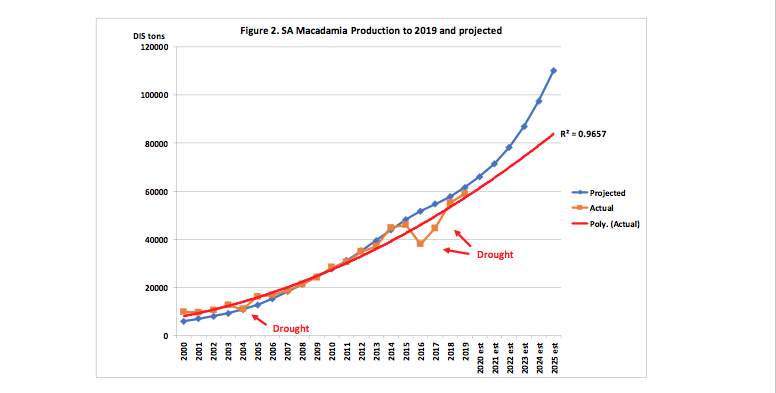 In Figure 3 we find the driving force behind the accelerated tree plantings in the past few years, especially in KZN, where the profitability of the sugar industry remains in decline. Figure 3 clearly highlights the dramatic rise in the US$ price of macadamia kernel from the low of $6.55/kg in 2007 to the estimated $18.80/kg in 2019. This is the average price for premium grade kernel of all styles supplied by South African macadamia exporters in the standard 25lb (11.34kg) gas-flushed vacuumed pouch in cardboard cartons, a price increase of 187% over the 12-year period. It is important to note the world price of macadamias has never been as high as it is now and has never before remained above US$10 for such a long period (from 2010 to 2019).

Credit must go to the processors for restricting their processing costs to the relatively modest increase of only 100% between 2007 and 2019, from R20/kg to R40/kg kernel, in the face of substantial increases in electricity, labour and transport costs over the period. 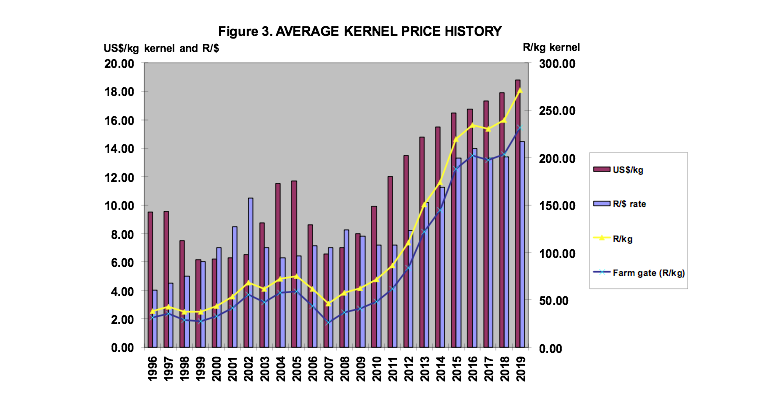 Note from Figure 3 the two dollar price crashes, from $9.55/kg in 1997 to $6.17/kg in 1999, only increasing back up to $11.70/kg in 2005 before regressing back to $6.55/kg in 2007, neither of which was caused by an increase in South African, or global, production. The crash in 1998 resulted from the Southeast Asia currency crash which started in Malaysia and spread through China and Japan to cause a serious global financial crisis, and the crash in 2007 triggered by the sub-prime debacle in the USA, also causing a major global financial crisis.

These are difficult times indeed, for South Africa and the world.

All we can do is stick to the knitting. We are fortunate to be in the food production industry, producing a nutritious nut with a high energy content, unique in taste and texture, a relatively long shelf life and proven health benefits that continue to drive increased consumption. Whatever happens in the next weeks and months, people need to eat. Our macadamia industry has enjoyed incredible prosperity and success over the past decade and our farmers have reaped the benefits of more than 30 years of SAMAC-funded research.

This means sustainable production ‘recipes’ for profitable yields are available for all growers to use. Those who implement these will achieve exceptional yields as illustrated in Figure 4 from time to time, but most will be more than satisfied by achieving the more reasonable target yield of 3 tons DIS per hectare (one ton of edible kernel per hectare), which will keep every macadamia farm profitable, even if the present price declines by 60%.

The average yield for the South African macadamia industry in 2019 was pegged at 59 050 tons DIS from some 20 000 hectares in production. This translates into 2.95 tons DIS per hectare – arguably the best average yield of all producing countries.