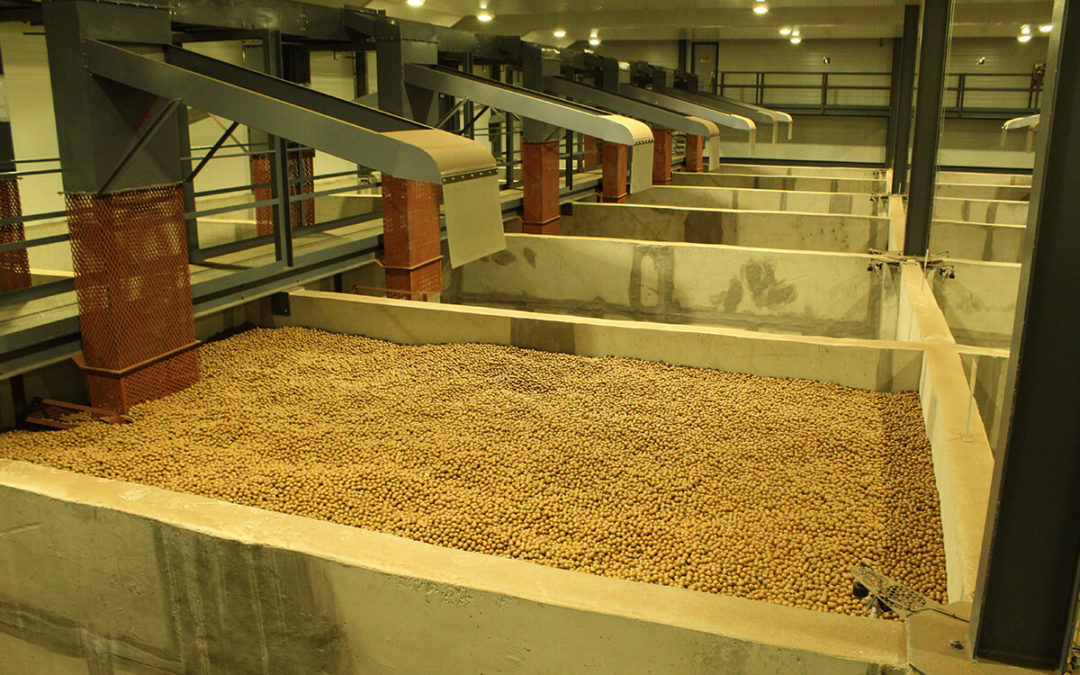 A natural product aimed at the health market would be ill-placed if the production methods were unhealthy for the planet. Mpumalanga-based nut processor Global Macadamias is walking the talk by designing a factory that is not only light on the environment but guarantees the environmental best practice-integrity of the product.

Global Macadamias made headway in 2020 when it opened the doors to what is now South Africa’s largest macadamia processing factory. Handling such large volumes not only gave the group the benefit of economies of scale but demanded attention to the quality of every processed nut to maintain market share.

“Ultimate efficiency is a trait that all business owners strive for. This was no different for the Global Macadamias facility where climate, systems and new technology were all taken into account to ensure the best use of resources. This has resulted in a drastic reduction in heating costs, and best of all, a lowering of the carbon footprint,” said Global Macadamias Director Roelof van Rooyen. 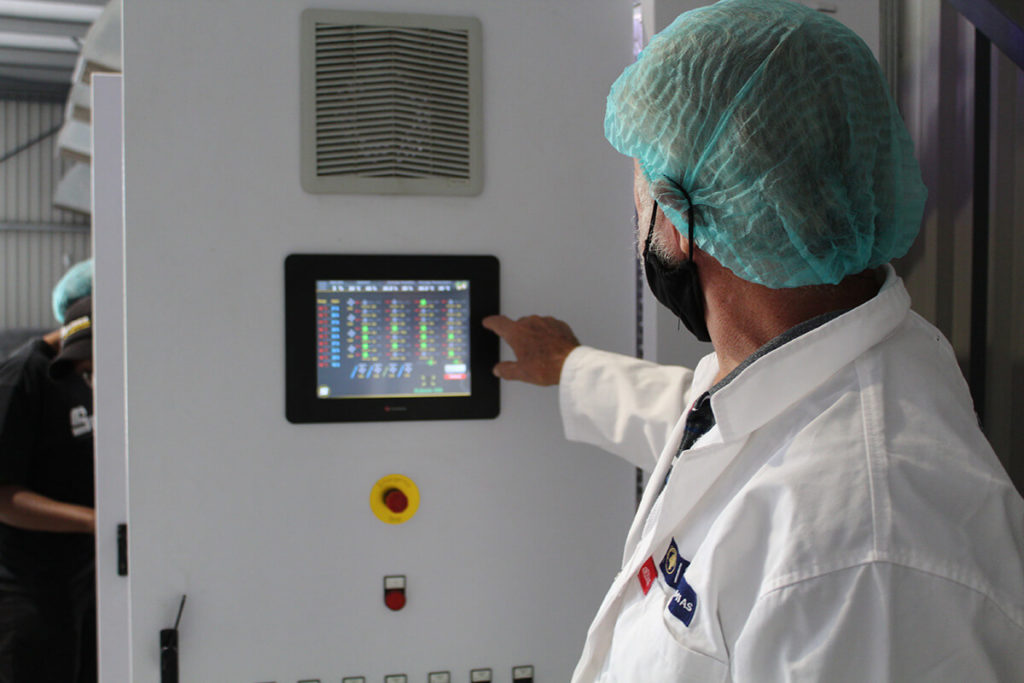 A multiplex system guarantees full control over the entire factory.

Bringing in one of the industry’s leading engineers in nut facility design, Dorran Bungay, an environmentally friendly factory was fashioned aimed at optimising the flow of nuts through the plant and mechanising processes to create an efficient system able to enhance quality.

Taking a walk through the facility with The Macadamia, Van Rooyen said several critical priorities were taken into account at the design phase.

“First, we had to make sure the system would not hurt the nuts while still putting as many through the factory as is economically necessary. Energy consumption had to be optimised to make sure the plant was energy-efficient and kind to the environment at the same time.

“Then we had to make sure the management system gave operators total control and oversight over the whole factory. And last, all capital expenditure had to be justified. This is what we have achieved here at Global Macadamias. This is a one-of-a kind factory and nothing else in the world matches this system,” he said. 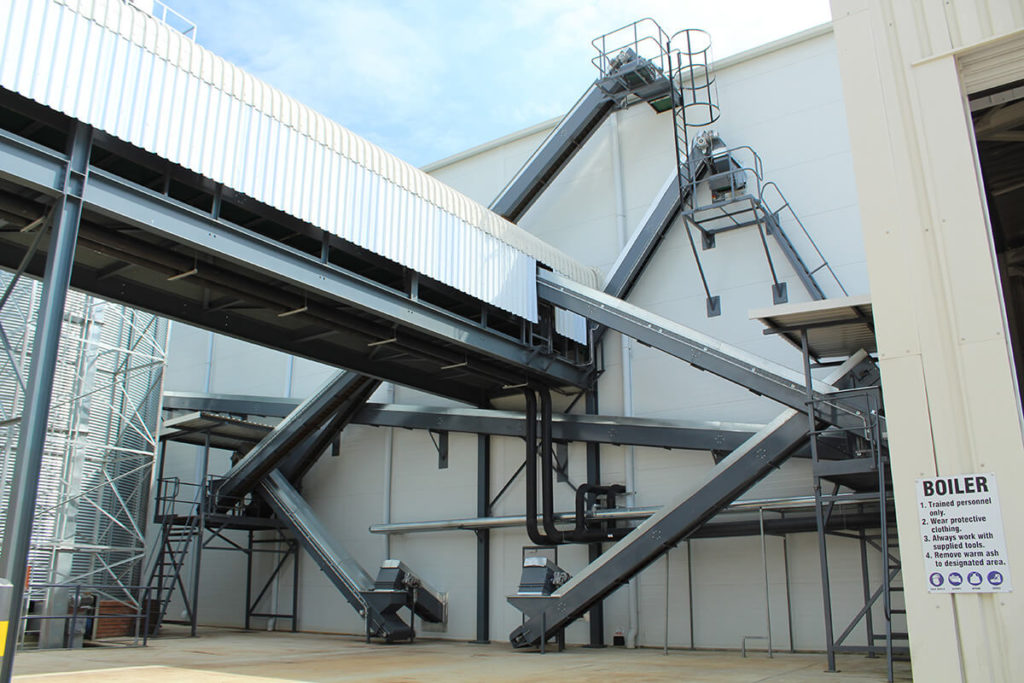 The factory makes use of mechanisation to improve efficiency. The vast network of conveyor belts can also quickly transport nuts from one process to the next.

Global Macadamias has the phase one capacity to cure and store up to 5 000 tons of nut-in-shell pre-processing, with no limitations placed on farmers regarding batch delivery size. The phase two expansion will add an additional 7 500 tons of drying and storing pre-processing.

While the plant can currently process 15 000 tons of nut-in-shell to kernel, the processing capacity is already geared to increase this to 30 000 tons in the future.

Nuts require a substantial amount of heat for the drying and curing process. While most factories rely on either Eskom power or boilers fuelled by macadamia nut shells, this facility re-circulates heat generated by a heat pump (refrigeration) system.

Factory designer Dorran Bungay said by using the high co-efficient of performance (COP) generated by the heat pumps, they were able to re-direct the waste heat coming off the condensers, which would usually be released into the atmosphere, and instead, pump it into water tanks to produce hot water.

“This means any hot water used in the factory is effectively generated free. So the staff ablution facilities have hot water, and our curing system has the heat it needs without any reliance on Eskom or boilers, since the system can generate up to 800kW of heat.”

As a backup measure the plant has a 1.2MW boiler fuelled by macadamia nut shells, however, it has yet to be used.

“Burning shells contributes to our carbon footprint, since the shells have a calorific value similar to that of first grade coal. Ideally we don’t want any carbon in a factory area where we are dealing with a product such as macadamias. Furthermore, the boilers also require added labour and maintenance, not to mention huge storage facilities for all the shells. The waste product also has to be removed afterwards and the fire risk is high when so much combustible product is lying around.” 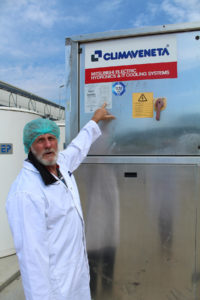 Dorran Bungay designed the system in such a way that all the conditioners and cooling systems are run on the same multiplex system.

While it is mostly impossible to get away from using electricity for cooling purposes on this scale, the facility was optimised to make the best of every unit.

“We have gone to great lengths to properly insulate the factory – this means we keep in what we want in and out what we want out. It means the factory is not susceptible to changes in weather conditions and the inside temperature is more evenly controlled,” Bungay said.

“The system balances the hot and cold air while making sure there is balance without vast fluctuations in temperature. Such fluctuations would not only affect nut quality, but when the temperature has to be brought into balance again it requires more energy. The PLC multiplex system eliminates that risk.

“The multiplex set-up means there is only one refrigeration system supplying all the different cooling systems, instead of a cooling operation for each unit. This is beneficial because is cuts costs, skills and space and you only need one piece of equipment. It also brings a big saving in electricity because instead of multiple cooling systems running simultaneously, it only supplies the cooling it requires, where it is required. This is like having one geyser for the whole house, instead of one for every tap.”

Another aspect that allows for minimal reliance on Eskom is the strong thermal fly-wheel that optimises heat flow. Since the factory’s curing bins are made of concrete totalling more than 500 tons, this provides the ideal material to absorb and maintain the heat needed to cure the nuts.

“Once the curing rooms have been brought up to temperature, the thermal fly-wheel design allows the air to be circulated with the minimum loss of heat. So, all the energy is contained in the curing room and you don’t need to be constantly producing more heat,” Bungay added. 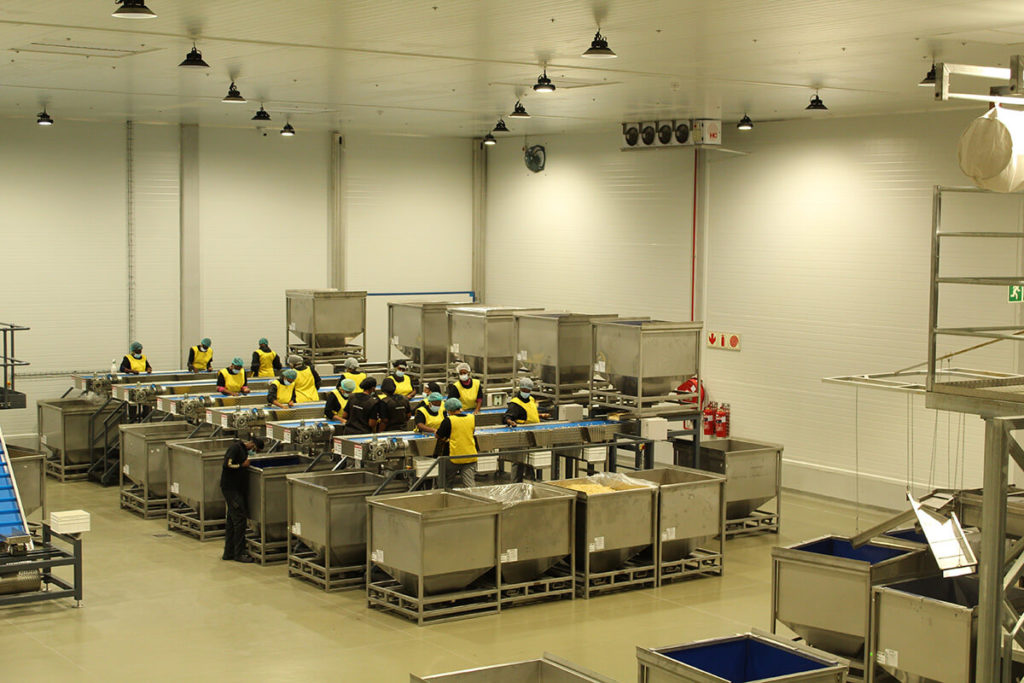 The fully insulated factory keeps the climate stable throughout the factory.

Since curing, unlike drying, is a very precise process, the temperature is relative-humidity monitored and controlled all the time, guaranteeing optimal conditions in the plant. The nuts must all have the same moisture content when they pass through the cracking machines to ensure the blanket treatment is beneficial to all of the nuts and the highest quality is achieved. This makes managing the air flow even more important.

“There are twenty-eight fifty-ton bins, and each has its own fan, but all draw air from one common source,” Bungay said.

“We measure and control the temperature and relative humidity in the process air at the common source to make sure we achieve the optimal equilibrium moisture content (EMC) value that guarantees all nuts are cured to the same moisture content percentage (MC%).

“In layman’s terms, it’s like being at the coast where the air is very humid and wet and trying to dry a wet towel. It will take longer to dry the towel there than if you hung it up in the Karoo, where the air is dry. The movement of air and moisture is such that either you are moving the water from the towel to the air, or if the atmosphere is wetter around the towel, you are moving moisture into the towel. At EMC the moisture in the air and towel is the same, so no movement will take place.

“So, we have to be sure the process air passing through the nuts is always at the right condition to ensure that the unwanted moisture in the nuts moves out into the outside ambient atmosphere. This is achieved by the EMC setting on the PLC that controls both the heating and fresh air inlet, and wet air exhaust equipment designed to maintain the optimum temperature and relative humidity to ensure precise curing.

“The EMC system has three benefits: the nuts cannot be over-dried, which would result in brittleness and style loss during cracking, there is a low curing temperature – typically below 38°C – and a substantially reduced total heating energy requirement. During curing, the PLC monitors the curing progress in each bin and alerts the operator when optimum curing has been achieved. The operator can then immediately dispatch the cured nuts via a dedicated conveyor to the cool store, thereby freeing up the bin for a new batch of wet nuts.”

Global Macadamias can also boast about being the only nut factory in the world that uses a cool store, not a cold store, for preserving nut-in-shell while awaiting processing. This system has several benefits, including a saving on electricity. The cool store is a well-insulated, environmentally controlled room maintained at 18°C to 22°C and 65% relative humidity. This improves shelf-life by reducing metabolic activity in the nuts by four times and guarantees there is no moisture in the air for the nuts to absorb.

The cool store has a capacity of 3 600 tons contained in 150 ton bins. Since the macadamia nut season only lasts five months, but processing can continue for up to 10 months in the factory, it is essential the nuts are kept in pristine condition, so they don’t lose quality or shelf-life while waiting to be processed and exported. The 24 bins allow for nut-in-shell of different quality and size to be stored in a designated bin, giving operators the option of making optimum processing decisions.

In an industry focused on the health and the environmentally-conscious consumer, being able to brand the nuts with integrity is paramount for sustainability.