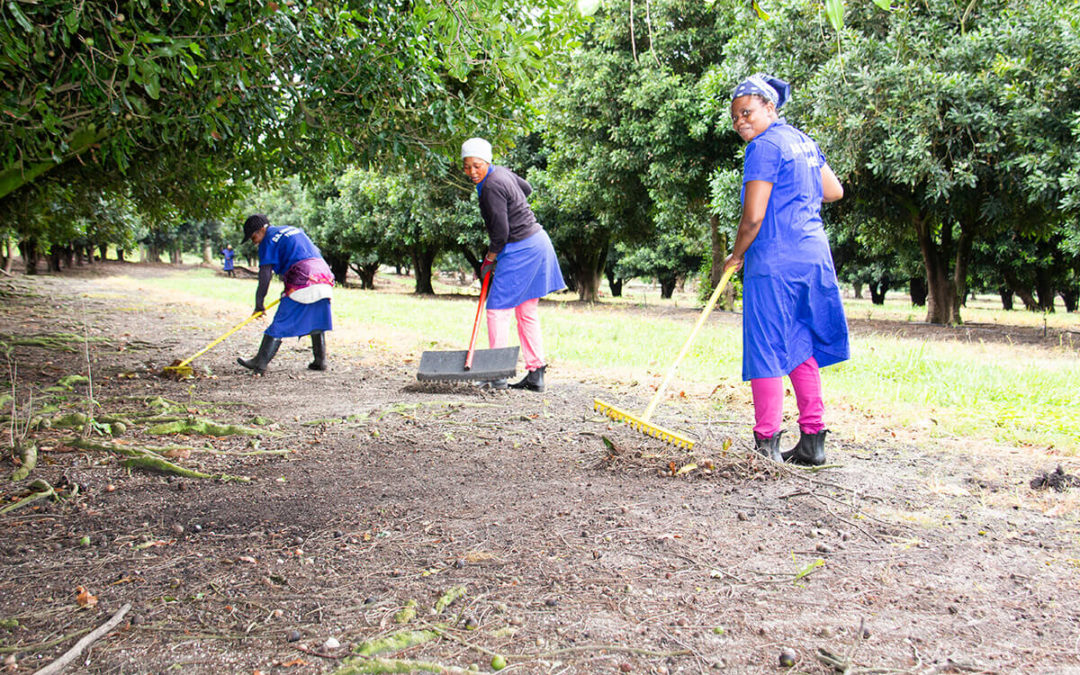 Intensive management is vital if macadamia nut trees are to produce top quality and improved yields year-on-year. Ryan Taylor, who has managed the extensive DR Mattison Group orchards on KwaZulu-Natal’s south coast since 2015, says despite the crop becoming one of the fastest growing industries in South Africa’s agriculture sector, consistent and daily hands-on maintenance and operational strategies remain fundamental for consistent high yields.

Before the sun rises on most days in the picturesque hills inland of Port Edward, pest control expert Jace Chetty and his two scouting teams are already in the vast DR Mattison Group macadamia orchards checking for insect infestation.

“We go into the orchards when it is still dark because the insects start to fly when the sun comes up. If we find more than four bugs across ten trees we notify the management team immediately,” Chetty said, adding that it was also critical to spray as early as possible to avoid any harm to birds and other insects such as bees and ants.

Opening up a hard cover exercise book Chetty demonstrates the meticulous columns of records he has kept since he started in the job three years ago. “Each day I write down exactly what bugs we find, how many of them and in which orchards,” he said.

Ryan Taylor, who has managed the 400ha macadamia operation for more than two years, said the adoption of an integrated insect management strategy was paying off.

“We have had good success with bringing in softer environmental products into our spraying programme. We are also looking at other options to ensure we do as little harm as possible to the environment,” he said.

The trademark yellow Delta Traps, which have pheromones hung from the roof or placed on a sticky card inside them to attract and trap male moths, are hung high in the orchards every one to ten hectares.

Taylor said Chetty’s record keeping was also beginning to show trends across the orchards. “Those records might seem a simple thing, but they are invaluable to us. They provide critical and detailed research on the health of our orchards and how pests are responding to our prevention programme. We also keep detailed records of the yields of each variety and each orchard right down to the produce of an individual tree. For me what separates good and bad farmers is how consistent they are in their maintenance programme.”

While research and technical expertise on the growing and harvesting of macadamia nuts is developing fast in the industry, Taylor said sticking to the basics, such as keeping a constant eye on pest infestation, daily moisture level checks, regular grass cutting, weed control and pruning each tree annually for maximum light, had resulted in an increase in harvest tonnages and the quality of the nuts processed at the Paddock-based Mayo Macs processing plant.

“Every tree is pruned annually. And we are no longer pruning for a pretty Christmas tree shape. We are rather aiming to allow as much sunlight in as possible to increase yields,” he said.

Pointing to heavy clusters of dark green fruit hanging in abundance on branches close to the trunks of the trees, Taylor said it was clear the results speak for themselves.

The trees are irrigated based on computer-linked continuous logging soil moisture probes. “I can check on my phone or laptop any time of the day or week what the moisture content is in the orchards. Keeping the moisture content consistent together with proper nutrition programmes are critical for optimum harvests. We are also looking at drone technology now to improve our moisture content and tree maintenance,” Taylor said.

The Mattison family was one of the first in KwaZulu-Natal to plant Macadamia orchards as long ago as 1977. “Some of the trees are 40 years old here, but they are still bearing well. We pruned them back really hard last year and the result is we have seen a real increase in their yield this season,” Taylor said.

These older trees, according to Taylor, were mainly of the Beaumont variety which can be harvested as late as July and August. “We have a wide variety of cultivars on the farm including 788, 816, A4, A16, 842, 772, 791, 741, 800, Nelmack 2, and Beaumont which is very good for cross pollination. The average age of our trees is about 15 years, although the development and planting of new orchards is ongoing. We are not planting any more Beaumonts as we find they are ready to harvest quite late in the season and we have this mad rush for about two months to get them all to the factory.”

In 2015, the Mattisons were the first macadamia nut farmers in South Africa to achieve a 50% sound kernel recovery from their mature orchards – not only record breaking in the domestic industry but considered a first worldwide! Annually the unsound kernel produced is under 2%. The farms deliver the nuts to the Mayo factory during the harvesting season from mid-February to August. Pruning of the trees starts in April while the Beaumonts are pruned in August and September. The group employs about 200 seasonal and permanent staff.