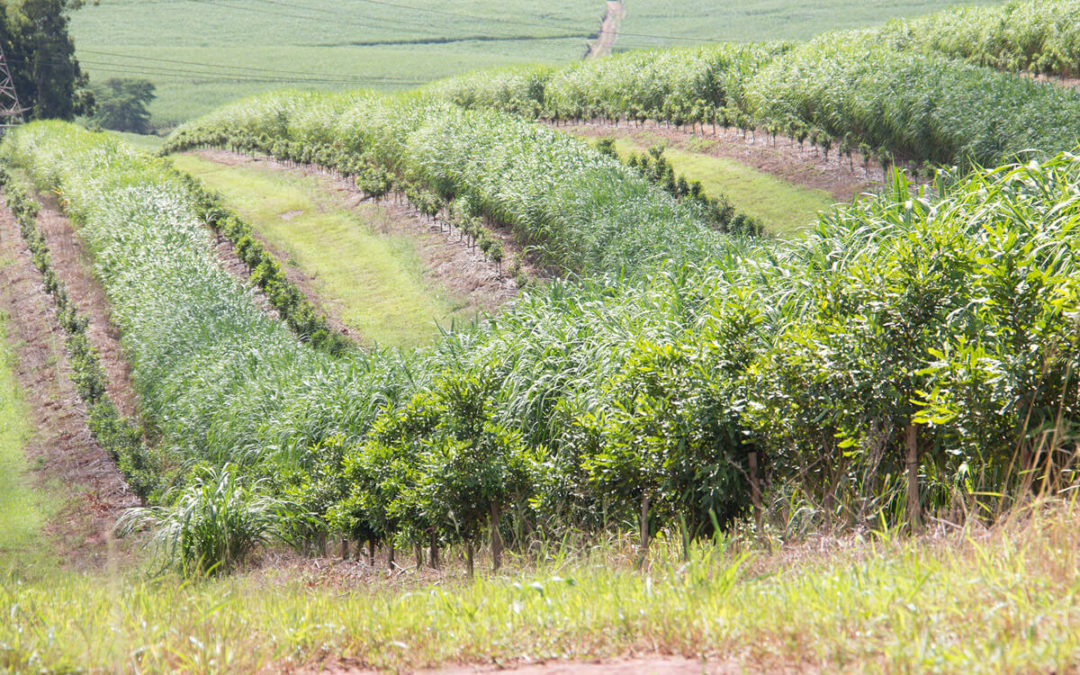 Planting Napier Fodder (Pennisetum purpureum) as a protection against persistent gales in Zululand is proving hugely effective for the improved protection of macadamia nut saplings in newly developed orchards.

Technical Manager at UVS, Sarah-Jane Stewart said one of the biggest challenges in the 470ha macadamia operation was finding a way to protect young trees from the elements. “Wind is one of our biggest limiting factors. We definitely don’t get the growth that farmers in Mpumalanga achieve, for example. Our trees don’t grow as vigorously, but we have now come up with a way to protect our trees and its working really well,” Stewart said.

With a target of another 120has planted to macadamia trees by this time next year, land preparation for the additional orchards – previously used for sugarcane production – is already well underway.

“We start our land preparation a year in advance. Once the sites for the new orchards are mapped using drones and satellite technology, we then prepared the ridges. We turn the soils at depth before planting the rows of Napier Fodder – or Elephant Grass – together with a mix of natural grasses, to hold the topsoil. Once the Napier Fodder has grown to an acceptable height we plant the new trees,” Stewart said.

Through trial and error, the ideal growing conditions using the fodder as protection from the wind are starting to emerge. “We have tried planting the trees between the rows of Napier Fodder and then cutting it down by hand to use as mulch once the trees are established. We have also tried growing the trees close to the rows of fodder. At this stage the latter seems to be the more successful. And rather than cut the fodder by hand we want to use a mechanical chipping machine to break down the stalks faster. The cut fodder also provides an effective mat that smothers weed growth,” she said.

Macadamia varieties planted on the farm include 814s (the best performers during the recent drought), 816s, 842s, 846s and 849s. Further, due to the limited differential between day and night temperatures in the sub-tropical region, the orchards produce nuts with thin shells and good kernel recovery. More recent plantings have included the drought resistant Beaumont variety. The oldest trees on the farm are 12 years old.

About 110has are producing nuts while the rest of the area is planted to young and developing trees.

Water for irrigation is drawn from the nearby Umhlatuze River which also supplies water to the nearby industrial city of Richards Bay.

As most of the producing trees on the farm are still recovering from the crippling drought, currently harvest tonnages are pegged at about 3.5 tons a hectare. “Our short-term aim is to get to 4.5 tons and then ultimately 6 tons a hectare,” Stewart said.

A horticulturalist by profession who farmed macadamias in Mpumalanga for 11 years before returning to KwaZulu-Natal, Stewart said the recent drought in the region had “substantially” informed improved irrigation practices. “We are on a big drive to use mulch. Mulch reduces the water needs of the trees and also reduces the need for herbicides. We are trying to move away from using too many herbicides to improve soil sustainability.”

At the end of each harvesting season the macadamia nut husks – removed during processing – are mixed with kraal manure and mechanically applied under the trees. This mix is used in addition to old prunings and the decomposing fodder stalks,” she said.

And now that the harvesting season is well underway, Stewart said staff were working two shifts to gather in the nuts.

“We employ about 60 full time employees and 80 people, mainly women, on contract during the harvesting season,” she said.

Once the nuts are harvested, two teams specialising in the pruning of the trees, move in to the orchards. “Because we have a very hot and dry September – we have recorded some of our hottest temperatures at this time – through a little manipulation we try to bring our trees into flowering as early as July. That is why we prune the trees as quickly as possible after flowering, so they can rest and recover.”

Because the development of the macadamia industry in northern KwaZulu-Natal is relatively new compared with the more established industries in Mpumalanga, southern KZN and the Limpopo Province, Stewart said farmers were learning together. “We have three other macadamia nut producers in our area. We share information on the spraying of pests such as stink bugs and nut borer, we have regular study group meetings. Farming has really become so much more scientific and that is why I love this particular industry as there is still so much to learn,” Stewart said.