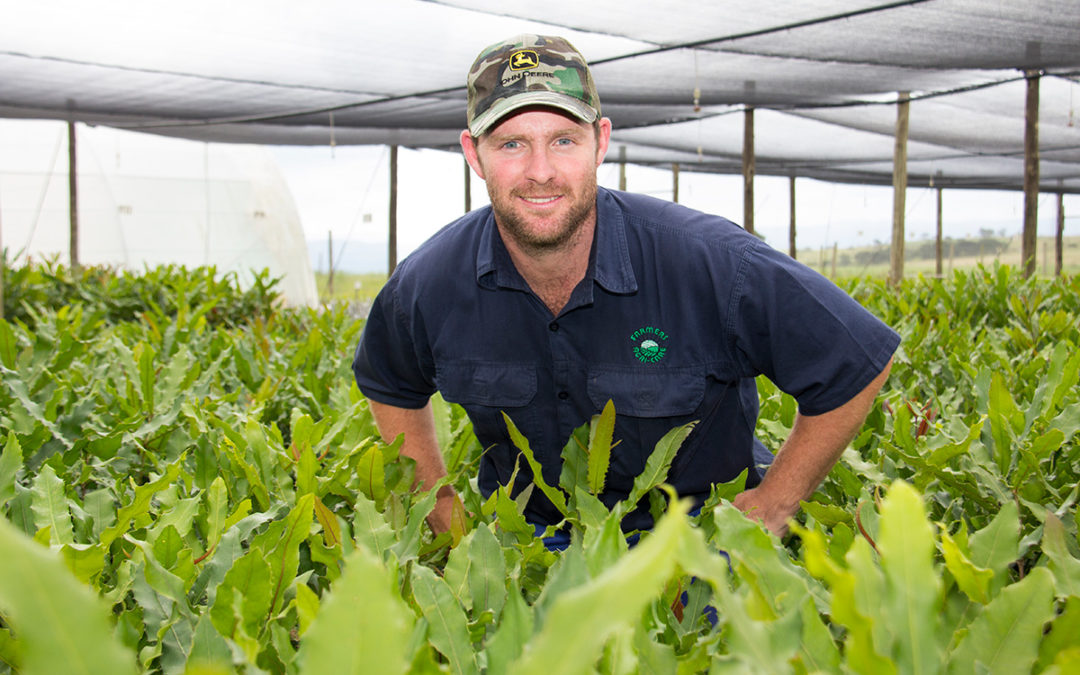 Lessons learned from one of South Africa’s worst droughts in the 2015-2016 season have placed an increased emphasis on precision planning around soil health and water management strategies for the Dunstone family who farm over 400ha of macadamia nut orchards in southern KwaZulu-Natal.

Luke Dunstone and dad Eric, who run their family farm deep in the rural area of Oribi Flats just inland from Port Shepstone, say they are now on a massive drive to soil map their land and to up their game on precision water management systems in a bid to future proof their operation against drought.

“In the driest years – 2015 and 2016 – our yields dropped from 187 tons to 120 tons of macadamias delivered to the factory in the harvesting season. The drought was a real eye opener for us, ” Luke said.

For example, he said, they were able to identify which of the tree varieties coped better with less water.

“Over the years we have planted seven varieties which include 344, 788, 816, 842, Beaumonts and then the A varieties (A4 & A16) to spread the risk in the event of drought or a disease outbreak. The Beaumonts are hardy and coped quite well without optimum water and the 788s came back quickly after the drought. The 816s coped with the heat and sunburn but they struggled to come back when the rains eventually did come. We are learning new things about this industry every day and the drought was a critical lesson for us,” he said.

However, while the drought may have been a setback, plans to increase the land under production from 400ha to 1000ha or 140 000 trees in total by 2020, are well underway. The strategy is coupled with sophisticated irrigation infrastructure to ensure an adequate water supply regardless of any future drought on a farm where the soil is sandy with little clay content.

“At the moment we are drawing water from farm dams for irrigation, but we are also in the process of applying for water use licences for two dams planned to irrigate the new orchards. When completed the dams will give us an additional 500 000m3. The water will be pumped into two reservoirs each with a capacity of 4 500m3.”

Luke said he was optimistic the licences would be approved within the next two years.

Currently the trees are irrigated using micro-jets and 800mm Irricheck soil moisture probes have been installed in a number of orchards. “We have a study group of 12 farmers in this area and a number of us are using the Irricheck application. I can get onto my phone or laptop and check the moisture content of the soil across our orchards at any time. That has been a real game changer for us. We can adjust our irrigation scheduling according to the feedback we get from the probes, resulting in more efficient water use and massive savings on water costs.”

In addition, making their own husk compost and growing up to 80 000 seedlings in their on-farm nursery, were strategies that would assist to make the operation sustainable into the future, Luke said.

“After the drought we pruned quite heavily and we really want to make sure we have good mulch under the trees all the year round – this is another strategy we have gained as a lesson from the drought. We do not remove any material from the orchards and create a natural mulch from the mulched leaves and branches and the husks. We have a big drive on at the moment to get that right. I also don’t believe it is sustainable for us to grow without having our own seedling nursery to draw on.”

Luke, who qualified as a B Tech (civil engineer) at the Durban University of Technology (DUT) before returning to the land where he grew up, said while precision planning was now fundamental to the success and sustainability of the operation, the gift of “hands on” farming was something he had learned from his father, Eric.

“Also soil health is absolutely critical if we want to harvest good quality nuts and have high yields. We have found that the sub-soil acidity was in a really bad state particularly in the sugarcane fields that we are converting to macadamia orchards. By 2020 we want the whole farm to have been converted to macadamias and essential oils,” he said.

Luke said interest in macadamia nut farming was also growing among the neighbouring rural communities. “The potential is really good to increase production of the nuts and it’s the type of farming that would really suit small scale farmers. So we are offering as much advice and support for anyone who asks for it. It is so important that we all help each other here as the existing small farmers were also badly affected by the drought,” he said.