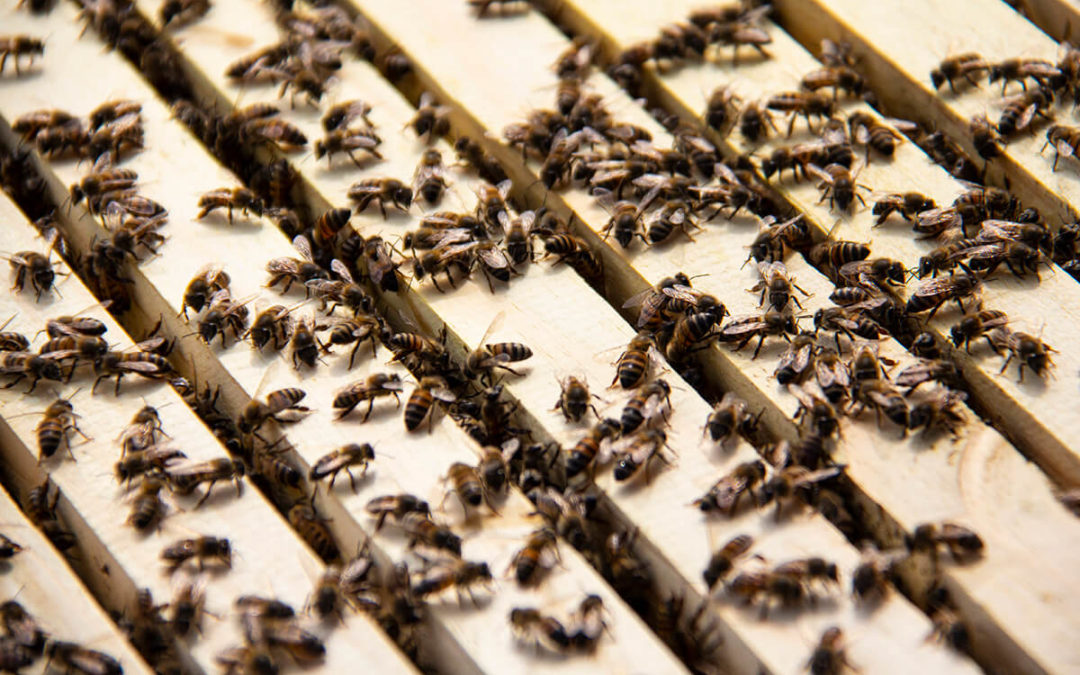 Medieval monks and Egyptians as far back as 2400 BC were fully aware of the value of the honey bee for the production of food.

Honey was the food of the gods and a highly sought-after trade currency in those ancient times.

Regardless of the technological and agriculture advances over the centuries, bees are still fundamental to the production of food. Without them the people and animals of the world would simply starve to death.

And, to bring it closer to home, crop farmers in South Africa, are wholly dependent on the health of the country’s bee swarms to produce food for a population that has burgeoned from less than 40 million 25 years ago to over 60 million today.

Craig Campbell, who is the Chairman of the KZN Bee Farmers’ Association, a member of the South African Bee Industry Organisation and the Managing Director at Peels Honey outside Hilton, says improved communication between farmers and apiculturists is now critical, particularly in the country’s growing macadamia nut industry where demand for bee swarms is outstripping supply.

“At the moment the macadamia nut industry takes up about 40% of our more than 8 000 hives, and already we have seen an increase in demand between last year and this year. The growth is exponential,” Campbell said.

Peels Honey uses its bees to pollinate crops such as sunflowers as far away as Kimberley in the northern Cape, to, apples and cherries in the Free State and macadamia nut trees, litchis, citrus and avocado trees in KwaZulu-Natal.

Over the period of a year the bee farmer harvests about 40kg of honey from each hive depending on the crop and the season. During the recent drought in the country, for example, Campbell said many of the swarms produced little or no honey due to the lack of rain.

During the 2017 season Campbell said they harvested just 200kgs of honey from the macadamia nut orchards in KwaZulu-Natal.

Because of the range of varieties planted in the county’s orchards, bee hives are placed into the macadamia orchards between July and October compared with apples and cherries for example, where hives are required in the orchards for just two weeks.

Campbell said for growers to be assured of healthy swarm supply during flowering, it was now more critical than ever, they talked to bee farmers well ahead of the season to secure their contracts in time to make sure they had a suitable supply for their orchards. 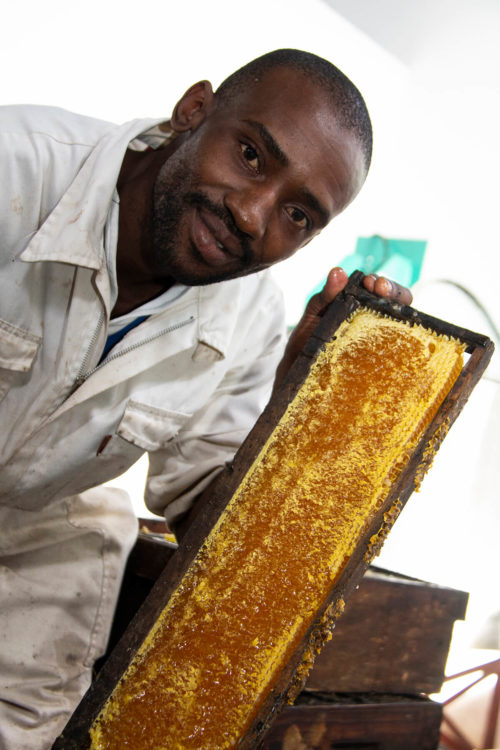 Mphile Majozi prepares a “super” – or wooden frame – with bees’ wax before it is placed in the hive for extraction. The honey on this particular frame was made by bees placed in sunflower fields in the Free State. The wax is recycled and processed into wax sheets which are then placed in the “supers”.

“Unfortunately, there is this debate now between macadamia nut farmers and beekeepers over the cost of the hives. There is this misperception that we make a whole lot of money out of the honey. In reality, though, the bees are in the orchards to do a job. To pollinate the trees for a good nut set. We overload the immediate area with hives to produce a good nut set because less bees means less nut set. As a result, we put more hives into the orchards than usual which means there is less food for the bees. We get very little honey versus the investment we make into the preparation of the bee boxes, protective clothing, feeding of the bees and the cost of labour and the transport we use to get the hives into and out of the orchards.”

Further, during the off season it was critical to keep the bees in areas where they could find food to keep them healthy, he said.

“We have to remove the hives from the orchards in the off season because there is too little forage for them. The other debate is the use of pesticides. Again, this is where it is so important that growers and bee farmers are talking to each other. There are bee friendly pesticides and there are ways that the trees can be sprayed for pests – at night for example when the bees are not active – that will ensure the bees are protected.”

Campbell says he’s very careful not to stress his bees. “Very few people know about the term “fat bees and skinny bees”. Bees get protein from pollen and then carbohydrates from nectar. If the bees only get a single source of pollen and nectar for extended periods of time this can be unhealthy for them. To have healthy bees they have to keep getting enough food and a balanced diet. This creates a dilemma for us. We battle to keep colonies strong and healthy throughout the year, so we have to move them to different areas to make more food available to them.”

He said ideally growers should be placing at least five hives per hectare for an ideal nut set. “Some farmers are happy with three hives per hectare, but we believe it is more effective to have between five and seven hives in a hectare. Also, it is very important where the hives are placed in the orchards. Research has shown that the trees closest to the hives will have the better nut set, so it is no good putting all the hives in one row, or to the side of an orchard.”

Growers should also only use bee farmers that were registered with the Department of Agriculture which was a requirement by law, Campbell said. 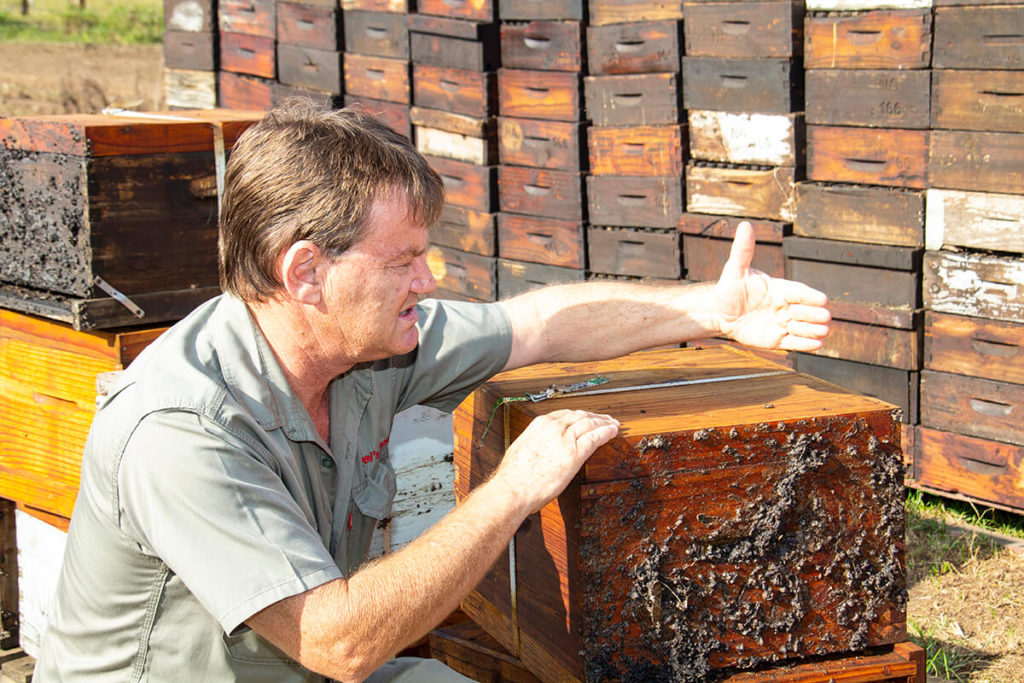 Chairman of the KZN Bee Farmers’ Association and Managing Director at Peels Honey, Craig Campbell explains how wild swarms are attracted to domestic hives by smearing wax and honey onto the outside and inside of the boxes. He says the hives then smell “just like home” for any wandering swarm