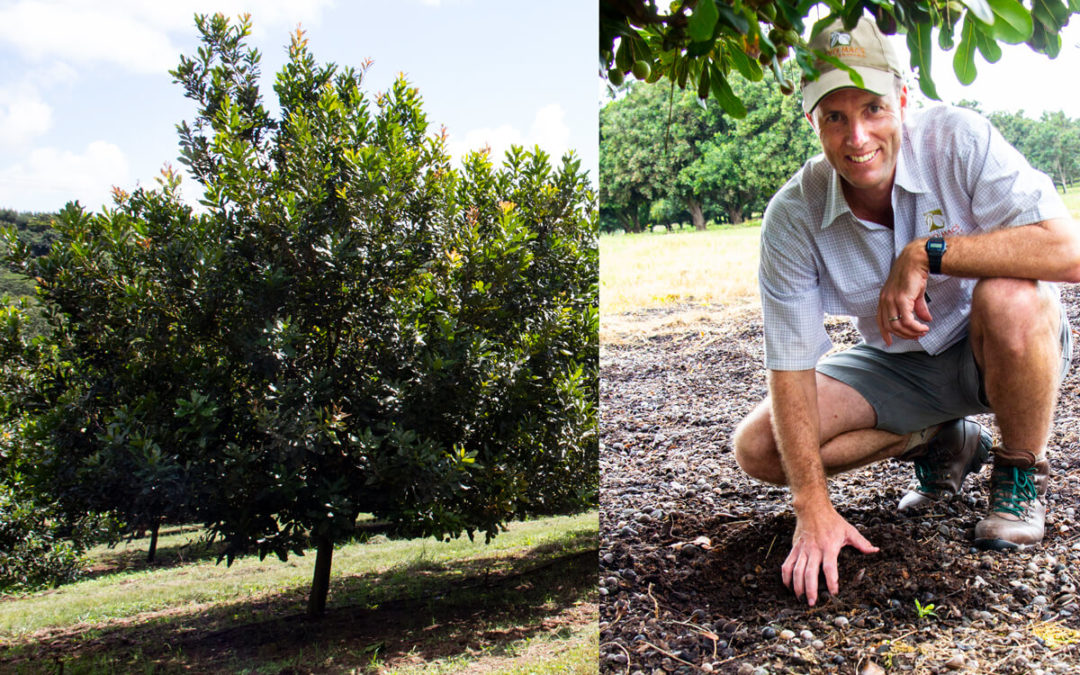 As the harvesting season is in full swing, Mayo Macs Technical Manager, Andrew Sheard says management practices for May to July should prioritise nut maturity, harvest efficiencies, drying methods and pruning the trees in preparation for next year’s crop.

“Pruning the fruit bearing trees is crucial for opening up the canopy to allow sunlight in, to improve spray efficacy and allow for the development of the bearing wood for the next season’s crop,” Sheard said.

Mature nuts should be harvested every 7-10 days and de-husked on the same day, he said.

“Nuts left in their husks can increase their temperature significantly if left for longer than 24 hours. It is also very important to adjust the de-husker for the larger, late cultivars such as A4 and A16. And then conducting a maturity test before stripping the orchard is crucial. By this stage of the season it shouldn’t be necessary to use a water bath to float the nuts, only if borer or nut immaturity is an issue.”

Ethapon sprays used for ripening, Sheard said, should not be applied to stressed trees, but rather they should be irrigated two days before spraying, and then the spray should be applied on warm to hot days using high volume sprays allowing for thorough coverage of the nut.

“Also spraying after mid to late June could negatively affect next season’s flowers and crop,” he said.

Sheard said nuts should be cured in the drying bins for at least five days and nuts delivered to the processing plants or depots should be at a moisture content (MC%) of 10% or less.

“It is advisable not to exceed a curing or drying temperature of 32ºC because it can result in the nuts curing or drying too fast. A safe limit for moisture removal is at 2% a day. High moisture content and high temperatures can possibly cause discoloration and internal browning. And then on the other hand, over drying could result in brittle nuts meaning the grower will have fewer whole nuts,” Sheard said.

Further, he said, when using ambient air for curing there was a chance of the nuts developing mould because of the drying and re-wetting the nuts which was exacerbated by the current wet weather conditions. “We advise growers to run the fans continuously for the first one to two days after placing the wet nuts into the bins, then to switch the fans on at sunrise and off at sunset. This, by the way, doesn’t apply to bins using heaters,” he said.

Sheard said growers should have at least 30% of their total crop available for on-farm-storage.

Hand sorting once the nuts were delivered from the orchards to the on-farm drying facility should result in nuts with dark shells being removed, also any germinated nuts, those damaged by nut borer, those with pale shells or those with cracked shells. “It really is important to sort the nuts again after the drying phase to check for any nut borer or false codling moth damage.”

Sheard said soil applied nitrogen fertilisers were usually not necessary now or should not exceed 10% of the annual nitrogen requirement unless blocks or cultivars were showing low leaf levels.

Apply Zinc (Zn), Cu (Copper) and Boron (B) as soil applications in May and April.

“Post-harvest applications of soil nitrogen to Integrifolia (Integ) cultivars should only be done if the leaf nitrogen levels are more than 1.2%, or if the cultivar bore a crop of over four tons a hectare in the season. About 5 to 10% of the annual soil nitrogen requirement for these cultivars should be applied in April or early May,” Sheard said.

Also 15 to 20% of the annual potassium requirement should be applied in April and early May and both lime and gypsum could be applied simultaneously, he said.

Despite the recent rains, Sheard advised growers to keep a close eye however on soil curves using the soil moisture probes and while it was safe to allow soil moisture levels to decrease it was important to keep them maintained within the autumn and winter “norms”.

“I would say the water requirement in the orchards now is typically about a third of the November to January peak periods. Also weed control is not an issue now as the temperatures are much cooler and soil moisture is decreasing,” he said.

Scouting for pests was an ongoing necessity particularly among the late cultivars as stink bugs, for example, could continue to damage the crop, meaning spraying should continue, however, chemical withholding periods should be adhered to.

Sheard said if husk rot and blossom blight were a problem in specific blocks or cultivars during the season, he suggested the application of fungicides during June to reduce disease. “It is very important that any “stick tights” caused by husk rot are removed during the harvest. Doing this prevents the build-up of disease ahead of the new season. Farmers must also make absolutely sure they are using the latest Southern African Macadamia Growers’ Association registered chemicals and the Maximum Residue Levels (MRLs) list,” Sheard said.