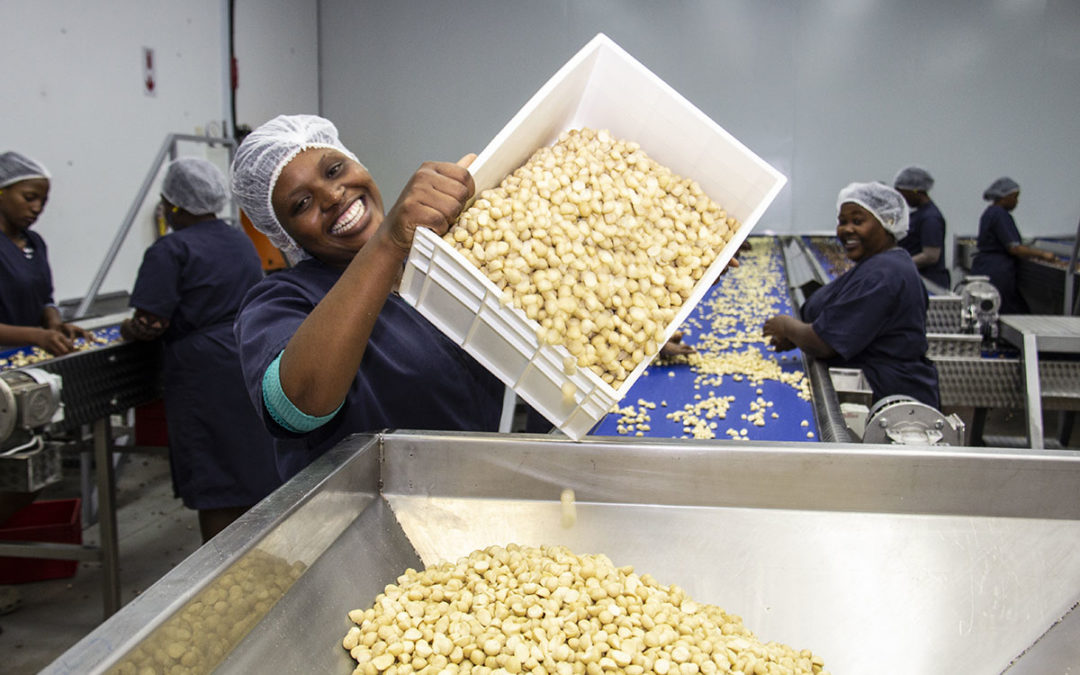 A multi-million upgrade to the Green Farms Nut Company Coastal Factory on the KwaZulu-Natal south coast has enabled the facility to double its capacity to meet demand.

And expectations are that as sugarcane growers continue to diversify their operations at least 1 000ha of additional macadamia nut orchards could come under development in KwaZulu-Natal by 2020.

Ann Baker, General Manager at the plant on the outskirts of Ramsgate, says a major refurbishment and upgrade during the 2017/18 off-season means the factory now has the capacity to process up to 4 500 tons of macadamia nuts a year – more than double the 2 000 tons previously.

“When I was first appointed to the position of General Manager in 2007 we were processing less than 1 000 tons a year at times – now we are processing almost 3 000 tons! The growth in the industry is exponential and we are now ready for it.”

With the 2018 harvesting season well underway, Baker said the factory was trucking out the processed kernels at a rate of about 25 tons a week with the almost 170 seasonal staff working double shifts to cope with harvested nuts arriving from as far away as northern Zululand and George in the Western Cape.

Kernels from the factory are shipped to the United States, Europe, Japan, the United Kingdom and the Far East which underlines the company’s philosophy to sell into all the macadamia markets rather than focusing on a particular region.

As a result, the risk for both the Green Farms Nut Company and the grower is spread, which is fundamental to building a global market for the domestic product.

“We believe this is what differentiates us. At least 95% of our product is exported as kernel, rather than nut-in-shell, which is in huge demand in China. The problem though is the Chinese then process the nuts and export them to countries where we already have customers. They are creating competition for us using our own products. But by supporting all markets we are introducing our macadamias to new customers and not simply focusing on what could be an easy option,” she said.

The Coastal Factory was first built ten years ago by local farmers. “Back then most farmers would send their crop all the way to Mpumalanga,” she said. 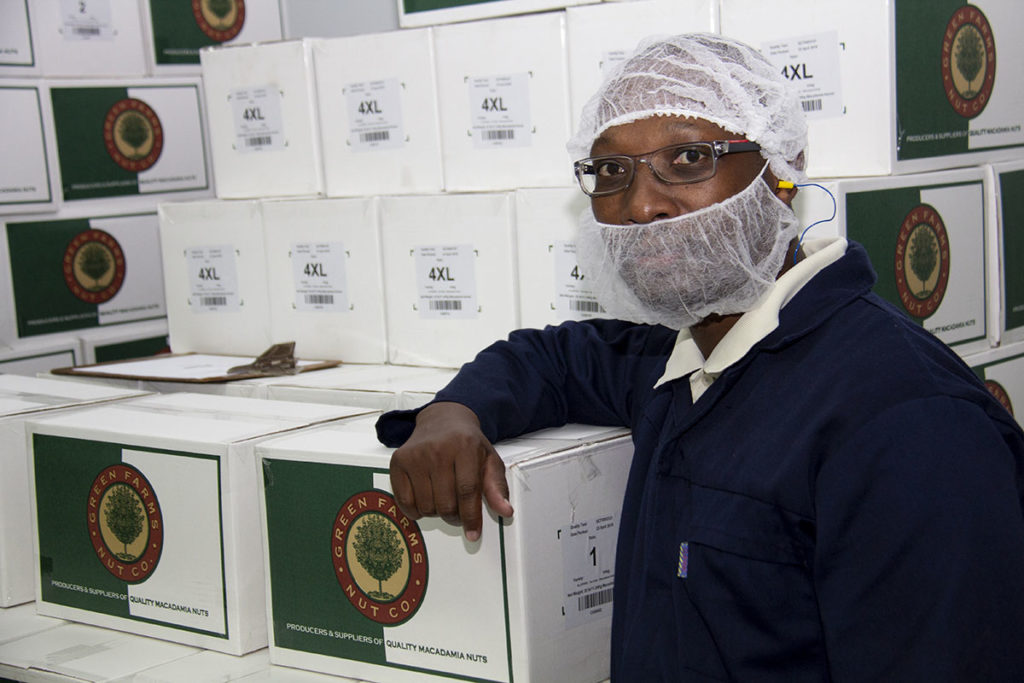 Nico Neethling, who is the Technical and Horticultural Advisor for the Green Farms Nut Company – the family group bought the factory in 2006 – said his understanding was that at least 1 500ha to 2 500ha of macadamia orchards were being planted on average across the country each year and at least half of that was in Mpumalanga. “We anticipate the rate of orchard growth to remain at similar levels so that means an increase of about 3 000ha to 5 000ha under nuts by 2020,” Neethling said.

Baker said the increase in capacity at the factory had resulted in more work opportunities for local people in an area where jobs were hard to come by. “I have seven permanent staff and the rest are seasonal contract workers. When we start up at the beginning of each harvesting season we give priority to those who have worked here before. Then, if there are any vacancies, we fill up with new people, but all from the local area. All the staff are then trained, those who have worked with us before have a refresher course,” Baker said.

But it is the FSSC 22000 or Food Safety System Certification that Baker is particularly proud of. “I believe this was the first macadamia nut factory in the world to achieve that accreditation. We are very strict on quality control; checks and balances are in place right the way along the processing line. All our product is fully traceable. Each farmer’s crop is processed separately. And we reward those farmers who deliver high quality nuts with discount prices and we penalise those who send in a crop that does not meet the standards criteria.”

Baker said while farmers were advised ahead of the season of the prices they could expect for their harvest, at the close of the season if further profits were made on the back of favourable exchange rates and better sale contracts, these were divvied up.

“This is a strong point of ours, we pay the farmers on the actual nuts they deliver and then if there are extra profits at the end of the season they benefit from that as well. Our record keeping on each farmer is comprehensive and accurate. In fact, if one of our customers has an issue with the product delivered to them we can trace those back to each batch delivered,” she said.

Farmers who delivered their crop to the Coastal Macadamia Factory were also kept abreast of best harvesting and growing practices. “Our Extension Assistant, Butch Aylward, visits our farmers regularly to assist them with technical advice. This is so important to us for maintaining the quality of our product, as well as ensuring the nuts come into the factory according to a well organised delivery schedule,” she said. 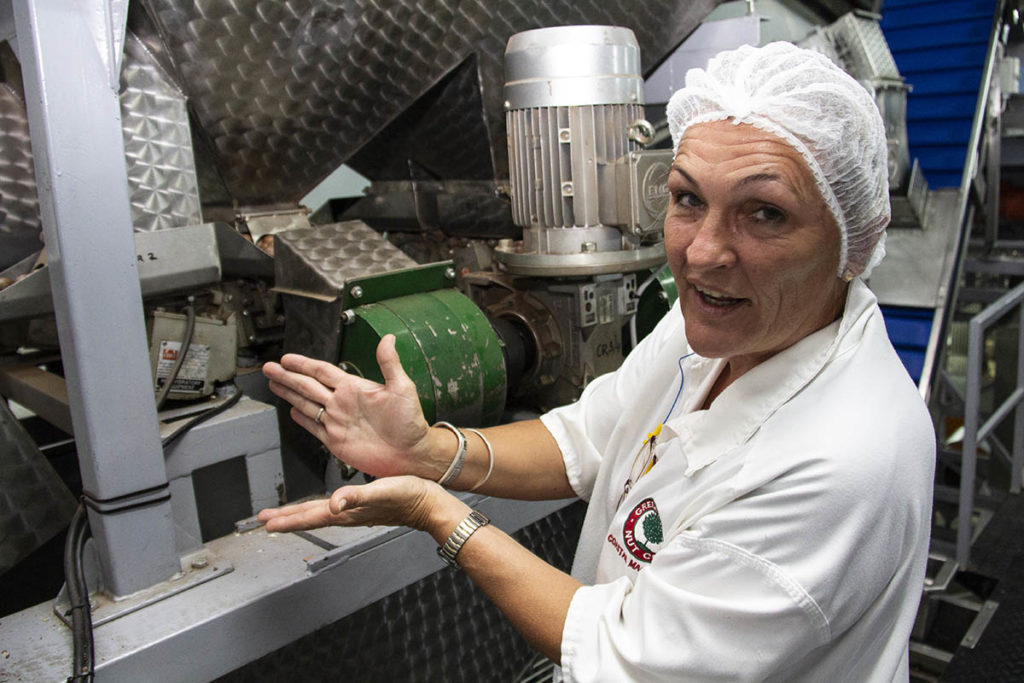 General Manager at the Coastal Macadamia factory Ann Baker explains how state-of-the art machinery in the facility cracks the nuts.