Shining a light on tree pruning 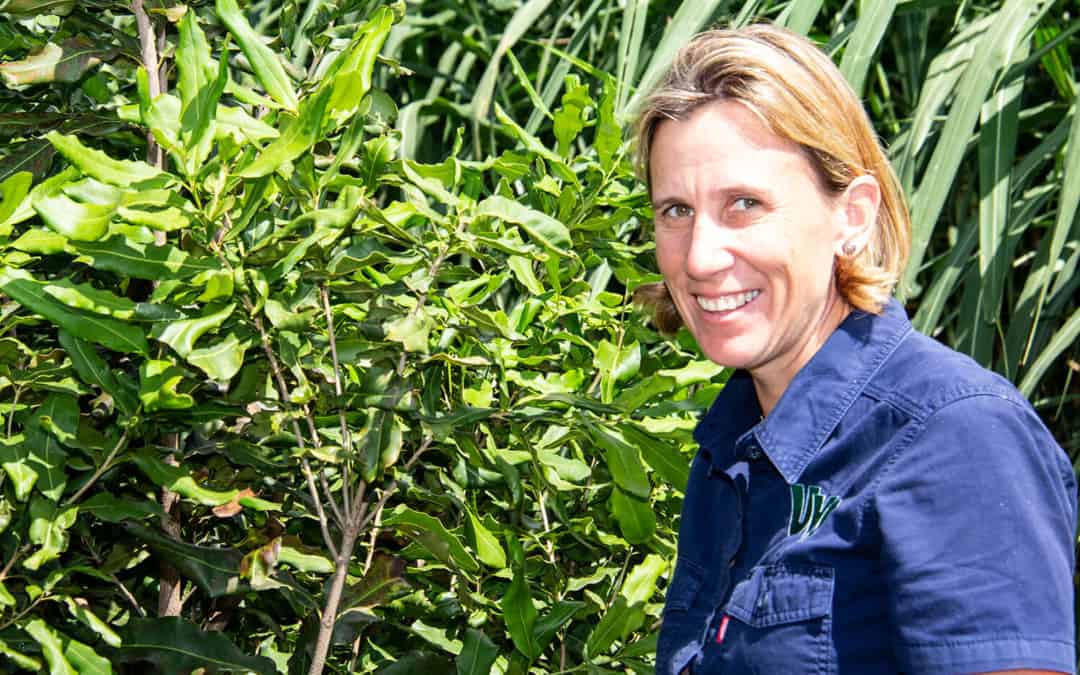 Trials held in South Africa and Australia to measure nut yields in macadamia trees have revealed that failure to prune regularly results in a significant drop in tonnages as the trees mature.

Sarah-Jane Stewart, an independent consultant to the industry and a technical advisor at the processing company, Mayo Macs, told growers at a recent industry day that the trials had shown the more sunlight that is allowed into the tree the better the yields, while incorrect or no pruning resulted in the development of management “issues” in the orchard and a marked reduction in nut bearing.

She said in on-farm trials the cultivar ‘791, planted 4.5m by 3m apart and not pruned, produced nine tons of nut-in-shell in their eighth year.

In their ninth year, however, yields on the same trees dropped to as little as three tons nut-in-shell.

“Yield in a macadamia orchard tends to increase as the tree grows in size up to a point but the trials have shown quite clearly that once they reach a certain age or size, and if they are not pruned, they stop producing optimally,” she said.

Stewart said pruning was done to keep the tree to a pre-determined size to ensure the sun was able to get into the canopy and to keep rejuvenating the orchard over a five to ten-year cycle.

“Once an orchard reaches maturity and to keep the trees to a manageable size it is really important that the same percentage of foliage is removed equal to the new growth that has grown in a season. If the branches don’t get enough sunlight, they stop growing over a period of time and eventually die off. If an orchard is overcrowded the trees use all their energy to grow foliage to stay ahead of neighbouring trees rather than producing nuts. Also pruning must be done in such a way that the bearing branches are kept young. If only the outer foliage is removed the inside branches will become old and die,” Stewart said.

To create pyramid-shaped trees and to produce ideal nut bearing units, the trees should be cut back with care.

“First, if there is a competing central leader, it should be removed and branches overshadowing the lower branches pruned while old, thick branches that have little in the way of complex growth on their stems, should also be removed. The prune must be done as soon after harvest as possible, ideally using very sharp hand saws or pole pruners/chainsaws between 1.5m and 3m from the ground,” she said.

Stewart said the reasoning was the tree would have time to rest, or become dormant, before starting to produce fresh shoots.

Once the big cuts were made the next step – which was usually done after the first pruning – was to “skirt” the tree and trim the width and height.

“The purpose here is to keep working areas open and restrict the height of the tree shoulders. For this job the quickest and most effective method is to use pole pruners or chainsaws to avoid damaging the emerging flowers and to make sure the work is time efficient.”

Cleaning up the initial “big” cuts, Stewart said, should follow in October and January/February when any water shoots are removed using secateurs or by hand.

If farmers followed these important steps in their pruning regime they would not only increase the light into the trees but also increase the active bearing wood resulting in a dense and high-quality crop, she said.

Correct pruning practices also made effective pest spraying and harvesting easier while stripping the trees was simplified as they were kept at a manageable height.

Further the long-term health of the orchard was guaranteed because the trees were continuously rejuvenated.

Stewart said further trials in Australia had showed trees pruned in autumn flowered better compared with those pruned in winter. These trials were done on the ‘849’ and ‘A268’ varieties.

“The A268, which flowers later than other cultivars, showed no effects in the first season but there was a big difference in the second season,” she said.

The study also showed younger trees pruned a season prior to flowering produced a “staggering” flush development and more racemes setting fruit than the trees that were not pruned.