With an extensive background in farming and the corporate side of the agricultural sector, Allen Duncan is perfectly poised to lead Green Farms Nut Company (GFNC) from the CEO’s chair.

While Duncan has cemented himself as a leader in the macadamia industry, striving for efficiency and excellence, it was his time as the managing director of a pineapple processing business that earned him a reputation as a tenacious businessman who will go to great lengths to ensure the success of a company, its workers and the farmers dependent on the business. Today these qualities make him a sought-after employee, in a prime position to run GFNC.

After completing an agricultural management degree, Duncan farmed in partnership with his father, and later his brother, in the Eastern Cape. The diversified operation that produced various cash crops, Bonsmara cattle and pineapples gave him a solid foundation in farming. At the time he served as chairperson of pineapple processing business Summerpride Foods in the Eastern Cape, granting him an opportunity to understand the value-add side of farming.

But a better life in Australia loomed on the horizon and while his family’s emigration papers were being sorted out, Duncan was offered the position of managing director of Summerpride Foods when the previous incumbent left abruptly. While it was supposed to be a temporary position until his emigration papers came through, as fate would have it, events changed drastically and Duncan found himself knee-deep in what would become one of the toughest periods in the pineapple industry.

He recalls, “The person handling my emigration documents got delayed and in the meantime I turned 40 – which made a considerable change to my eligibility for emigration. At the same time I started uncovering numerous problems within the factory that could have sunk the entire operation. The canning factory was the biggest in the Southern Hemisphere at the time – there were 1400 people in the factory and 2500 people on the farms who would have lost their jobs if the factory went under. The board then made me an offer that I couldn’t refuse, to stay on.”

As the new managing director, Duncan rolled up his sleeves and set about streamlining the factory and improving efficiencies to repay the factory’s debt. “We had to lay off staff and increase the capacity. Increasing efficiency was key and simple things that had been neglected in the past were sorted out. For example, we had people sorting on the conveyor belts in bad lighting and those whose eyesight was bad couldn’t see properly.” 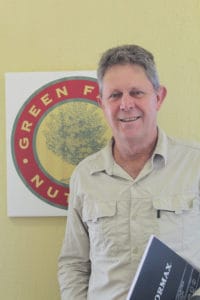 After several improvements in the factory’s operations, the future of the business started looking rosy once more. “And then the cadmium disaster happened. Farmers had been using fertiliser that was contaminated with cadmium and we had processed products with levels of cadmium that were over the prescribed limit. We marketed the canned pineapples in 34 countries worldwide and were faced with the possibility of having a global recall of our products.

“But after much research I realised that the levels were not toxic and were actually still 25 times less than the allowed cadmium levels in potatoes. I also realised that the tests were being conducted on the juice concentrate and not the diluted version that would ultimately be consumed.”

Armed with this information Duncan managed to prevent the recall and effectively avoided a complete shutdown of the pineapple industry in the Eastern Cape. It is this kind of steadfastness that makes for a CEO sought after by any company and Duncan was soon offered an opportunity to head up Golden Macadamias in the Lowveld, where he spent eight years before being lured by Johannesburg Stock Exchange-listed company Crookes Brothers in KwaZulu-Natal.

But the appeal of the macadamia industry could not be muted, much less Duncan’s love for the Lowveld. “I believe in macadamias. It’s an industry that is on the rise in world health trends and eating habits. While other industries like sugar and beef are coming under the hammer for their adverse health effects, the nut industry will continue to rise in a health-conscious world.”

In January this year Duncan took over from Jill Whyte, who stepped down as CEO to take an active role as GFNC’s executive chairperson.

Commenting on his appointment Whyte said that Duncan would be integral to successfully implementing their strategy to take advantage of the market opportunities ahead, on behalf of their growers. “Duncan has a proven track record of delivering growth – making him the ideal candidate to lead GFNC. He is a renowned international speaker on the subject of macadamias and his deep sector knowledge and strong relationships with macadamia farmers across South Africa and customers around the globe make him a trusted ally.”

Duncan said it was an exciting time to be involved in the macadamia revolution and GFNC had a lot to offer the SA industry with the big crop on the horizon. “No other business has through-the-line investment in the industry, from farming, to processing, to being one of the largest marketers of product around the globe, as well as creating value through product innovation. This exposure enables a truly macro view of how the industry will evolve.”

In his new position he will be focusing on increasing production, efficiency and quality so that ultimately the farmers have more money in their pockets.

“I’m a practical person and value productivity and efficiency. One of my biggest passions is motivating people to do their best and to want to work rather than having to work. Little things like how you speak to someone or ask them to do something make a big difference – people must be treated with dignity and trust. It makes a difference telling a tractor driver the outcome you want – like making a straight line in the field – rather than telling him how to do it. If you tell someone how to do something they have been doing their whole lives, it’s degrading. Give them an opportunity to do things on their own and instil in them a sense of pride in what they have accomplished.”

Duncan notes that in lieu of processing capacity, keeping ahead of the curve to ensure a smooth-running factory is paramount. “Technology in factories will improve in the future in terms of cracking and sorting methods and it will be vital to ensure the industry is not left behind, or we will be exporting nuts to be processed abroad.”

He believes a good processor should be streamlined and focused on quality. “Furthermore the market development side should be fully developed to branch into various markets and explore product development, as is the case with GFNC. There should also be a focus on human capital and as such we have a good team here. High staff turnovers scare off the farmers and the buyers so there must be continuity. The Whyte family is fully involved in the business and they are not going anywhere. This gives the market confidence in our company.”