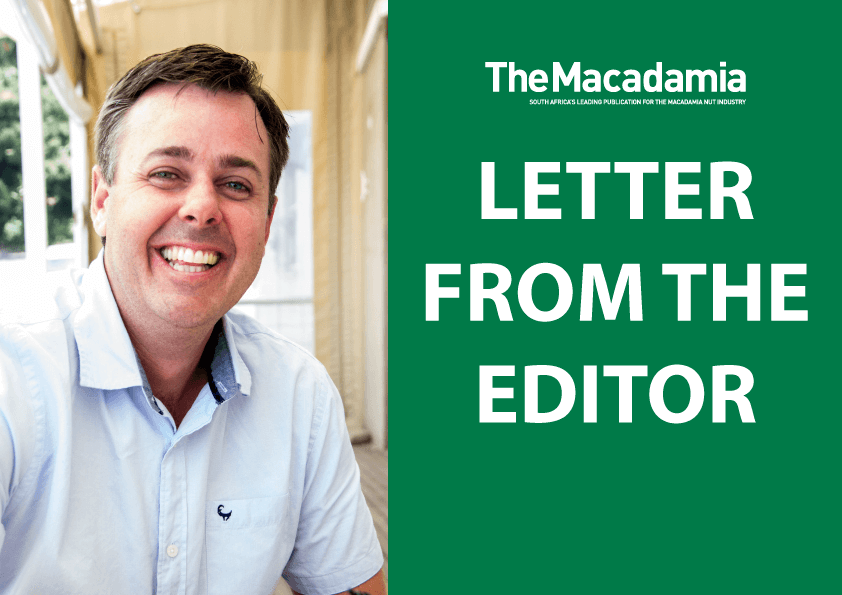 Despite a turbulent year predicted for the rand which could impact on returns, the increasing global demand for the crop has meant the price is predicted to exceed last year’s offering according to processors Mayo Macs and the Green Farms Nut Company (GFNC) which met with shareholders and farmers across the country during scheduled pre-season road shows.

to continue to break into niche markets particularly in the USA, Europe, Japan and South Korea where consumer demand for kernel has grown by 9% since about 2017.

The marketing companies for both Mayo Macs and GFNC have warned that the ever-increasing demand for South Africa’s macadamia nuts worldwide means farmers and processors have to make sure their businesses are “ready for the future”.

In this edition of The Macadamia, you will read about how KwaZulu-Natal’s largest macadamia nursery, T&T Agric at Ifafa Beach on the South Coast, has more than doubled its output of micro-grafted macadamia trees as farmers in Zambia, Malawi and northern Mozambique plough out their maize and soya crops in favour of the development of macadamia orchards.

In Zambia where soil is fertile, the land flat and water plentiful, farmers are planting up to 100ha of macadamia orchards at a go, compared with the average of about 10ha planted by South African farmers at any one time.

Colin Rand, the horticulture managing partner at T&T Agric is also on a drive to halve the price of young macadamia trees to make it easier for sugarcane farmers to finance the diversification of their operations as the sugar industry outlook remains bleak on the back of the increased Health Promotions Levy and the record low sugar price on world markets.

We also highlight a programme developed by Lowveld farmers to train young graduates to meet the growing demand for top management skills in the sector.

The programme – called Recruitagri – has recently accepted its second group of interns with learning geared towards both practical and theoretical training to make sure the youngsters are work-ready once they complete the year-long course.

Then there are technical articles covering topics such as farming for increased nut quality, precision drainage in the orchard and the issue of iron deficiency in the soil.

Mpumalanga expert and consultant, Kobus van Niekerk outlines how tree growth can be manipulated to prevent structural weaknesses and breakages once the tree matures and starts to yield.

At the start of the new season our hope for all those involved in the industry is that the current positivity continues and grows into the years ahead.

We hope our readers enjoy this edition as much as we have putting it together.