Optimally drained soils are crucial to orchard health, ensuring that trees receive adequate water, oxygen and nutrients. We spoke to Johnnie van der Walt from Precision Drainage about the benefits of a subsurface drainage system in combatting waterlogged orchards.

For successful macadamia nut farming, optimal irrigation practices must be followed, requiring an understanding of how the soil profile will react when water is added. If drainage is inadequate, it will result in a lack of oxygen in the soil and reduce the plant’s ability to absorb nutrients. This places stress on the trees and results in lower yields.

He said subsurface drainage systems not only prevent trees from drowning but also reduce soil salinisation.

“In many areas the irrigation water salinity is gradually increasing as the upstream catchments supplying water become more saline. For productive agriculture to continue, adequate leaching and drainage is necessary to remove salt left in the root zone.”

Elevated water tables result in the mobilisation of the stored salt and when this saline water table comes close to the soil surface, it results in soil salinisation and waterlogging, with detrimental effects on production. “Subsurface drainage will treat waterlogging and salinisation resulting from these shallow water tables. It is also required where more saline irrigation water is used. With increasing irrigation water salinity, the leaching requirement is increased, which often cannot be met by natural drainage.”

He added that subsurface drainage does not remove available water from the soil; it merely removes gravitational water that would drain naturally if unimpeded by confining layers in the soil. “The greatest benefits of subsurface drainage typically are realised in wet years, but because drainage promotes deep root development, crops will have better access to soil moisture in dry years.”

It was important, Van der Walt said, for farmers to ensure proper drainage systems are in place, otherwise tree health could be negatively affected

In overcoming drainage problems, farmers should first identify soil properties through a credible expert. “Subsurface drainage requirements are determined by the natural soil properties, either physical, chemical or a combination of both. So farmers must first do a proper soil analysis before installing a subsurface drainage system. A general rule of thumb is that the higher the clay content, the more artificial drainage is required, as the permeability of the fine textured soils is slower. Soils with shallow restrictive layers can also pose drainage problems as the effective root zone does not have the capacity to accommodate excess water.”

The following important points must be considered when installing subsurface drainage.

Depth and spacing of pipes is determined by soil structure and texture properties that need to be sampled and analysed beforehand. Drainage pipe depth is mainly determined by the depth of the restrictive soil layer. Generally, finer textured soils are spaced closer than that of coarse soils.

Subsurface drainage installation can be either via conventional trenched drains or modern trenchless drainage, also referred to as tiling, depending on soil properties.

The former is labour intensive and takes some time to install correctly as many manual processes are required. On average about 300-400 metres per day is possible, while tile drainage is mechanised and automated and can install, depending on soil condition and type, upwards of 4000 metres per day.

The tiling method, which uses GPS technology, is a quarter of the cost of a conventional trenched drainage system. It requires no labourers or the addition of crusher stone as the drainage pipe is ripped into the subsurface by a specially designed plough that installs the pipe automatically on the correct slope and gradient and forms a perfect hole for the pipe. This, therefore, does not destroy the soil profile above or below the pipe, so does not require the crusher stone layer above the pipe. It should be mentioned that subsurface drainage works from the bottom up, so the water flow enters the pipe from the bottom, not from the top, because of capillary action.

Drainage amount is based on the soil properties and pipe spacing, soil stratification, pipe size, slope and depth (a deeper drainage pipe takes longer to drain).

It is important to ensure the drainage system is self-cleaning: this is designed to flush out small dead hair roots and sedimentation.

There are three main factors that influence the cost of subsurface drainage systems:

The cost of subsurface drainage systems in South Africa installed by GPS-controlled drainage ploughs ranges from R10 000 per hectare to R25 000 per hectare, depending on soil physical properties. The return on investment is between one and five seasons.

Excess salts from irrigation or rain water causing soil salinisation can be leached out of the root zone.

Plant roots are grown deeper into the soil so they can absorb more nutrients.

The chances of water-borne diseases are reduced.

Since the soil can absorb and store more rainfall, runoff from the soil surface is reduced, so soil erosion is reduced.

Soil structure is improved. Soil needs to be drained to avoid soil compaction and structural damage, both of which reduce yields.

Soil bearing strength is increased. The bearing strength of soil depends on its water content, which in turn is affected by the depth of the water table. Good soil drainage increases soil strength and reduces damage caused by farming operations. 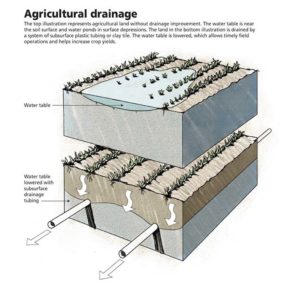 Besides solving waterlogging in orchards, subsurface drainage has far greater potential when considered as a means to harvest excess water. Van der Walt said existing irrigation can benefit from irrigation water recycling through underground drainage systems that, when combined with the rainwater harvesting systems, greatly improve water management and availability on the farm.

“The concepts of rainwater harvesting on a commercial scale, drainage water recycling and reuse and subsurface irrigation and fertigation, are still new, having come to attention due to South Africa’s water scarcity and prevalence to extreme droughts.

“However, through subsurface drainage systems, the whole farm can effectively be harnessed as a catchment area. Measurements taken through a Global Navigation Satellite System (GNSS) provide accurate topographical data of the farm, which identifies where the runoff and natural waterways occur. This can be used to determine where to place dams in the lower lying areas of the farm so they can receive and store the water that has been diverted through the drainage systems.”

Van der Walt said this concept, however, requires a change in mindset from the farmer’s side and a complete change in how a farm is managed. “We need to move from a passive to an active solution to climate change. In short, the technology we use makes it possible to change the entire farm into an active catchment area to accommodate and store as much rainwater as possible.”