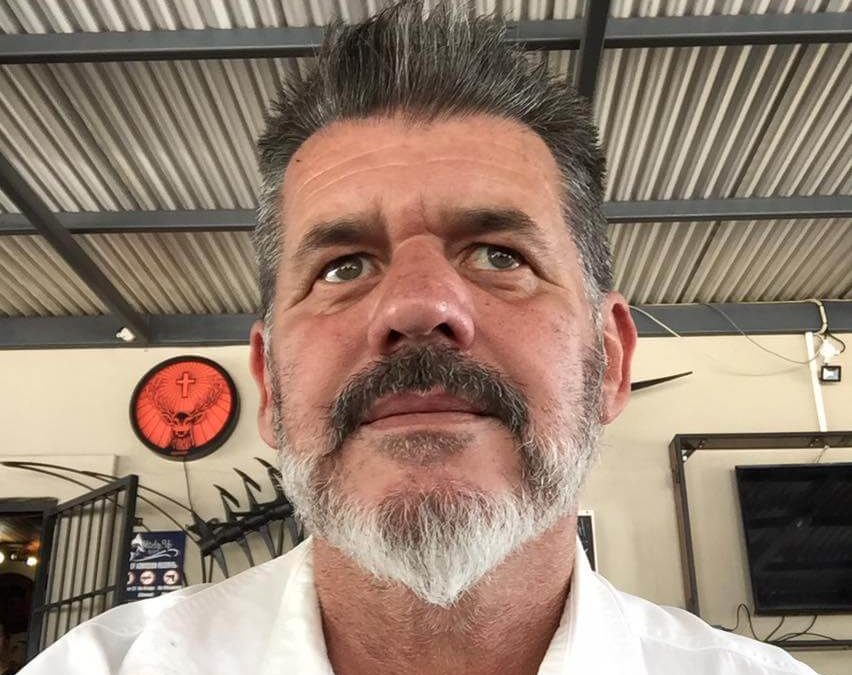 In this technical article, macadamia expert, Kobus van Niekerk outlines how before a tree is topped it should be planted and well established in the orchard to prevent structural weaknesses once it matures and starts to yield.

Many nurseries “top” trees but I have yet to get a clear reason or explanation as to why it needs to be done other than to prevent the young trees from getting too tall because they become too difficult to transport.

For the sake of easy handling and for deliveries to customers this may make sense, and it is true that some cultivars do get quite tall after just two growth flushes above where the graft comes out of the scion. 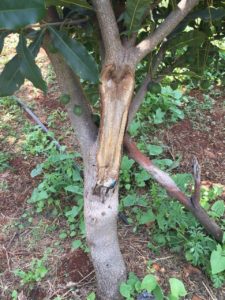 A side branch is torn from a tree where no shoulder or side base was trained to develop.

But when trees are topped by the nurseries, care should be taken to follow up with the correct training and manipulation to make sure there is no threat to the strength of the tree later on.

I prefer that topping be done when the trees are planted in the orchard and well-established, particularly when a healthy vegetative flush indicates that the trees are established and a root flush has occurred.

At this point, and with no side branches developed, all the trees can be topped at a height of about 600mm to 700mm above the level of the ground. No more than 25% of the leaves should be removed.

Even if the trees are much taller than the 600mm, say they are at 800mm or in some cultivars they might be taller at 1 800mm, if there are no side shoots (which are the future branches), the trees can be topped back to the desired height.

This is one of the very few occasions where I would recommend such a drastic cut to the trees.

In the first example the tree was topped while it was still in the nursery or soon after it was planted in the orchard. The three shoots which developed from the primary buds on the topmost node were left to grow without training.

As a result the narrow angles between the shoots did not allow for the development of a branch base or allow for the proper shoulder attachment to each other. 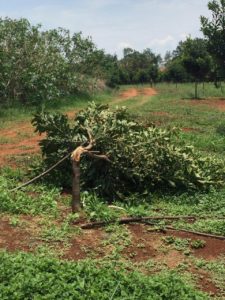 Failure to apply proven techniques at the time this tree was planted resulted in the loss of a four-year investment in water, fertilisers and maintenance.

The lack of a secure base for the shoots is pronounced because a growth leader was not selected when the tree was still young.

All three side branches grew simultaneously and vigorously resulting in a lack of lignification or put simply, wood growing in each branch base or shoulder, resulting in the bark and non-binding bark being caught and squeezed between the rapidly thickening branches.

It is very clear that without lignin (wood) fibre tissue growing inside a branch base or shoulder, a poor attachment developed.

In such cases branch breakages are inevitable.

While such a break might happen early on in the tree’s lifespan resulting in limited vegetative growth loss, if the break happens when the tree is much older it can result in increasing degrees of damage and loss.

It is not a case of if the branch base will break if it is insufficiently developed and untrained but rather, when it will break.

Whether it is at three, five or 15 years, any force exceeding the strength  developed within the side branch attachment at its base or shoulder means that branch will eventually give way, snap, break or tear.

If the branches had been properly trained, the degree of the breakage would have been equal to the amount of attention given to training and manipulation when the tree was still young.

Breakages of this nature can be caused by many factors, and if the orchard is subjected to high winds or other external factors, they heighten the probability of attachment failure.

Also as trees grow, the weight on an individual branch increases creating further pressure on the weak base or shoulder joins.

The weight of the developing crop after nut set adds further pressure, and in most cases breakages don’t happen at the first nut set, but rather later on, and the older the tree is the more severe the breakages tend to be.

The incurred losses from breakages include:

Also the breakages result in a loss of growth time and the adjustment of inputs such as fertiliser and water to prevent over application to a tree that suddenly requires 45% to 85% less feeding and watering than the rest of the orchard.  Maintaining full input levels to damaged trees can result in secondary repercussions, such as fertiliser burn, over irrigating and the possible introduction of root diseases and pathogens.

As shown in the third example a lack of proper training and manipulation of a tree in its formative stages can result in the loss of an entire tree.

That means the time and money spent on the tree have effectively been flushed down the drain.

Proper training following the correct principles and techniques will prevent losses in the future of a newly established orchard.

During storms and floods it is not possible to prevent all tree damage, but with the timely application and intervention, potential breakages and damage to an orchard development can be prevented way in advance. 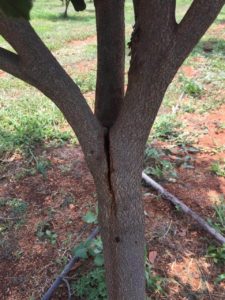 Side branches developed from an untrained node after planting

In effect the work done in a macadamia orchard over the first 18 to 24 months of its development equals an investment with a lifespan of 35 years or more.

He can be contacted on his email at kobusvn@rocketmail.com