Macadamia production is growing in the Southern Cape 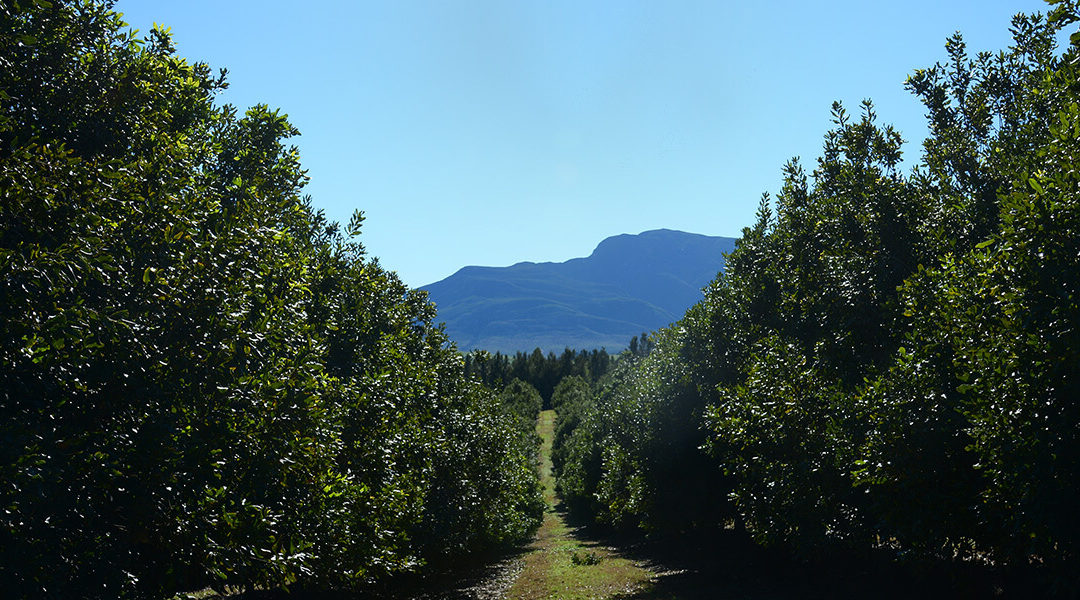 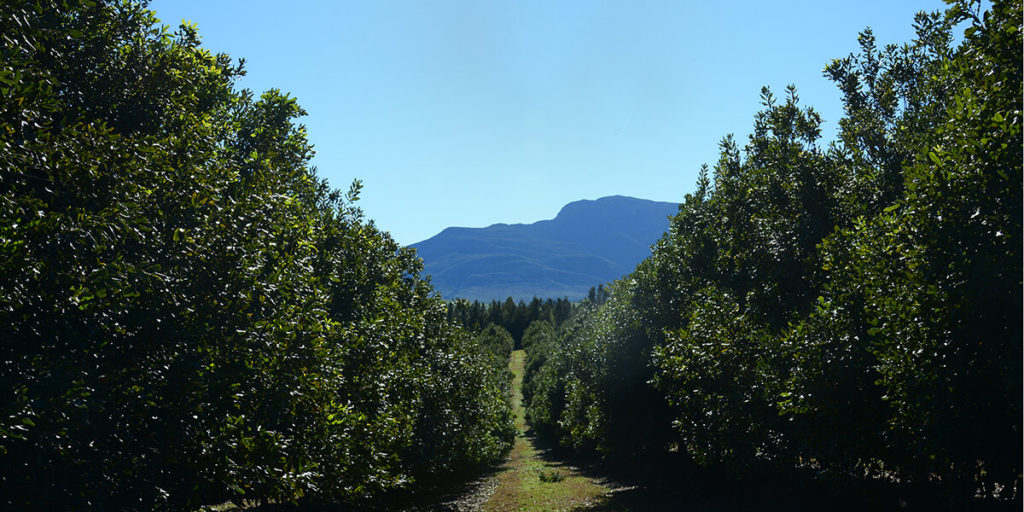 A macadamia orchard near Groot Brakrivier, with the Outeniqua Mountains in the background.

A former Limpopo farmer who moved to the Western Cape after the settlement of a land claim on his property in 2000 has set the pace for macadamia crop growth in the most southerly region of South Africa.

While KwaZulu-Natal and Mpumalanga are better known for their macadamia orchards, Hardus Knoetze and his wife Annelie stuck to what they knew when they bought the farm Geluksdal in the Groot Brakrivier region in 2003.

Having farmed in the Levubu area in Limpopo province, the couple was familiar with macadamia cultivation, but a visit to Hawaii convinced them the crop would do well in the Cape as the climatic conditions in the two areas are so similar.

The Groot Brakrivier region, which stretches from Port Elizabeth in the east to Cape Town and beyond in the west, is completely new to macadamia production. More than 317ha were planted up by the end of 2018 and about 106ha of that planted in 2018 alone.

The Knoetzes started their plantings in 2006 and were the very first to set up a commercial plantation so far south.

“The Southern Cape is a completely new production area for macadamias and because of that, we had to do a lot of research,” Knoetze said.

“In Limpopo, anything grows, while here the young trees need constant attention. We don’t have proven results for aspects such as cultivar performance, fertilisation norms and phenological periods. At the moment we are adapting the successful practices used in other production areas.” 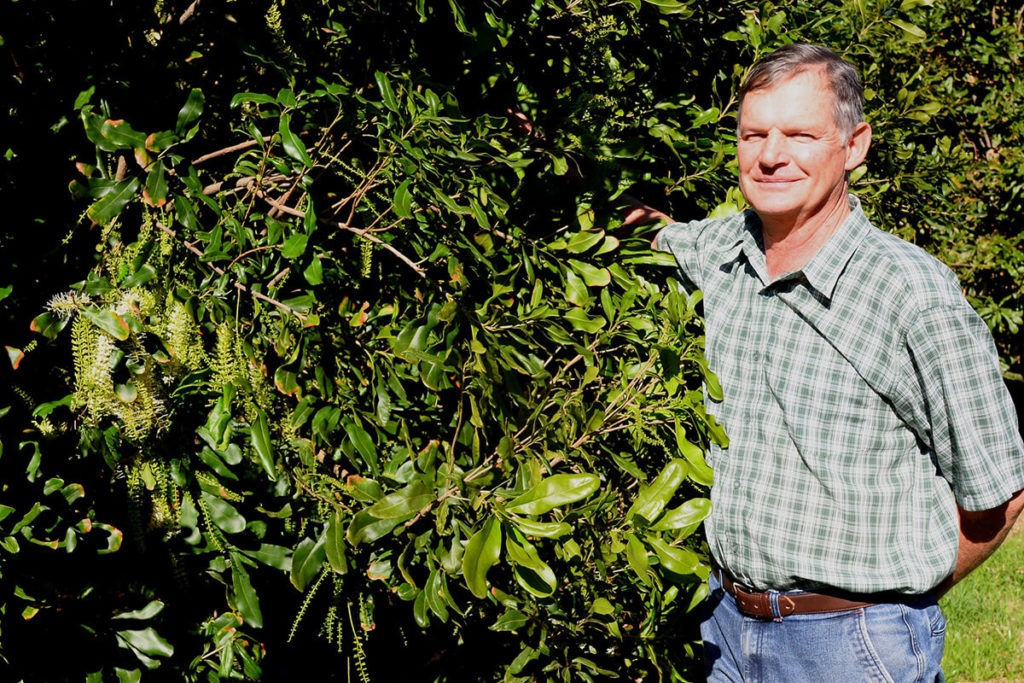 Hardus Knoetze, the first farmer who planted macadamias commercially in the Southern Cape.

As a result, a great deal of groundwork and soil preparation was necessary before the Geluksdal trees were planted.

“We are very fortunate to have good, deep soil, but it was impoverished and compacted. We had to apply lots of lime, phosphates and gypsum. Analysis-based pH and phosphate corrections were also made,” he said.

The best soils in the Cape are gray sandy and sandy loam soils mixed with clay or shale, which are known to release salts.

Hawaiian cultivars such as 814, 788, 816 and 849, perform well, yielding similar tonnages to those grown in other regions, but the sought-after Beaumont does not do well.

“The Southern Cape has a moderate climate, which is ideal for macadamia production,” added Knoetze.

“We do not experience constant high temperatures. In normal years, the temperature exceeds 30oC  for only a few days. One of the challenges, though, is that the winters start only in August, resulting in soil temperatures remaining low until October. This is when the nuts grow, so it shortens the season for nut development considerably, and often prevents the nuts from becoming large enough.”

And while the wind is not stronger than that in Levubu, the constant southeasterly has meant shade net protection is essential for the first two years after the saplings are planted. 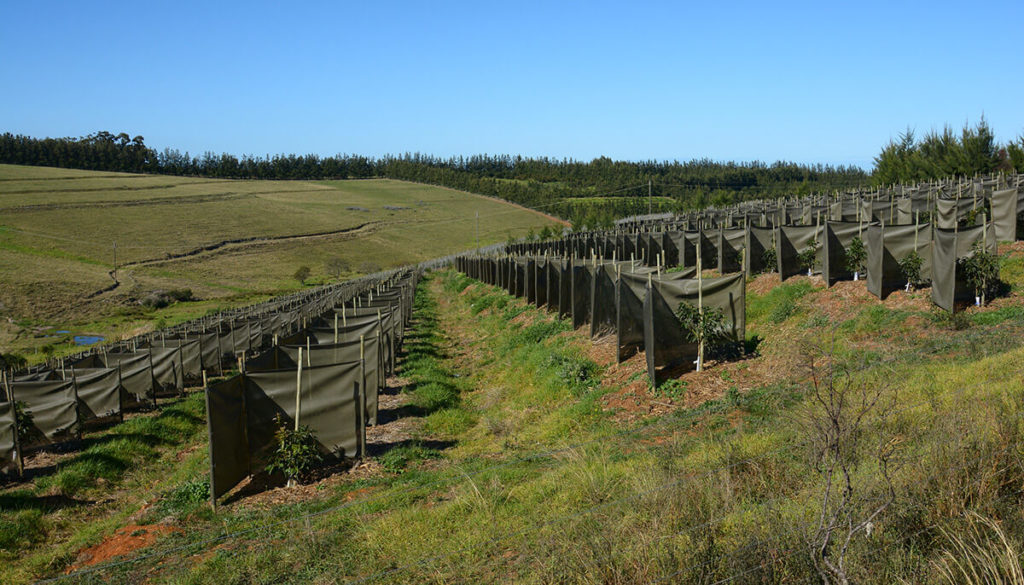 Young trees must be protected against the regular south-easterly wind if they are to thrive.

The moderate climate and cooler soils dictate fertilisation as follows:

The climate and soil types, however, have little effect on the growth of the trees as by the age of 15 years, they are similar in size to those in Levubu.

Yields are in line with the national average of three to four tons dry nut-in-shell per hectare. Nuts are dried on farm and transported to processors in KwaZulu-Natal and Nelspruit.

“The transport costs for 30-ton loads remain lower than what it would cost to build a processing plant here,” Knoetze said.