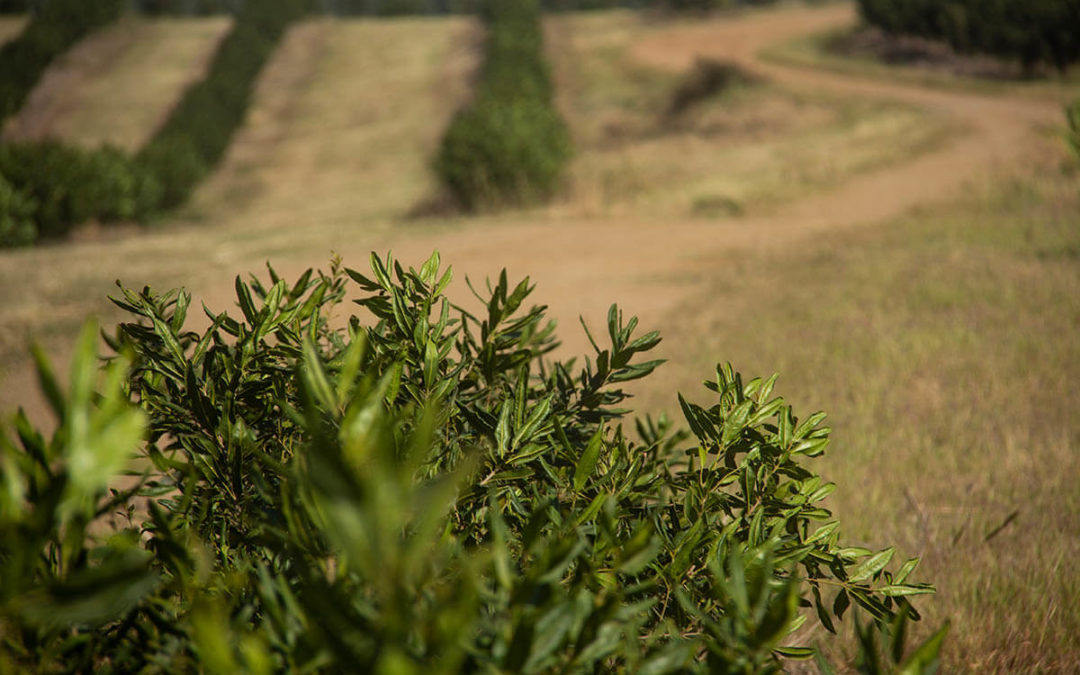 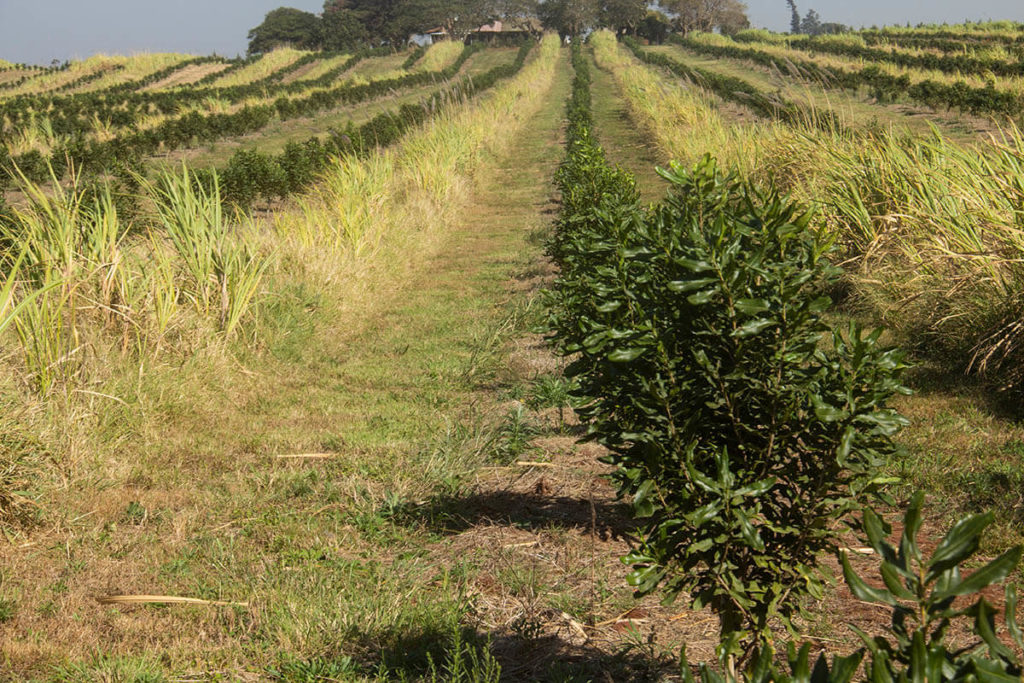 Newly planted macadamia trees, which are being protected from the wind by rows of the old sugarcane crop.

At the height of one of the worst droughts in living memory and with the once rich and fertile soils devoid of life, a Zululand farmer set about planting macadamia orchards in old sugarcane fields near Richards Bay with just one thing on his mind, healthy vibrant soil.

Looking for signs of life in the deep soil as the clods folded outwards and away from the shank of the winged-tine ripper, Zululand farmer William Davidson says he found none, not an earthworm, a spider, nor even an everyday termite.

The soils were as hard as concrete and just as dead.

Six months later, however, as Davidson dug under the deep compost and turned a clod for closer inspection, tiny earthworms and their eggs were everywhere. What had been devoid of life for nearly a century was now miraculously alive and filled with crawlies of all shapes and sizes. 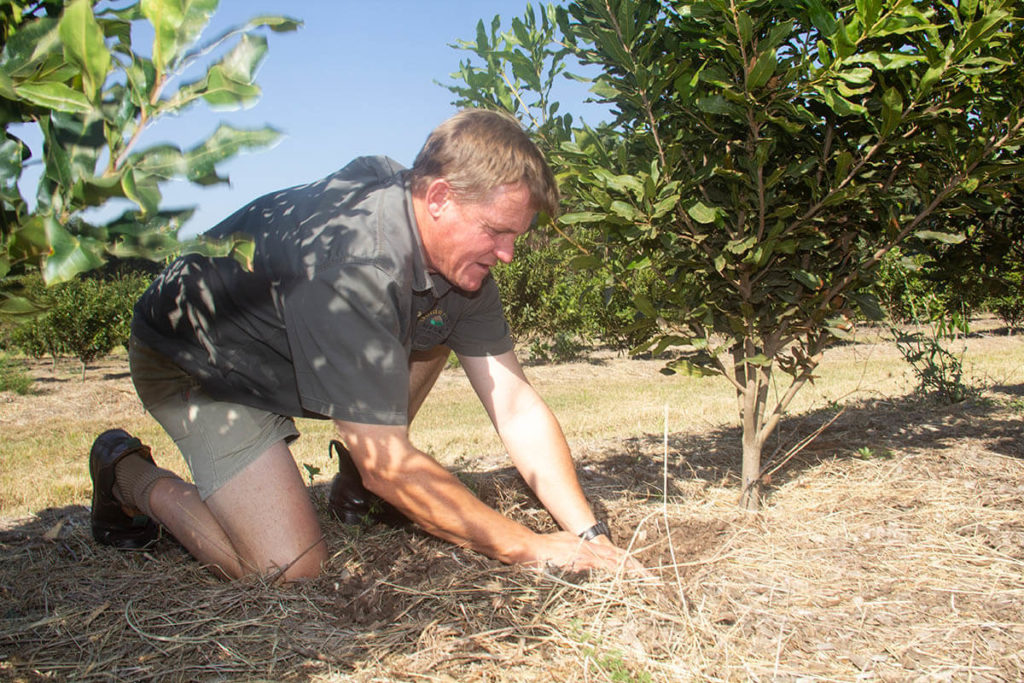 Davidson and a consortium of investors bought a century-old sugarcane farm overlooking Richards Bay – KwaZulu-Natal’s northernmost industrial city –in an area better known as the “Golden Mile” because of its reputation for rich and fertile soils.

The sale went through in February 2017, but in October 2016, Davidson was already busy in the derelict and neglected fields, mowing down the rows of cane to create wind breaks and ripping up the once fertile soils in preparation for the introduction of macadamia trees.

“I knew the soils were really, really good. I was also aware that the 157ha farm had relentlessly produced up to 10 000 tons of sugarcane in a good season year in and year out. I also knew the soils would need to be rejuvenated, but I definitely wasn’t prepared for what I saw that day. I walked behind the bulldozer and the ripper for hours searching for earthworms or any sign of life in the soil, but there was none.” 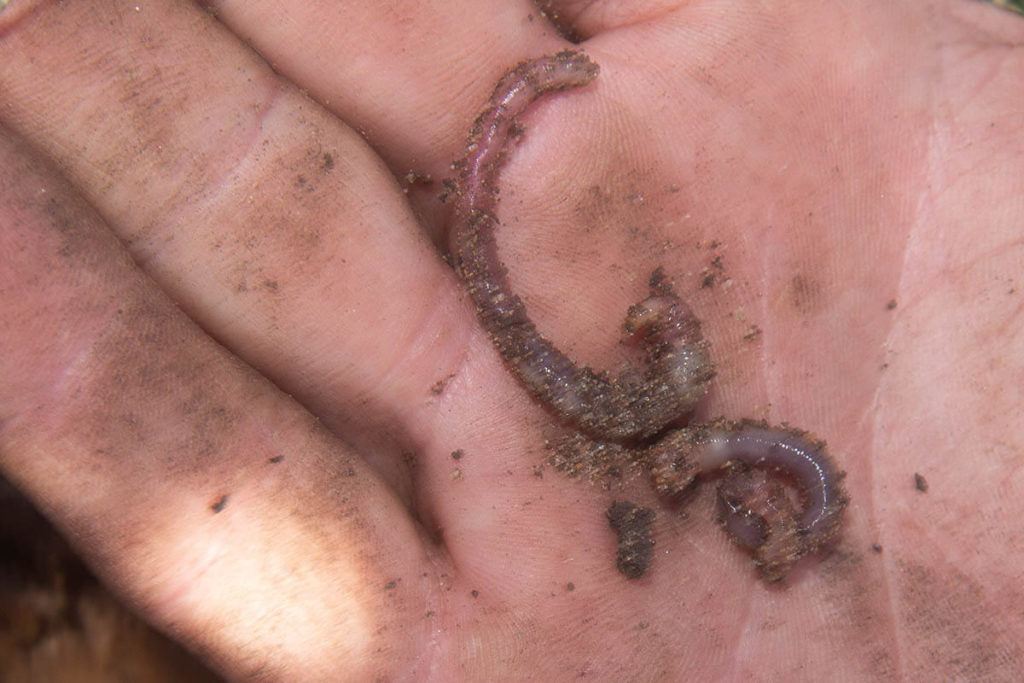 With a farm of his own on the banks of Lake Teza near Mtubatuba, Davidson began rejuvenating the old and compacted sugarcane fields. Today, just two years on, 134ha are under macs, with the remainder expected to be planted up by the end of the year.

“After ripping the soils to break up the clods we corrected the soil pH by applying lime and gypsum and then started applying the organic matter,” he said.

And herein lies one of the most important ingredients for the health of his trees.

“We managed to secure a supply of waste wood from various processing plants in the area and had it dumped here on the farm. As we mowed the sugarcane, we added it to the woodchips. We bought a side discharge mower that adds the cut grass to the mulch under we have already spread under the young trees.” 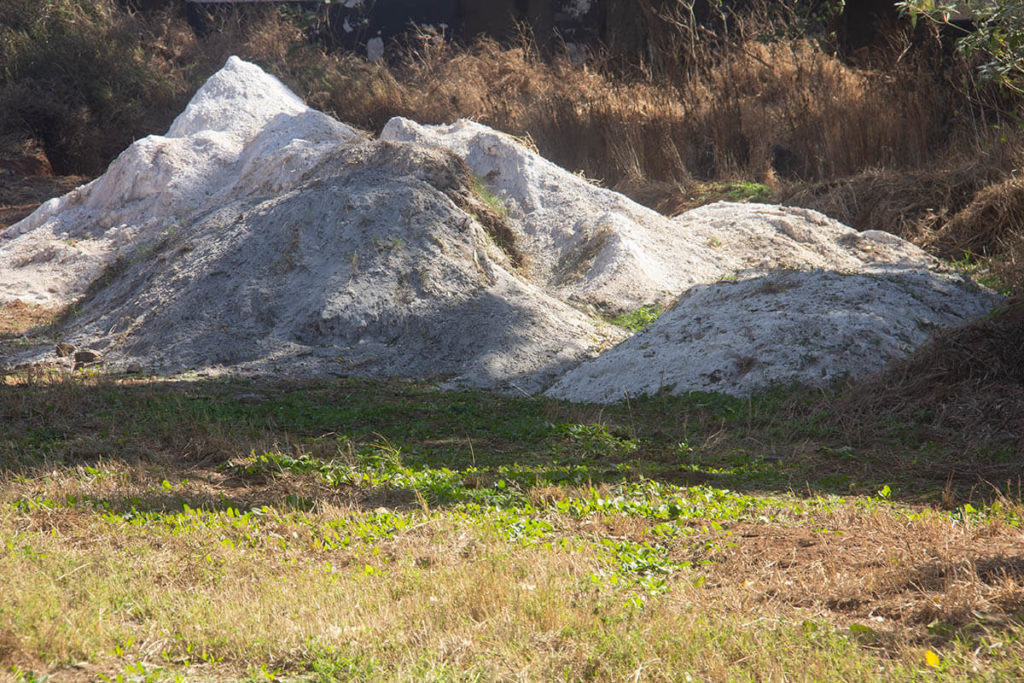 Lime and gypsum were also applied to correct the pH balance of the soils.

Before any trees were planted, the soils were mapped, with the best areas identified for planting first. Tillage was based on the soil types and carried out on the contour. Ridging was only done where the soil indicated it was necessary.

“We also matched the tree varieties to the soil types. In 2016 we planted mainly Beaumonts because they are precocious and that would help our cashflow into the future; in 2017 with the appointment of James Braithwate as our full-time manager we planted up 60ha to 842, 814, 816, A4 and A16. In 2018 we planted up 40ha to 788, N2, 849 and 791. In the more sheltered areas, we planted 816 because they really don’t like the wind, and that is one of the challenges we have here: the wind blows relentlessly. Where the land wasn’t flat we planted on contours where drainage took precedence in the design of the contours over tillage direction. For example, on the flat areas the rows run north to south, but not in the contours, here the rows follow the shape of the land and can run in any direction.

With two existing dams on the farm, button drip irrigation was installed with an application of 5.4 litres-an-hour per tree. However, micro-jet irrigation systems are under discussion for the future, Davidson said. 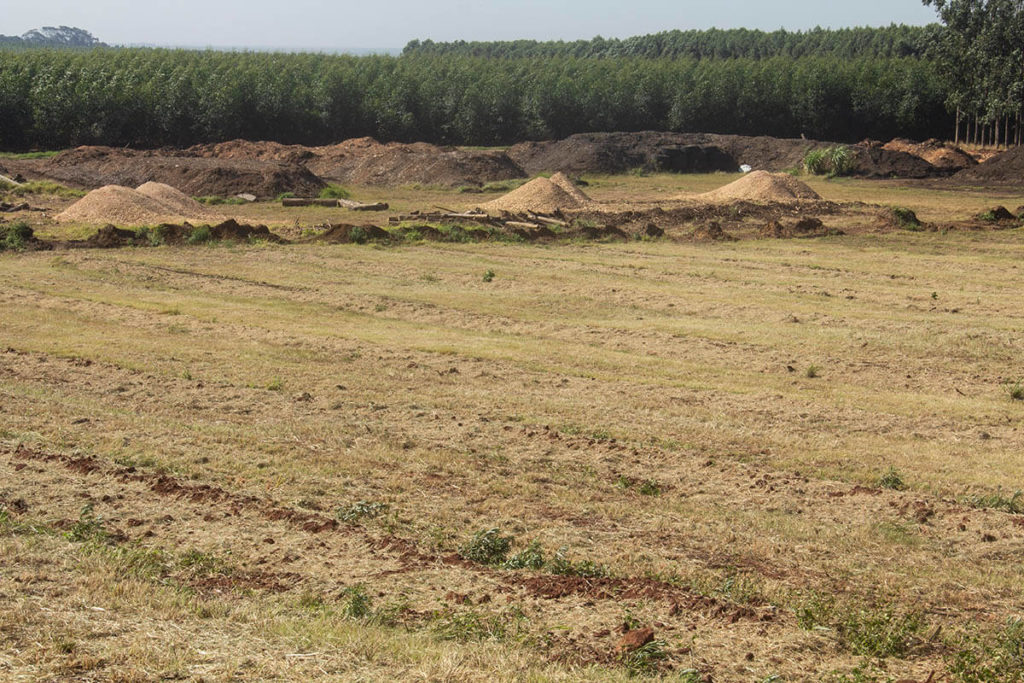 Piles of sawdust and woodchips at Golden Mile Macadamias.

Driving through the vast orchards, manager and co-shareholder James Braithwaite pointed out the windbreaks planted to casuarina, Napier fodder and then the old sugarcane.

“Our motto here is happy soils mean a happy life! We have very little need for pest control other than spot spraying, because we have a healthy population of the good insects, for example, ladybirds and praying mantis. And because of the heavy mulch, we only have to do a little spot spraying for weed control and we use as little Round-up on the farm as possible. Our fields are now alive,” Braithwaite said.

Butch Aylward, who is the technical advisor for the Green Farms Nut Company in KwaZulu-Natal, said the Golden Mile Macadamia operation was an excellent example of how to “do things right”. 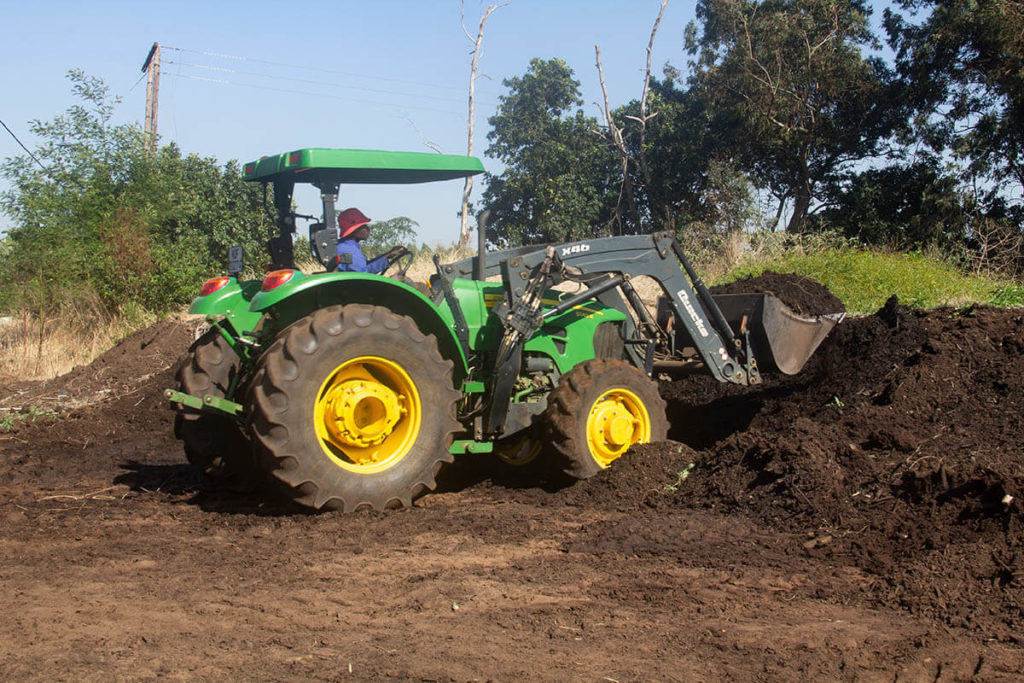 “The planning and preparation done here has made all the difference. The health of the soils and trees is testament to that, as is the efficiency of the management and maintenance of the orchards post-planting,” he said.

Interestingly, according to Davidson the first macadamia trees were planted in the district between 1948 and 1950 and then again in 1972.

“Back then the trees were planted from seed and delivered to a factory in White River by train in old potato or fertiliser bags. The guys used to dry the nuts by hanging them in orange bags from the rafters in their sheds with a fan trained on them. De-husking was done by hand. There was also no understanding of how to prune the trees then either. I found a payment slip the other day showing that farmers were paid R6-a-kg nut-in-shell in 2008. Today, growers can average between R60 and R90-a-kg nut-in-shell.” 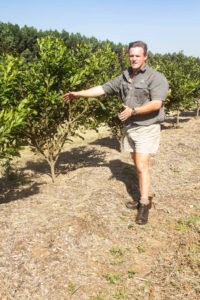 James Braithwaite shows the width of the organic mulch piled up under the trees. 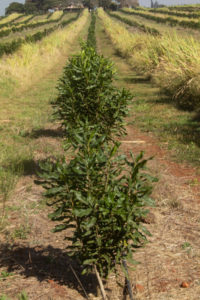 Newly planted macadamia trees, which are being protected from the wind by rows of the old sugarcane crop. 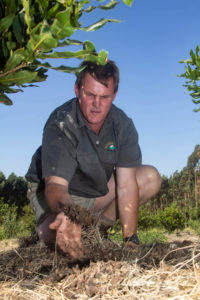 Golden Mile Macadamia manager and co-shareholder James Braithwaite shows the depth of the mulch under the trees.