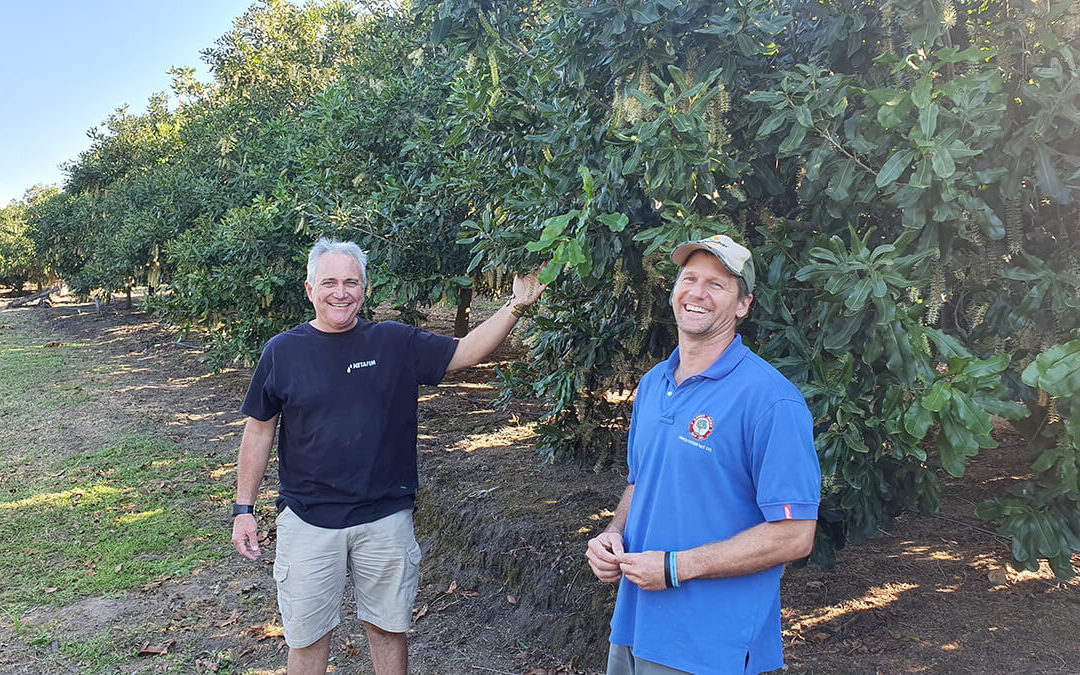 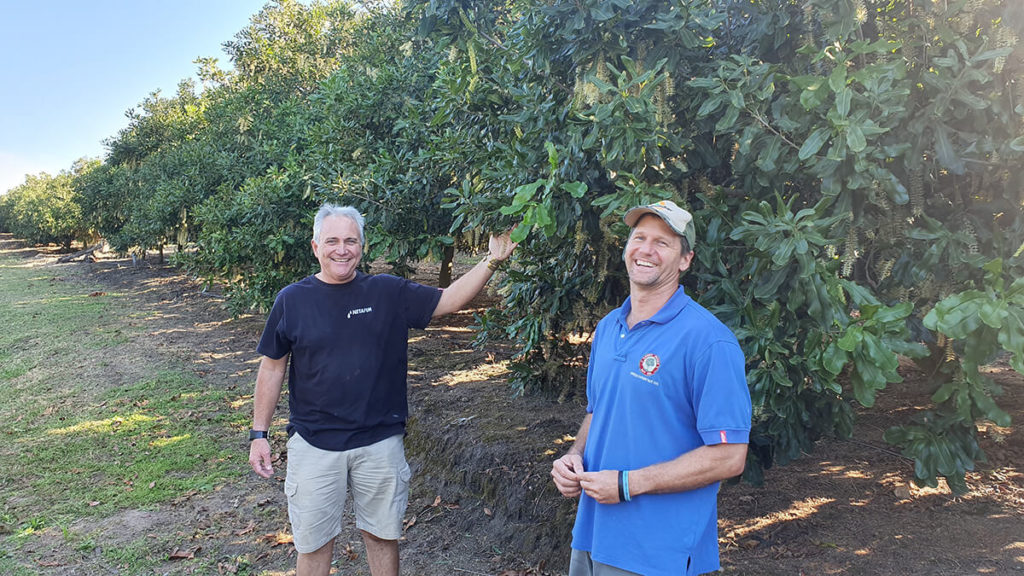 New developments in irrigation technology have opened a world of possibilities for the macadamia nut industry. As farmers find that less is more when it comes to water flow, quality and yields are improving.

The Dovetons have been on the family farm in Port Shepstone, KwaZulu-Natal, for more than 30 years. “We produced sugarcane and later moved into bananas. We then discovered Panama disease in our banana plantations. This, combined with the realisation that we had to move to a more productive crop, compelled us to switch to macadamia production,” Doveton said.

They planted their first macadamia trees in 1999 and later realised they needed a proper irrigation system to realise the full potential of this lucrative crop, he added. “We were advised to consider low-flow drip irrigation and honestly, it was blind faith. I did not know the system and had no idea what the outcome would be. We decided to go with it anyway, although it had never been done in our area. It was a risk, but it has paid off, without a doubt.”

Advantages of this form of irrigation include better depth management, improved water distribution, the possibility of longer irrigation periods, higher performance from poor soil areas, simultaneous irrigation of larger areas, a resulting better soil-water-air ratio and the prevention of fertiliser leeching. This makes it more accurate and efficient than other irrigation systems.

Doveton said the biggest challenge was to get his mind around the low-flow way of thinking.

“Ideally, you would start from scratch and plan out the entire farm according to soil types and other aspects. This would allow you to divide the farm into irrigation blocks. However, it is never too late to install a low-flow drip irrigation system, so we ended up installing it into existing and differing orchards. This posed quite a challenge. We had varying tree ages and had to plan out blocks according to tree age, topography, variety and more.”

During the planning phase, Doveton considered the future of each tree. “There were quite a few blocks where I felt that the trees needed to go, that we had to cut our losses and start anew. However, our consultant, Gerhard Mostert from AgriWiz who assisted with the installation process, encouraged me to let the system do its job and wait to see what the right move would be. It was worth the wait as many of these trees are now delivering good and consistent results.”

Doveton said it is still early days, but that the impact on yields and crop quality looks very promising. “We have now been using low-flow drip irrigation for two to three years. Many of the young trees are going into their first production season, so we are excited to see the results. Although I cannot credit it to the irrigation system alone, we have seen a 35% yield increase from the previous to the latest crop.”

He added that the greatest impact to date was that trees are flowering and entering production much sooner. “Isn’t that what it is all about? We spend a lot of money – earlier and higher returns on investment are exactly what our bottom line wants. Low-flow drip irrigation allows you to push the tree harder, and it produces accordingly.”

Doveton and his team can now irrigate the entire farm at once and the orchards are irrigated 365 days a year. Irrigation during rainfall is known as a technical irrigation, a very short irrigation done with the sole purpose of applying fertiliser. 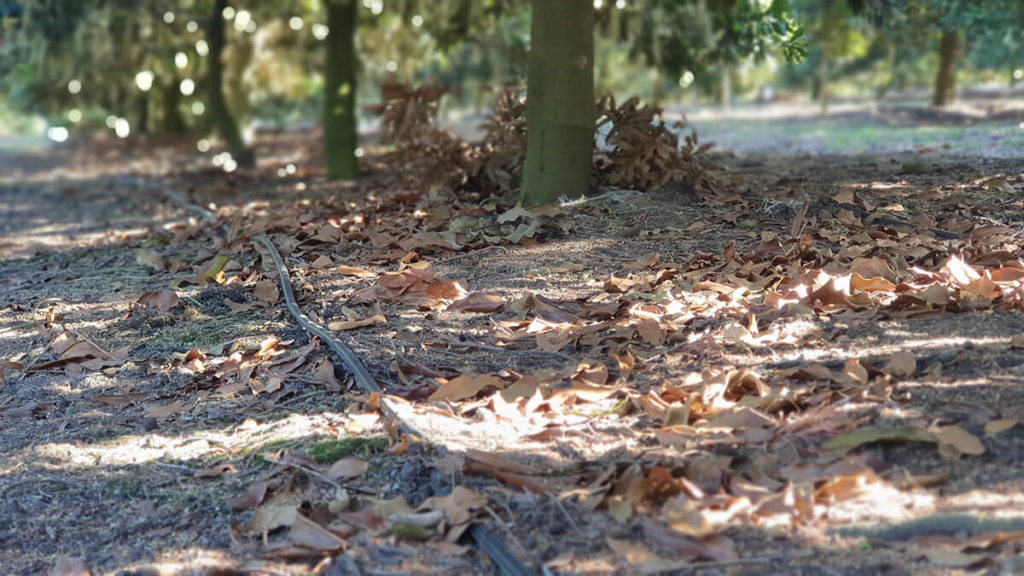 Drip irrigation in a macadamia orchard.

The benefits of the system have extended to the farm’s fertiliser programme. “We used to fertilise the trees four to six times a year. We are now doing it 365 days a year with small amounts of fertiliser through the Netafim Nutrigation system. Instead of the tree drawing its energy directly from nutrients inherent in the soil, you have an open hydroponics system on your farm where the nutrients can be applied daily on demand, just as the water is applied daily on demand.

“This has been a game changer as the trees have responded well. The young trees are producing earlier, the older trees are recovering and coming back into high production. We have total control over how much fertiliser we apply, how often, where and when we apply it and how deep we apply it.”

Another great advantage is that a breakdown in one block does not affect water and nutrient delivery to other blocks on the farm. It is also advantageous that the entire cycle takes place in 24 hours. “This means that tomorrow is a new day and any mistakes made can be rectified.”

Doveton admits that taking on the low-flow challenge is overwhelming as it requires significant investment. “You must also do the necessary maths to make sure you are doing it right, and the system must be meticulously managed and maintained. The resulting control is no doubt worth all of this. I must stress that it is important to work with someone who has a passion for low-flow drip irrigation and that you make the commitment to managing and maintaining the system on the level it requires. Otherwise it will not work.

“Without monitoring, all irrigation planning and management is mere guesswork. We are now doing proactive irrigation scheduling using the AgriWiz platform, which takes the evapotranspiration for the area for the period in question into account. With the combination of the versatility of the irrigation system, the scheduling programme, the soil moisture probes and soil solution EC value monitoring, we believe we can strive for even better results.”