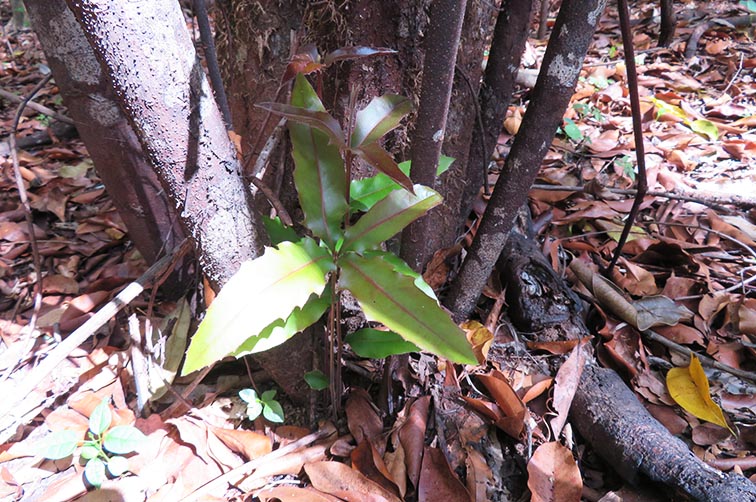 A group of dedicated enthusiasts braved the fire ravaged landscape in central Queensland’s remote Bulburin rainforest on April 14 for the first time since the disaster to see how Macadamia jansenii, a species as rare as the country’s Wollemi Pine, had fared.

Field naturalist and retired sugarcane farmer, Keith Sarnadsky who was a member of the team allowed to inspect the fire damage for the first time after roads into the park were cleared of fallen trees said almost all of the small Mj trees touched by fire appeared to be dead.

“Some of the larger plants may have died due to their own stump burning, but some now have suckers appearing. Most of the dead plants didn’t appear to have had extremely hot fire around them,” Sarnadsky said.
The discovery of about 150 trees in 2018 had trebled the known population of Macadamia jansenii, or the “Mj”, a species first recognised by the modern scientific community in 1992. Sarnadsky who found the new trees over several expeditions in the spring of 2018, was also on the 1983 expedition when cane farmer Ray Jansen initially discovered the Macadamia jansenii species, the first new macadamia in 120 years.

Denise Bond, executive officer of MCT, said until FAME (the Foundation for Australia’s Most Endangered Species) funded any further searches for Macadamia jansenii in 2018, it was not even known that the new trees existed.
“We were thrilled when Keith discovered these new trees to add to the tiny original population of 60 individuals, but that same year wildfire came within 10km of the habitat, and now our fears have been realised with the December 2019 fires burning at least a third of the new trees,” Bond said.
“We hoped they were safe, nestled in sub-tropical rainforest, but we have been proved wrong. Luckily, we have a small but dedicated team of traditional owners, the Gidarjil Rangers, amateur and professional botanists, researchers and park rangers who are passionate about protecting this endangered macadamia and the subtropical rainforest that sustains it. We’re applying for funding to increase fire and weed management across the Bulburin landscape.”
Ian McConachie, an MCT founding member, said as the Mj grows in an area that is much hotter than the commercial macadamias, it is likely to have genes that will be used in the future to mitigate the effects of global warming.
Leaf samples taken from the newly discovered Mj are currently being analysed to see how the genetic diversity of the population is distributed across its habitat. The 43 original trees have meanwhile been cloned, with new trees being grown in botanic gardens across Australia as part of an “insurance population”.
MCT aims to learn more about the ecology and genetics of Macadamia jansenii and preserve its genetic diversity in ex-situ plantings as well as increasing the range of its current habitat, particularly in anticipation of the impacts of climate change.
The Australian non-profit is the world’s only charity devoted to conserving macadamias.