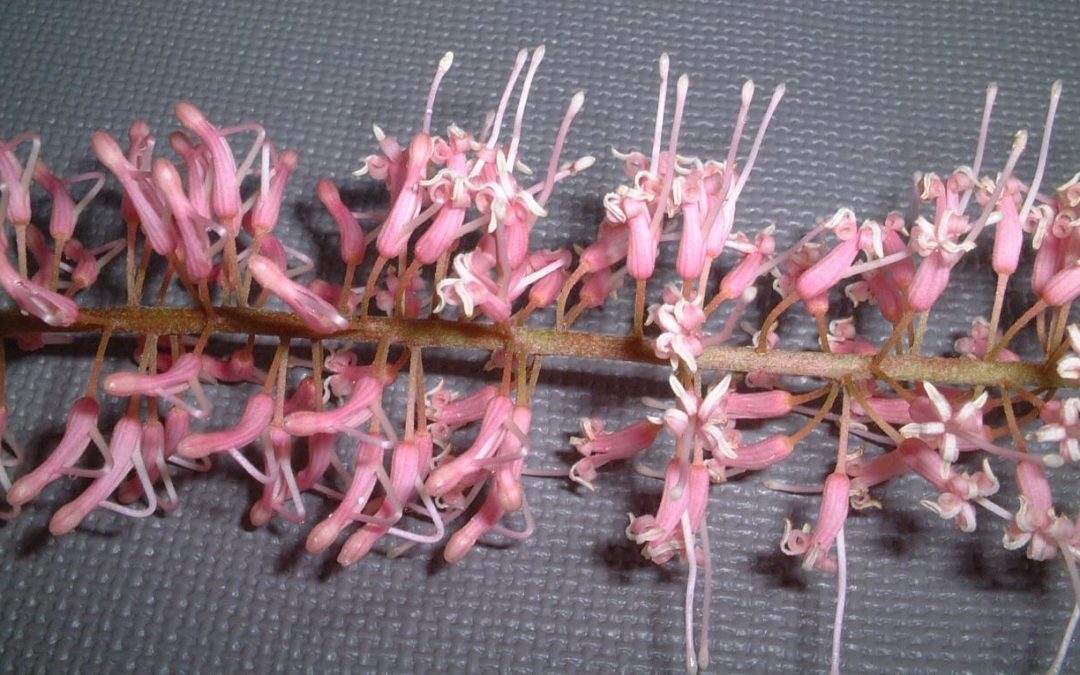 While autumn is still in the air, macadamia expert and consultant Kobus van Niekerk thinks of spring as he explains the intricacy and complexity of the flowering process, which ultimately leads to a successful nut yield come the annual harvest.

Cytokinins, iron, zinc, calcium, potash and boron are essential nutrients for abundant macadamia flower growth and development, pollination, fertilisation, and cell division, which means the appropriate nutrition additions must be done by at least the end of May or the first two weeks in August to ensure a full flush by spring.

In spring, macadamia trees of different varieties all start to come into flower, and regardless of seasonal wind during the period, proper nutrition applied to the trees now will ultimately translate into a successful yield in the season ahead.

Flowers are borne on long, narrow inflorescences called racemes, which emerge from the axils of leaves as seen in pictures 1 and 2. The raceme is pendant in shape, i.e. hanging, ranges in length from 100mm to 500mm, and bears 100 to 800 flowers.

Flowers are up to 12mm long (at anthesis) and are borne in pairs, or groups of three or four, on pedicels of 3mm to 4mm long in the axils of minute bracts, which are arranged at regular intervals along the rachis of the raceme.

The flowers are perfect, they have all sexual parts, but are incomplete, which means instead of petals they produce four petaloid sepals. These form the perianth tube and appear as four narrow yellow lobes. These lobes roll back as the flower expands.

Within the perianth, in the centre of flower, is the pistil (female organ of the flower: stigma, style and ovary). The ovary and the lower part of the style are densely pubescent (hairy), while the upper part of the style is glabrous (hairless). The ovary is egg shaped and tapers into the slender club shaped style, which becomes thicker towards the apex where it becomes the stigma. Four perigynous (arising beside the ovary) stallions, each with two anther sacs about 2mm long, adhere about two-thirds of the way up the floral tube by short filaments to the petal-like sepals. 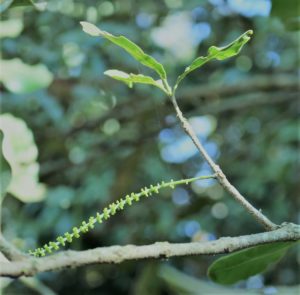 Six to seven days before flowering, the style begins to bend.

As in pictures 3 and 4, after about three days the lengthening stamens bend through the abaxial suture between two sepals.

At the same time, the bud changes from green to creamy white (or pink on hybrids and Tetraphylla).

One to two days after this, the anthers begin to discharge pollen on to the style. This is a self-pollination mechanism. But macadamias are in fact highly protandric, that is, the pollen is ripe before the stamen is ready for pollen germination. This necessitates the use of cross pollinator cultivar pairs and very importantly, bees. 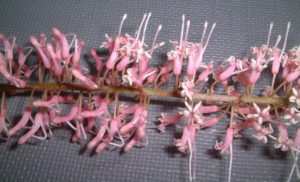 3. Flowers open from the apical end of the raceme.

The growth pressure of the elongating style further expands the gap in the sepal suture. About one to two hours before anthesis, the sepals begin to separate at the tip and curl back, uncovering the anthers, which are curled over the tip of the style. Once the sepals are completely recurved, separation of the anthers from the style commences, leaving four pollen clumps on the tip as in pictures 5 and 6.

Within a couple of minutes they pull completely clear of the style and within 10 minutes the style will break through the last unopened portion of the suture before springing free. Anthesis (flowering time from opening of the flower until withering) is at its peak from August to September.

Flowering is usually basipetal or develops from the top of the raceme moving downwards, but it can also be acropetal, that is, starting from the bottom of the raceme and moving upwards. The flowering period of a single raceme ranges from one to five days. 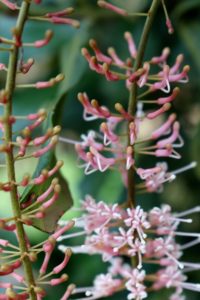 A single flower can produce more than 14 000 grains of pollen.

Ten to 15 days after anthesis, the majority of flowers would have fallen to the ground. These flowers bear germinated pollen grains on the stigma, but have unfertilised ovaries.

The remainder of the flowers still on the raceme are mostly fertilised and represent the “initial set”.

After anthesis is completed an exponential burst in growth is noticeable for  about four to seven weeks (October to November).

Up until 60 days after anthesis, young fruit will drop continuously, with the remaining fruit fairly well attached due to the thickening and lignification of the rachis. The drop of young fruit is greater on racemes with a high initial set than on racemes with a low initial set. It has being suggested the cause of this young fruit drop may be as a result of competition between individual nuts for food, water and mineral nutrients.

Depending on the nut set, the rachis becomes thicker in relation to the size of the cluster of nuts on the rachis.

Only about 0.0004 % of flowers develop harvestable nuts. The mature fruit is a follicle 25mm in diameter, green in colour and globose in shape. 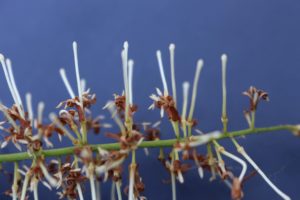 The seed is in fact the nut covered with a 2mm to 5mm thick, hard testa (outer seed coat) and the embryo or kernel. The embryo consists of two large hemispherical cotyledons and minute, nearly globose, plumule-radicle axis, inserted between the cotyledons at the lower end of the seed.

After one ovule has been fertilised, it appears the fertilisation of the second cynic in the ovary is inhibited. Hardening of the shell takes place about 110 days after anthesis, and the fruit is about 70% of its final fresh weight.

Very little oil formation and only slight enlargement of the embryo, mainly due to water accumulation, takes place during the first 90 days. After that the dry weight represented mainly by oil increases constantly, with about 70% of the oil being formed between 90 and 185 days of its development. This oil accumulation stage is critical for kernel quality and the climatic conditions during oil accumulation are vital in oil content, sound kernel recovery, and percentage of first-grade kernels.