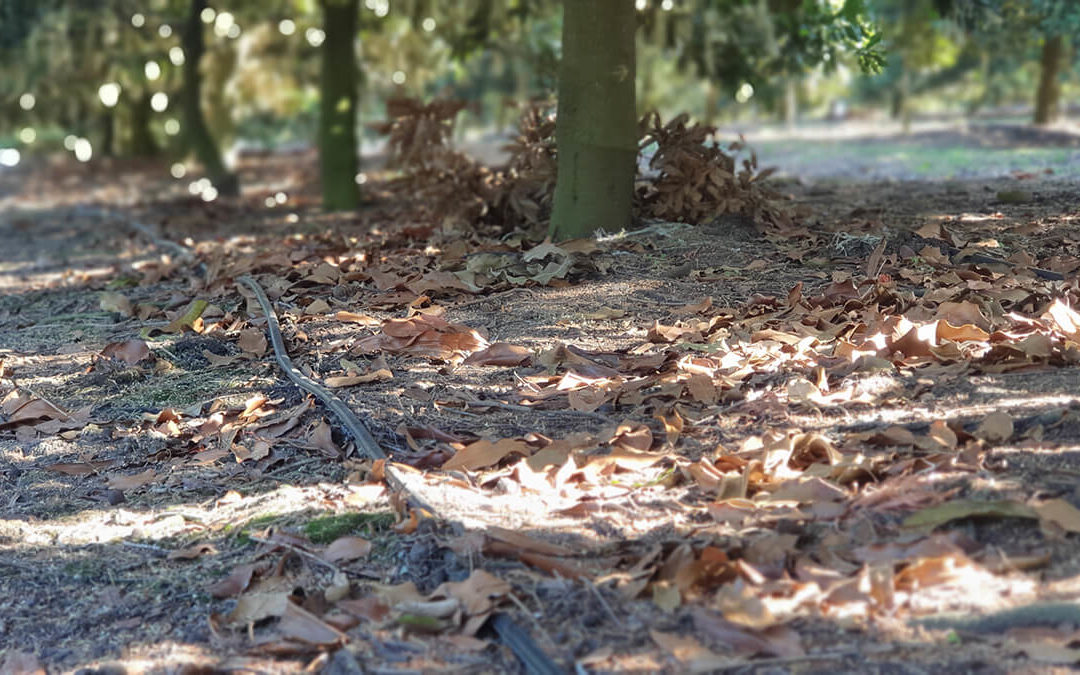 Expert and industry consultant Philip Lee delves deeper into the irrigation question, with an emphasis on efficiency and the importance of accurate, research-based water allocations.

This was the very question I asked macadamia farmers in Levubu in the early 1990s, where I was working for a company establishing the largest area (415 hectares) of macadamia orchards in South Africa, many of which were irrigated.

The answer I was looking for was: how much more yield do we get from irrigated orchards when compared with dryland (unirrigated) orchards? Nobody at that time could give me the answer. This short article provides the answer to that question while emphasising the importance of the efficiency with which applied irrigation is converted into nut yield. It also brings into question the accuracy of published macadamia water requirements or “allocations”, which are probably driving recent assertions of over-irrigation in the industry.

As no answer was forthcoming from farmers, researchers or even irrigation specialists back in 1990, I set about finding out for myself. There were two commercial blocks at Maclands Estate, Levubu, planted at the same time (1990) at the same spacing (10m by 5m) with the same cultivar (Beaumont 695). One was irrigated, the other not. Figure 1 shows the yields produced over the first seven productive seasons through to end 1999. The irrigated trees produced 64kg Dry-In-Shell (DIS) per tree (12.8 tons DIS per hectare over the seven years), 67% more than the dryland trees, which produced 38kg DIS/tree (7.6 tons DIS per hectare) over the period. 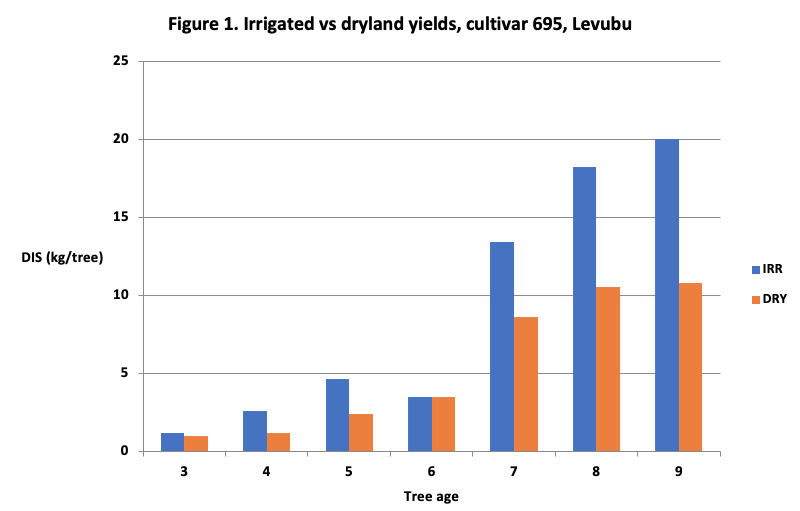 Irrigation was applied using microjets with delivery rate 3.2mm per hour (or 40 litres per hour), which could only operate six hours per week to apply nett 15mm of irrigation per week. Long term average rainfall at Maclands Estate is about 700mm per annum. In the nine years from planting to 1999 (tree age nine), it was never possible to apply more than 18 rounds of irrigation (270mm nett total for the year). At tree age six, when both irrigated and dryland blocks produced the same yield, the wettest season (over 1200mm rainfall) in many years was experienced. Assuming the 18 rounds were applied in tree age nine, it needs 2 700 cubic metres to apply 270mm of water to the full surface of one hectare.

Microjets at Maclands were wetting only 60% of the soil surface, so the total amount of water needed to apply 270mm irrigation in one year was 1 620m³. In that year, the yield benefit from irrigation was 9.2kg DIS/tree (1.84 tons DIS/ha). The yield response to irrigation in that year was therefore 6.8kg DIS per mm irrigation applied, or 1.14kg DIS per cubic metre (1000 litres) water applied.

Not exactly scientific, but the observational data from Maclands Estate (Lee, 1999) after nine years did provide the justification for investing the capital in the irrigation scheme and was able to quantify the benefit of irrigation in terms of both yield and profitability.

In the previous edition of The Macadamia was an article entitled “SA Macs are over irrigated”. That article referred to the irrigation research project that has been funded by the Water Research Council (WRC) and SAMAC since 2016, undertaken by various researchers including Dr Nicolette Taylor. It is unfortunate that without any factual evidence the article asserts that “since farmers were all too aware of the risks of under-irrigating crops and the yield penalty that ensues, the result is a general tendency to over-irrigate”, and further “expansion can’t take place within existing allocations if the whole water allocation is being used for the current area under production”.

It is also unfortunate that despite the fact that this very good research project has been funded for nearly five years, very little information has been published from this work, even just to provide some basic guidelines of how farmers SHOULD be irrigating their macadamia trees. The one article that was published (Smit et al, 2017) does at least support the evidence from the Maclands observation, as Smit et al found that 0.85kg DIS were produced per cubic metre (Maclands 1.14kg DIS per cubic metre) water applied, referred to by Smit et al as the Water Use Efficiency (WUE).

The notion that macadamia farmers generally over-irrigate and that expansion can’t take place within existing allocations is perhaps fuelled by information in various sources, including the SAMAC website, which carries a tabular “Total water requirement per season” based on an allocation of 9 500 cubic metres per hectare per year.

There is neither reason nor explanation of this very large volume of water being required per season, nor reference to any scientific research or literature from whence it may have been extracted, which is almost six times more water than the 1 620m³ used at Maclands Estate to supply 270mm of irrigation to secure 1.84 tons DIS more per hectare than unirrigated trees.

A second source, Nortje, 2013, contains a Table showing water allocations for subtropical crops in Limpopo, where the lowest allocation provides 474mm/annum for microjet and 455mm for drip irrigation in Politsi (near Tzaneen), the highest allocation 834mm/annum for microjet and 815mm/annum for drip irrigation of macadamias in Letsitele. These water allocations were agreed upon after consultations between the Department of Water Affairs, Subtrop officials and irrigation consultants in Limpopo at the time. Again, these amounts are considerably higher than the volumes of water needed for efficient irrigation of macadamias cited in this article.

More than six million macadamia trees have been planted on about 20 000 hectares since the SAMAC/WRC research project began in 2016, more than half of which are under full irrigation. If all of those new macadamia farmers (and maybe even their irrigation engineers/designers) only consulted the published sources mentioned here for information on how much water is required to efficiently irrigate macadamias, one wonders how many macadamia irrigation schemes have been over-designed in Southern Africa.

So, there could be 10 000 hectares with irrigation schemes costing R20 000/ha more than they should – a staggering R200 million – and capable of applying four times as much water, and more than what is required for efficient nut production. If 9 500m³ less 1 620m³ = 7 880m³ is applied per hectare to 10 000 hectares, the total volume of water is 79 million m³ per year, approximately the full capacity of Tzaneen Dam and enough to supply 330 000 average four-person households with water for a year. A lot of water to waste in a water-scarce country!

Figure 2 shows yield produced by irrigated orchards from tree age 4 to tree age 17 on a farm near Tzaneen, Limpopo Province. Table 1 shows the annual rainfall, the volume of water applied in irrigation and the average yield achieved over the past six years, 2014 to 2019, on this farm. 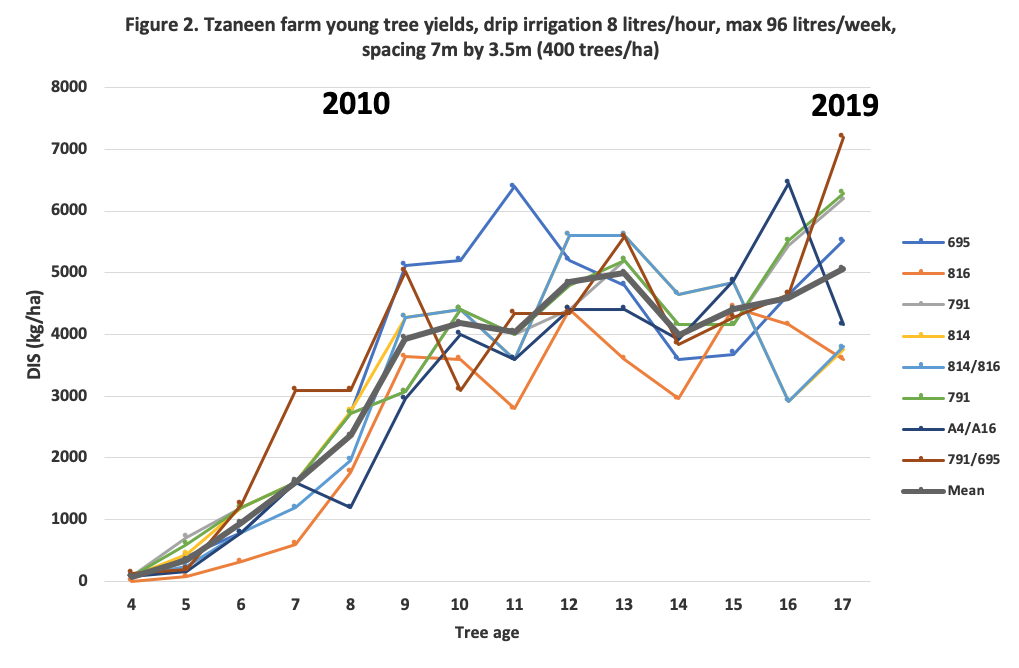 Unfortunately, there is no directly comparable yield data available from unirrigated orchards close to this Tzaneen farm. However, dryland orchards in that area will commonly produce 2 tons to 2.5 tons DIS/ha from similar aged trees. If we assume the dryland yield at 2.5 tons DIS/ha in Tzaneen, then the WUE from 2014 to 2019 varies from a low of 1.2kg DIS/m³ in 2016 to a high of 3.9kg DIS/m³ in 2014. Even the low WUE in Tzaneen is higher than the WUE found by Smit et al.

The average long term annual rainfall at the Tzaneen farm is 1 200mm, so the yield performance of the range of cultivars illustrated in Figure 2 over what can be considered as a “dry cycle” from 2014 to 2019 is an impressive achievement. It is made more impressive by the fact that these mature trees managed average production of 4.65 tons DIS/ha from tree age 12 to tree age 17 using only 862m³/ha per year on average.

Given that the present water allocation published in the SAMAC website is 11 times larger than the average amount used to achieve exceptionally high yields during a dry cycle on the Tzaneen farm, it seems that some urgent action is needed by SAMAC/WRC/Department of Water Affairs/Department of Agriculture/irrigation consultants and irrigation service providers to reach some consensus on the definition of the water requirements of macadamia orchards on the basis of sound scientific evidence.