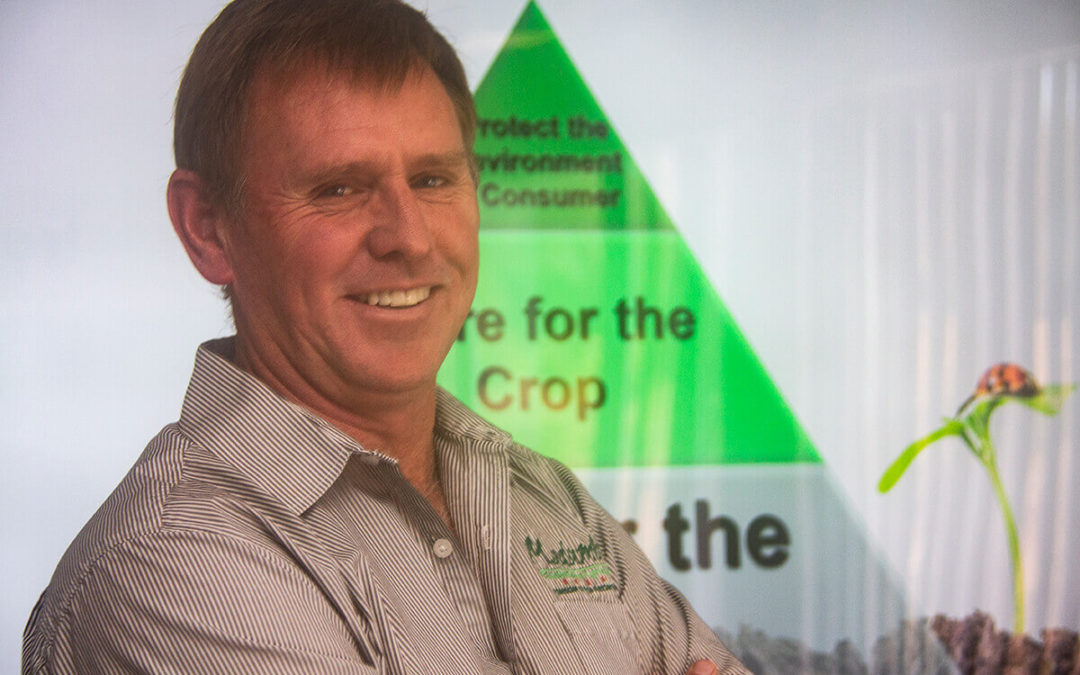 Macadamia farmers are urged to look to their soils for the production of resilient trees able to produce quality yields acceptable to consumers who are becoming more and more concerned about the negative impact of agriculture on the wellbeing of the planet.

Climate Change is here and the contribution by agriculture to the degradation of the planet has meant consumers are calling on farmers to account for the ways in which they produce our food.

Business Development Manager and Key Account Manager in KwaZulu-Natal for Madumbi Sustainable Agriculture, Mark Hutton says the restoration of soil health is not only critical for the future of sustainable agriculture worldwide, but absolutely necessary to feed an over-populated planet with nutrient dense food.

Madumbi Sustainable Agriculture is a South African company based in Hilton, KwaZulu-Natal intent on developing biorational solutions for the growth and protection of crops.

According to Hutton all emerging evidence pointed to the fact that past thinking which focused mainly on how a plant thrived above the ground, rather than what was going on below ground, was just no longer sustainable.

The impact of the industrial revolution on agriculture, he said,  had seen the degradation of the planet’s soils through the over application of chemicals, inorganic fertilisers and the exploitative extraction of carbon which had effectively robbed plants of their ability to fight pests, disease and stress while leaving food often devoid of taste and nutritional value.

South Africa’s waters, he added, were heavily polluted and historically farming methodologies in the country have starved the soil of carbon.

Farmers, he said, were having to ask themselves what it really means to produce nutritious food in concert with environmental best practice.

“Let’s take macadamia trees as an example. Macadamias are indigenous to the sub-tropical forests of eastern Australia. We are planting them in areas without all the attributes of a sub-tropical forest. As a result, factors linked to stress are becoming prevalent in our orchards.”

“As a farmer I now farm soil before I start farming my crop.  Great crops grow in well aerated soils which are able to hold water and recycle nutrients and carbon,” Hutton said.

The miracle of plants

Soils are made up of sand, silt and clay, as well as aerobic microbes and organic matter or carbon which like water is finite.

“Soil microbes are the guys working to remove any compaction in the soil. But farmers continue to use machines to rip and turn the soils. During my farming years I took soils alive with earthworm and microbes and had great soil structure able to produce above average crops and turned them into those able to produce only declining yields. And that was in a very short space of time. I successfully ignored the wealth I had beneath my feet and through misinformed farming practices I effectively broke down the soil structure, killed the fungi and the bacteria while using the soil as a medium to plant only.”

Popping a mound of healthy soil under a microscope, Hutton shows how microbial rich soil is populated by bacteria, fungi, arthropods and other soil organisms busily going about their business.

“I have seen first-hand how we can push the boundaries in agriculture by paying attention to the health of the soil. If growth is expected now, then change is absolutely essential,” he said.

“We need to understand how the soil food web works and how we can use it in our farming operations. Focus on maximising the carbon and nutrient cycle and in so doing removing the compaction problems, aerating the soil and making sure there is effective water filtration and holding capacity while at the same time cutting down on nutrient leaching.”

What can nature do for crop farmers?

Plants take in CO2 from the atmosphere and combine it with the energy from the sun through photosynthesis to allow for the absorption and transportation of nutrients for reproduction and food production, pest and disease resistance and to allow root exudates to feed the soil.

Oxygen is then released by the plant into the atmosphere which is fundamental for the survival of all beings. The root exudates and plant material in the soil (containing carbon and nutrients) are consumed by bacteria and fungi and in this process form the soil structure. Bacteria and fungi are the foundation of healthy microbes in the soil.

And, according to Hutton, the more the presence of these beneficial bodies was encouraged the more responsive the whole food web became.

“During this natural process the nutrients consumed by the fungi and bacteria become insoluble and therefore are not susceptible to leaching. These nutrients are consumed by protozoa, arthropods and free living (beneficial) nematodes. These guys then excrete the now soluble nutrition back into the root zone for the plants to absorb in the correct balance all day and every day throughout the year. The plant uses the exudates to stimulate bacteria and fungi production. The volume of exudates flushed into the soil sends a message detailing the nutritional demand of the plants which the soil web responds to accordingly.

“All forms of life in the soil are basically carbon. When roots, fungi, bacteria, protozoa, nematodes, etc. die, they are essentially returning carbon to the soil. By increasing the fungi and bacteria in soil we begin to grow the arthropod numbers which also feed on the root feeding nematodes (non-beneficial) which will lead to their numbers decreasing.”

In addition, once the beneficial microbes are built up aeration and water filtration increase. And once this happens the development of aerobic soils is underway which then creates an environment where diseases such as Phytophthora cannot thrive.

In short, Hutton said, this meant the soils were in a condition to grow resilient crops resistant to abiotic and biotic stresses which produced nutrient dense healthy food for consumption.

Living and balanced soils also play a critical role in balanced insect activity; where the good insects can reproduce in such a way that they are ready and able to fight against pest infestations.

Hutton warned however, that making the change to a more bio-organic regime should be a slow and steady process.

“My whole aim is to get farmers moving in the right direction and then we can build from there. We must start working with nature to build crop resilience and health rather than against it.  I compare our work to the workings of compound interest. If we do one or two small things right they will start to compound. Incremental improvements will mean all the right elements of the soil system will start to thrive and things will start to align, resulting in rich, fertile soils able to produce tasty and nutrient-dense foods while at the same time working towards more environmentally responsibility farming methodologies. In short, if we look after the soils, the rest will look after themselves,” Hutton said.