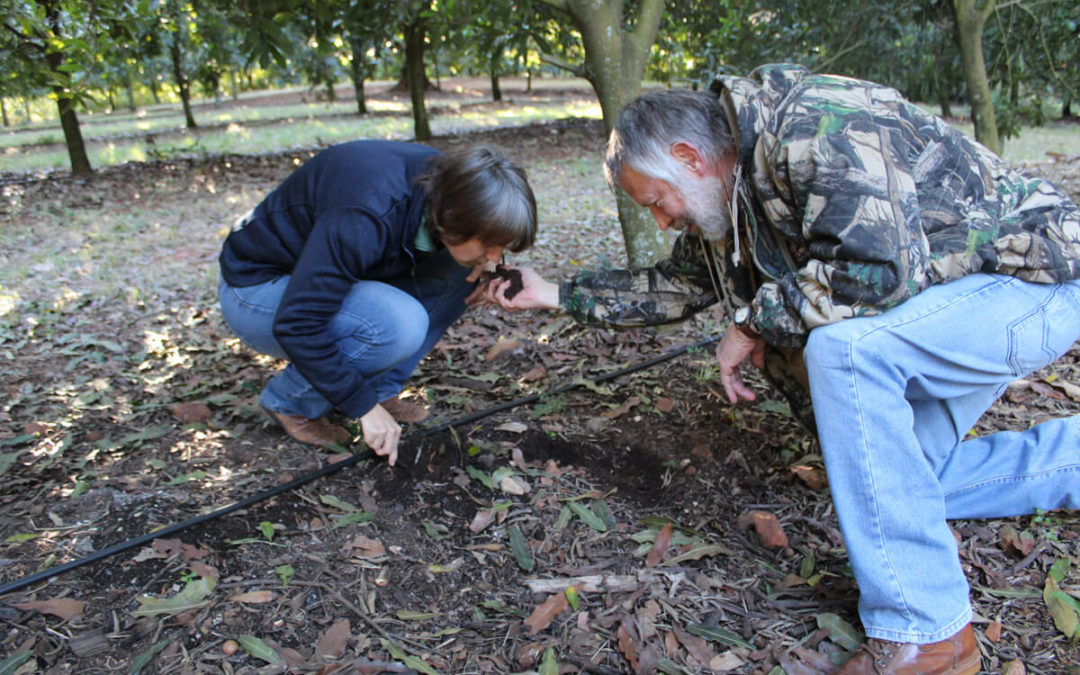 Growing up at her father’s knee instilled a love of farming in Gertien Viviers, and has also led the young woman to gradually take over the responsibility of the farm’s management under the guidance of her dad, Doors le Roux.

As a result, she recently landed the runner-up spot in the Transvaal Agricultural Union Young Farmer of the Year award, for the second time!

“Sy boer mooi, (she farms well),” says Le Roux, adding with pride that farming with his daughter is an “absolute joy”.

“We never disagree, and I must just add, she is not lazy!”

Viviers was two years old when the family moved to the farm.

“I grew up here so farming is all I’ve ever wanted to do,” she said. “My father always kept us involved in the farming activities. During school holidays my brother and I worked in the guava packhouse. We did everything together. We travelled around on the farm with him. He would point out various aspects of the operation to us, which not only cultivated my great love for farming but a greater understanding of and love for the land.”

“My father and I have an easy relationship. We make the big decisions together and we don’t get angry with each other. We are lucky – we just get along really well.” 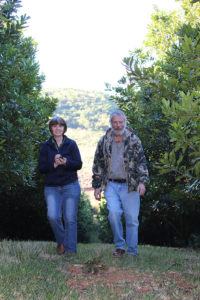 The property has 80ha planted to macadamia trees and 4,5ha under guava trees.

Viviers was saddened, however, about the guava trees gradually being phased out due to wilt disease, which had decimated orchards in the region.

“Everything we have on this farm is due to the guava harvest; it is a profitable crop. We would love to plant more to spread our risk between macadamias and guavas, but it’s just not possible.”

Her management of the macadamia orchards, on the other hand, has won her several prizes for the lowest unsound kernel recovery (USKR) in the Levubu region, averaging between 1,5% and 2,5% USKR. The total crackout ranges from 28% to 32%.

In some of their  orchards, trees were planted as recently as February this year, whereas in others, the trees are closer to 50 years old, requiring careful management of their height and access to light to ensure maximum yields.

The orchards boast a mixed bag of cultivars, from the original Pahalas and 246s, to the newer Nelmaks and Beaumonts.

The Pahalas, she said, were responsible for bringing the overall average down, however.

“I would like to take out the Pahalas once the younger trees come into production. My plan is to start again from scratch, rather than graft on to the old trees. From what I have seen and from what I have gleaned from farmers who have done the grafting, the practice does not seem to work very well.”

The Shortlands soil on the farm is heavy and prone to compaction, which makes it a challenge to manage. While everything is done to keep the soil loose, as soon as it gets wet again, Le Roux said, it reverted to its pre-existing structure as if it had never been loosened at all.

This meant tractor trips were limited in the orchards and applications of about 60 litres of compost were applied to each tree after the harvesting was done.

Le Roux said using manure in the compost mixture had sent the phosphate content soaring. “Macadamias want phosphate, but too much causes yellowing of the leaves. And because we have Shortlands soil, the nutrients tend to get clogged in the clay and it is difficult to get rid of something once it is in over-supply in the soil,” he said.

Furthermore, the Shortlands’ high clay content had caused problems with root development in the trees.

“The roots find it difficult to penetrate the soil and the nutrients get clogged in parts of the soil, which means they don’t always reach the roots. It does influence the yield because it’s a  struggle to get an uptake of cations (positively charged ions). Irrigation is also tricky because it is easy to over-irrigate this soil. We have had to make extensive adjustments to our irrigation system and we irrigate a lot less now than we used to,” Viviers said.

Drip irrigation is used to water specific areas with an aim to keeping the root zone wet while the soil in between the trees remains dry.

“But again, this means the system can easily drown the roots,” she added. “We have adjusted the irrigation flow to apply less water and allow the soil to dry out a bit, just to give the roots a chance to breathe.”

The trees are irrigated every second day, with 24 litres of water applied to each tree. Fertiliser is applied via the irrigation system once a week.

Le Roux said the challenges presented by the soil type meant their farm management required a “boots on the ground” approach.

“I drive around with a garden fork in my bakkie (truck), stopping periodically to see what is happening beneath the surface of the soil. We can’t just follow an irrigation programme blindly. A macadamia tree does not easily die from a lack of water. An irrigation expert once asked me how long I could survive without water. Three days? Four days? And how long could I survive with my head under water? Two minutes? He said it was the same with trees. Trees are better adapted to survive with less water than they are when there is too much water.” 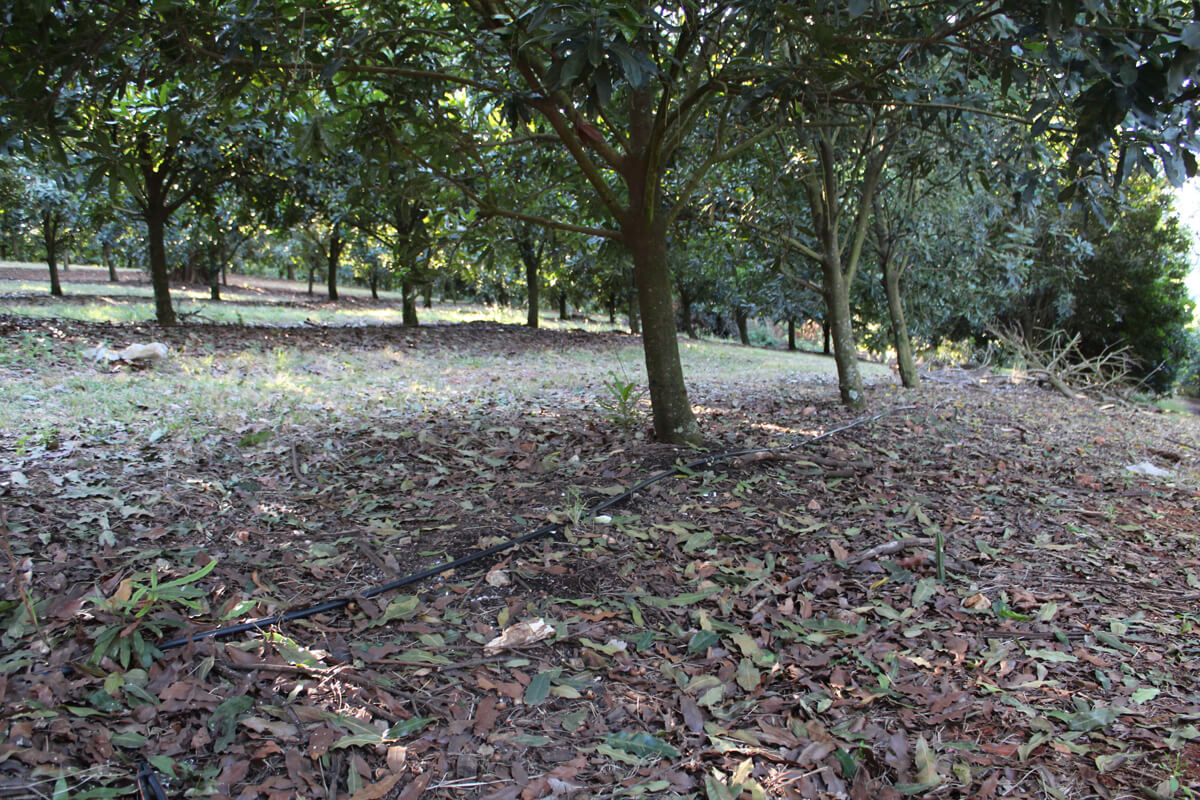 Viviers is pruning the trees to allow more sunlight into the orchards.

Rondommooi’s macadamia season starts as early as February when the first nuts start to fall. Flowering also starts earlier than in other areas. This year, for example, the orchards were in bloom by late June.

Viviers said that this was a particularly unusual year, however, as flowering would usually get under way in August. “We’ve had a really bad crop and I anticipate our yield has dropped by 50%. We completed our harvest as early as June. Some farmers’ crops are down 25%, while others are down by more. We are not entirely sure why this has been such a bad year. Some farmers say the nut set wasn’t good, but our trees had a really good set. In November we experienced two big nut drops due to extreme heat at the end of October.”

Le Roux said he always used to say global warming was nonsense, but the recent changes in climatic conditions had changed his mind.

“When we moved here 28 years ago we would average about 30°C in the summer. But it has certainly gone up. We even reached 41°C this year. The minimum temperature is usually around 6°C and this has also increased. In winter we used to get a light frost, but I haven’t seen frost here in ages. The seasons have also shifted. We only get rain at the end of November and in the middle of December, and our flowering season is now earlier.”

Viviers said the earlier flowering season, however, was beneficial since it was cooler and the flowers were less susceptible to drop than during the higher temperatures in September.

Levubu has an average annual rainfall of 700mm, with a variable between 300mm and 3 000mm over recent years.

The biggest challenge facing Levubu macadamia farmers, Viviers said, included the excessive heat, orchards planted to incompatible cultivars for the region, and big trees, which were difficult to manage.

“Nelmak26 does very well here, but the Nelmak2 doesn’t. On other farms in the area Nelmak2 is one of the best producing trees. Beaumonts do well too, but not on other farms in Levubu,” she said.

According to Le Roux finding the right cultivar for the right area was particularly difficult as each variety had its own micro-climatic preferences, or put more simply, what worked for a neighbour would not necessarily work at Rondommooi.

“The macadamia industry is still young and the information we have is limited. Because the macadamia tree is a proteoid we don’t fully understand how they function. Their cluster roots, that look like a bottle brush, are very pH sensitive and there are a lot of unknowns. It is not an easy crop to manage. We can plant the trees and get a harvest, but if we want to do really well, then we need a better understanding of what the trees need or don’t need,” he said.

In dealing with the big trees, Viviers said they were pruned to keep them below six metres to guarantee proper pest management.

“Pruning must be done very carefully so production isn’t lost, but we also know we mustn’t over-stimulate the tree, resulting in it producing new branches in all directions.”

For pest management, a clean-up spray of organophosphate is applied after flowering, then followed with a spray programme every four weeks.

The natural bush bordering the farm also had its advantages and disadvantages as bees had a  natural habitat in which to forage during the off season, while on the other hand, the developing nuts were hugely attractive to troops of ranging baboons.

“The damage they inflict on the trees is considerable. We have installed electric fencing around some the orchards, which is effective as a prevention strategy,” Le Roux said