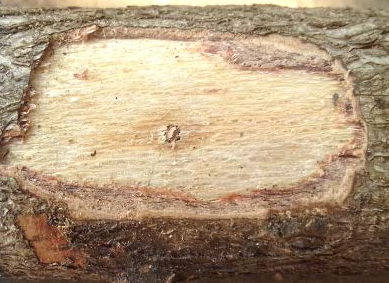 As Forestry, Fisheries and Environment Minister Barbara Creecy has called for submissions on an intervention plan to tackle shot-hole borer beetle infestations, research just released by the Forestry and Agricultural Biotechnology Institute (FABI) suggests macadamia orchards are not under threat for now.

The public was invited by the Department of Forestry, Fisheries and Environment Affairs to submit suggestions by the end of October 2020 on how to fight the march of the Polyphagous shot-hole borer, which was first discovered in London plane trees in the Pietermaritzburg Botanical Gardens in 2017.

However, in research funded by the macadamia industry body SAMAC, the University of Pretoria, The Centre of Excellence in Plant Health Biotechnology (CPHB) and NRF Thuthuka, it’s believed macadamias are in fact what is termed a “non-productive host” for the pest.

The project was also supported by Danroc, which sponsored the seedlings used in the seedling pathogenicity trial, Mattison Farms, which provided detached logs for the assays, and Shawn Fell, who contributed to the setting up of the pathogenicity assays.

Dr Gerda Fourie, a senior lecturer on the Macadamia Protection Programme at FABI, who conducted the research with Professor Wilhelm de Beer and Dee Twiddy from the University of Pretoria, said preliminary trials were showing a hopeful outcome. 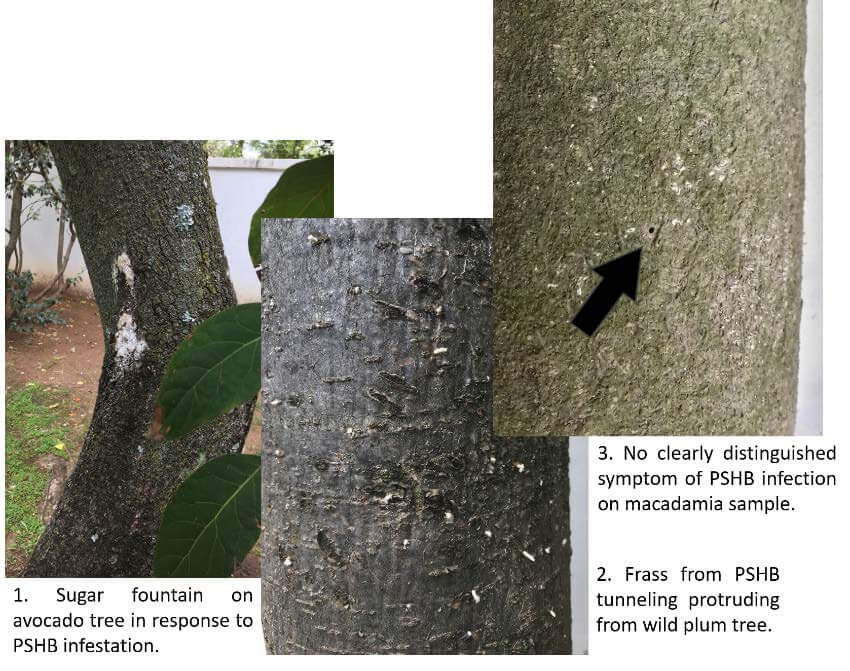 “Based on the results of this preliminary trial, the study’s outcome appears to be more optimistic than initially anticipated. The lack of aggression shown in the pathogenicity trials as well as the notably low number of confirmed cases of the PSHB in macadamia (three infested trees to date) provide a hopeful picture for growers,” she said.

Evidence of the beetle was found in three macadamia trees, one in an orchard near Ballito on the KwaZulu-Natal North Coast, and two in orchards near Port Edward on the South Coast last year.

The borer, also known as a “fungal farmer”, bores into wood tissue, creating a network of tunnels known as a gallery. The beetle then inoculates the walls of these galleries with specific fungi that serves as a food source. Fusarium euwallaceae is one of the three main fungal partners. The fungus is mildly pathogenic, and the majority of tree fatalities attributed to the beetle are a result of an increased fungal load, which then blocks the vascular tissue in the tree, leading to dieback.

Fourie said the beetle was unable to reproduce without this symbiotic relationship and so far results had shown the fungus grows very slowly in macadamia trees, therefore limiting the potential of the pest’s spread in orchards.

But, she added, the industry was not out of the woods yet and the beetle was on the march in pecan orchards, and decimating indigenous and alien trees in Gauteng and the Western Cape. In short the shot-hole borer was a major threat to bio-diversity and the indigenous forests in the country. 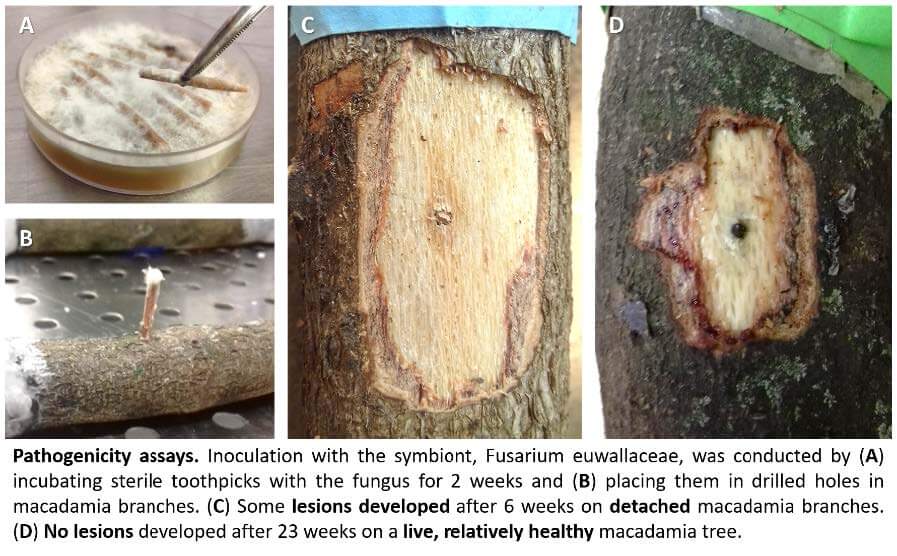 “We believe the slow growth of the Fusarium euwallaceae may be the reason we have not observed reproduction in macadamia trees, both here in South Africa and in California and Israel. However, the fungus is still introduced into the tree, so the long term effect remains an essential question to which we don’t have the answer yet. And until we can answer that accurately we cannot say for sure what risk the pest and its fungus combination poses to South Africa’s macadamia industry.”

In their report the researchers recommended a number of practical steps for farmers to manage potential outbreaks of the pest.

“We advise farmers to remove Castor Bean (Ricinus communis) as the PSHB breed and multiply quickly in the woody stems of older plants. Farmers should also closely monitor other reproductive trees grown close to their orchards such as English oak, London plane, maples, and box-elders, for example.”

Earlier this year the Minister of Agriculture, Land Reform and Rural Development Thoko Didiza also released draft control measures for the pest, in line with the national Agricultural Pests Act.

According to the measures it is compulsory for farmers to notify the relevant authorities if they find shot-hole borer on their properties.

It is then vital that an inspection is undertaken urgently to identify and confirm the presence of the pest. Management measures have to be implemented as well as the submission for a permit to have the tree or trees removed. According to the Act farmers are not authorised to remove the infected trees without a permit and it is an offence to do so.

Once measures have been taken to remove the infected trees the authorities will again inspect to make sure there is no evidence of the beetle before giving the area or orchard the all-clear.

Fourie said FABI had made submissions to inform the proposed legislation by both the Departments of Forestry, Fisheries and Environment and Agriculture, Land Reform and Rural Development.

While different trees may show varying signs of the presence of the Polyphagous Shot-Hole Borer, these are the more common signs of an infestation: