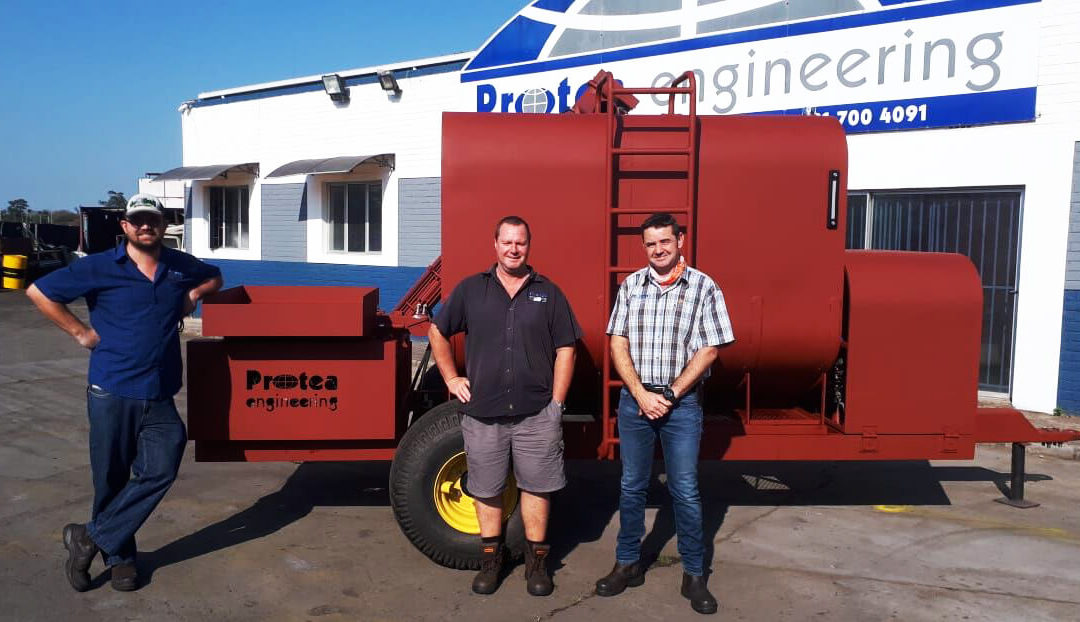 Design and timing are behind a move by South Coast macadamia farmer Robert Charlton-Shields and Durban’s Protea Engineering as they launch mobile de-husking innovation to improve efficiencies in orchards.

Never one to shy away from following through on a new idea to improve efficiencies, Robert Charlton-Shields built the first mobile de-husker in 2014, which has been used since – with ongoing tweaks – at Fairview Farm, owned by he and his wife Karen, on the Oribi Flats in southern KwaZulu-Natal.

However, in a move that puts innovation and development ahead of personal gain, he has handed over the machine’s design and the manufacture to specialist precision machining firm Protea Engineering, saying while he understood intellectual property was an important consideration in any new piece of equipment, it was more important the benefits of the unit be used for the greater good of the country’s burgeoning macadamia sector.

“I have realised the benefits of this unit on our farm over the past few years and I believe the design and timing is such that the industry needs these sorts of new ideas sooner rather than later. As a grower, I feel it is equally important to support innovation in an industry in which we are so vested to ensure it continues developing and growing,” he said.

Charlton-Shields decided to build the mobile de-husker to improve operational efficiencies because he had to send out a tractor and trailer daily to collect the bags from the orchards.

“That meant our pickers had to stop what they were doing to load the trailer, return to the de-husking facility and then unload the bags. The end result was we lost about an hour’s worth of picking time each day. We also had the problem of collecting and redistributing all of the husks as mulch into the orchards. So the opportunity costs came down to the double handling of both bags and husks and the increased rate in daily harvesting.”

The first mobile de-husker was built on the farm in 2014, with gradual improvements on the initial design each season. “Over the past few years we have optimised the initial design. For example, where it was PTO-driven before, it is now fully hydraulic.”

The improvements led to increased operational efficiencies in the number of tons per hectare de-husked and reduced the turning circle of the machine, minimising the overall time spent de-husking.

The collaboration with Protea Engineering has also seen additional improvements, including the optimisation of the hydraulics system’s torque and flow rate, reducing the overall kilowatt requirements. Also, the engineers have redesigned the mechanical parts to reduce wear and tear and cut back on the time required for repairs. A further improvement is in the auger design to assist in removing nuts that are not fully de-husked, thus reducing the time needed for secondary de-husking.

Protea Engineering’s Shane Cass said the collaboration with Charlton-Shields was exciting and had opened up new avenues of business in an industry that was on a dynamic growth trajectory.

“Protea Engineering was founded in 1981 primarily to service KwaZulu-Natal’s textile industry. However, over the years we have had to evolve as the clothing and textile industry in the province collapsed after the flood of cheap clothing into the country from China. Since then we have prided ourselves on offering tailor-made and intelligent engineering solutions for different client needs. But in 2019 we shifted our strategic thinking to the manufacture of a specific range of bespoke high-quality products.”

The mobile de-husker, he said, was a perfect fit for their re-aligned thinking.

“We were manufacturing a cherry picker that was used very successfully by producers. We then explored whether the unit could be used in the avocado and macadamia industries. Specialists in the latter industry said we should rather look to fill a gap in the market for de-huskers, drying bins and fans.”

Cass said after careful consideration a decision was taken by the firm’s principals to develop a unique product range specifically for the macadamia industry.

“We met Robert on his farm and I guess you can say the rest is history!”

The first unit to be built by Protea Engineering has now rolled off the production line and is ready to show what it can do.

“The wonderful aspect of our collaboration with Robert is that we have been able to add our expertise to a unit that has already had its design and performance thoroughly tested. And the improvements we have made have been under the guidance of and with the technical research provided by Robert,” he said.

The new unit has an empty weight of 2.8 tons, a hopper with a carrying capacity of three tons, and a four-lane rear-mounted de-husker. The mobile unit is fully independent of the tractor PTO and is powered by a Lombardini LDW1003 engine. The chassis is mounted on flotation tyres to prevent compaction in the orchards. Further, the machine can be operated while moving, and is equipped with bag straps and a bottom discharge opening. The augers offer secondary de-husking and sift out any smaller nuts, sticks and debris picked up in the orchards.

All the manufacturing is carried out at the firm’s premises in Westmead outside Durban, which, said Cass, makes it convenient and cost-effective for farmers to have the unit serviced.

Charlton-Shields said the Protea Engineering unit would not only reduce the daily de-husking time but improve the tonnages de-husked in a day. “The reduced operation cost in the new machine versus the current one means it will improve bottom-line earnings by cutting processing costs,” he added.