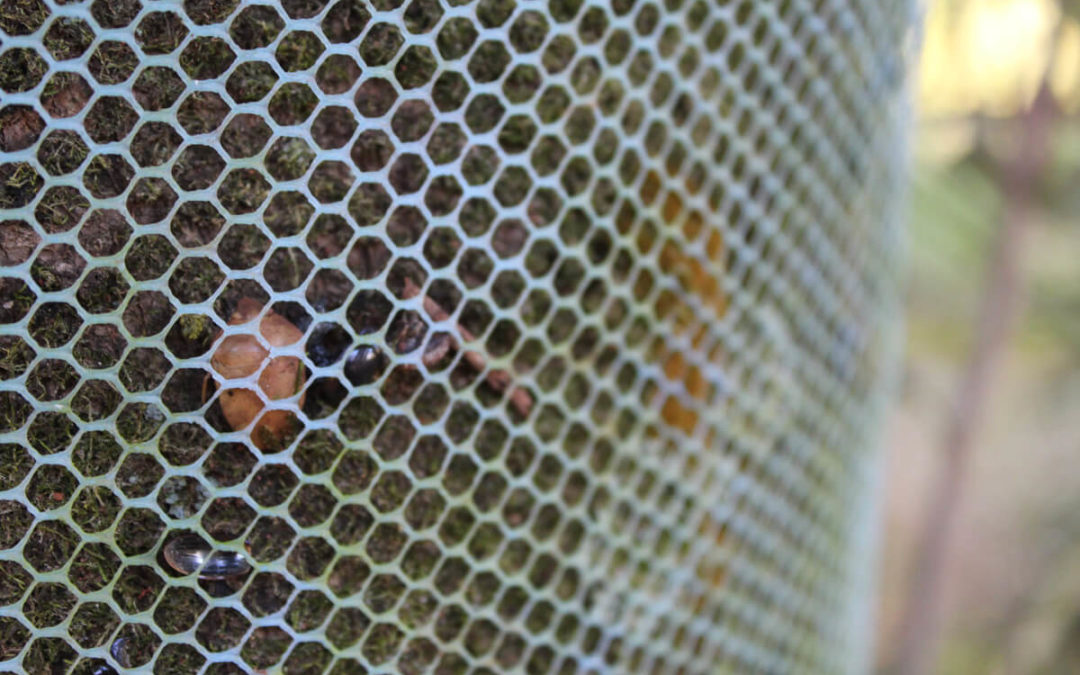 Stinkbugs are a worrying thorn in the flesh of macadamia farmers and it would appear their numbers are on the up, despite the increasing use of pesticides in our orchards. Experts warn that if the industry is to survive, a paradigm shift is needed to treat the problem holistically by finding sustainable and intelligent solutions for infestation control.

“If farmers spray according to a fixed calendar programme, they are already caught up in a race they can’t and won’t win,” says researcher, farmer and owner of the Levubu Centre of Excellence Dr Elsje Joubert.

An expert in the production and growing of macadamias, Joubert has spent much of her career studying ways to improve crop quality and crackout percentages. She says it has now become more evident than ever that the increased use of pesticides in orchards is not only counter-productive to the advance of the industry but has had little or no effect on improved yields.

“For example, on a 1 000ha farm, a farmer will struggle to apply pesticides to his or her whole farm in just three weeks. As a result they will end up in a cycle where a tractor is permanently circulating through the orchards, spraying pesticides. Once the driver finishes at the one end, he will have to start again from the beginning. Managing pest infestations in this way makes it really difficult to keep tabs on or to understand what is happening in the orchards. All they are doing is keeping up a near automated spraying regime without checking to see what is living, dying or surviving there. The result of this kind of pest management is the natural predators, pollinators and cross pollinators suffer. If the good guys suffer then the crop suffers and slowly but surely the SKR (sound kernel recovery) will dwindle, if it hasn’t already.” 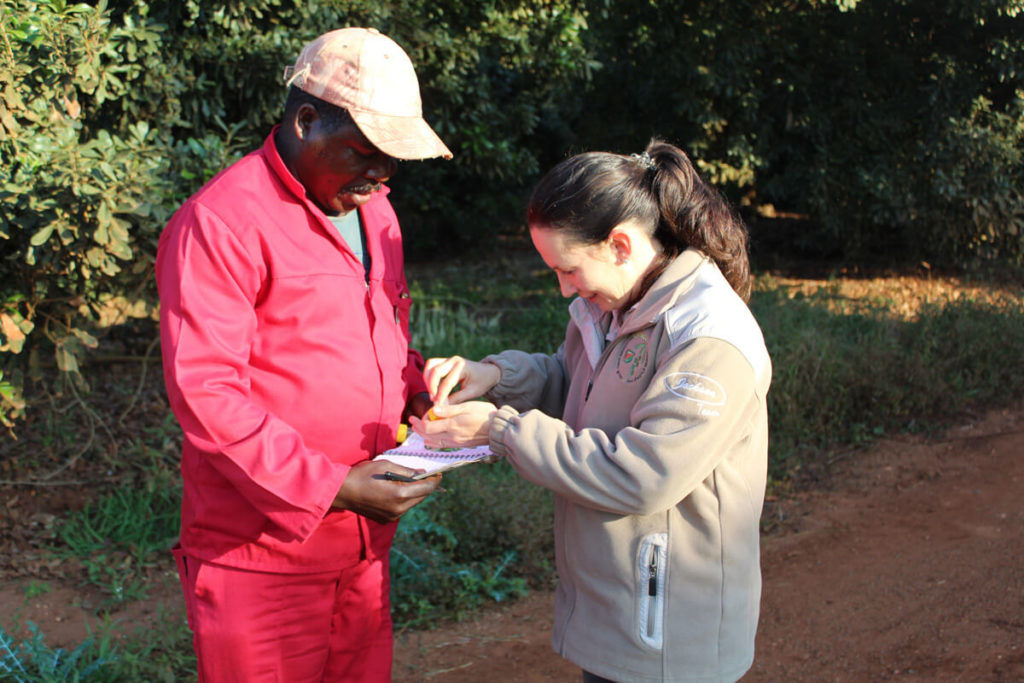 Johnathan Maknanisa, scout for Maluma Boerdery, found 95 stinkbugs on 15 trees during his early morning scout. Since four per tree is the economic threshold, Joubert prescribed an application of pesticide.

She says failing to scout for pests and just spraying according to the calendar is ill-advised. “To illustrate this, in the first week of March hordes of stink bugs might fly into the orchard. But if the farmer isn’t using scouts and the calendar programme says spraying is only necessary in three weeks’ time, well, that means the stinkbugs are left to feast on the nuts for the next three weeks. And then when the farmer finally sprays, masses of dead bugs fall out of the trees making it look as though the pesticide application has really worked – until he gets his quality sheet from the processor and all he can see is that the unsound kernel percentage has rocketed.”

Joubert advises farmers to return to basics, look after the ecology in the orchards, and farm using all-inclusive or holistic methods.

When in doubt, scout

Scouting for stinkbugs is time consuming, but crucial for optimum control. Joubert says farmers should divide their farms into smaller units, dedicating a team to each unit and managing these accordingly.

“We have Avima insect nets placed on trees on our farm and on trial sites in Mpumalanga and KwaZulu-Natal. We are still waiting for the final results from the latter two provinces, but in Levubu they have shown promise.” 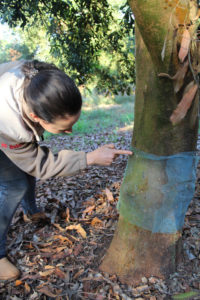 The nets on the Joubert farm are three years old already and still do a good job in aiding the detection of stinkbugs.

Stinkbugs lay their eggs on the nets and once the nymphs hatch and come into contact with the net, they die. The nets definitely play a role in preventing large-scale breeding in the orchards, although she says the greatest benefit is that the presence of stinkbugs in the nets warns others of their presence.

“Once the number of stinkbugs scouted reaches a critical level, you will have to apply your pesticides in a clever way. Alternate between active ingredients and pay attention to the residual effects of the chemicals.”

Critically, Joubert says the amount of pesticide applications can be reduced by scouting every week and then only having to spray the problem areas. “So instead of applying a blanket application to the whole farm, you only spray certain areas based on scouting.

“If you look at what each pesticide application costs and you do the calculations of blanket spraying versus only problem areas, you will be surprised by how much money you save. Yes they can fly away but when you spray while it is still cool and the stinkbugs haven’t started flying, your chemical effect is good. But you need to scout (i.e. pick up what lies on the ground) again to make sure your application was effective. Yes, this is a lot of management and it is time consuming, but that is farming.”

She advises farmers to employ one person to do the scouting every day, as this is still cheaper than spraying the whole orchard, in addition to the environmental benefits, which will also go a long way to improve yields and crackouts. 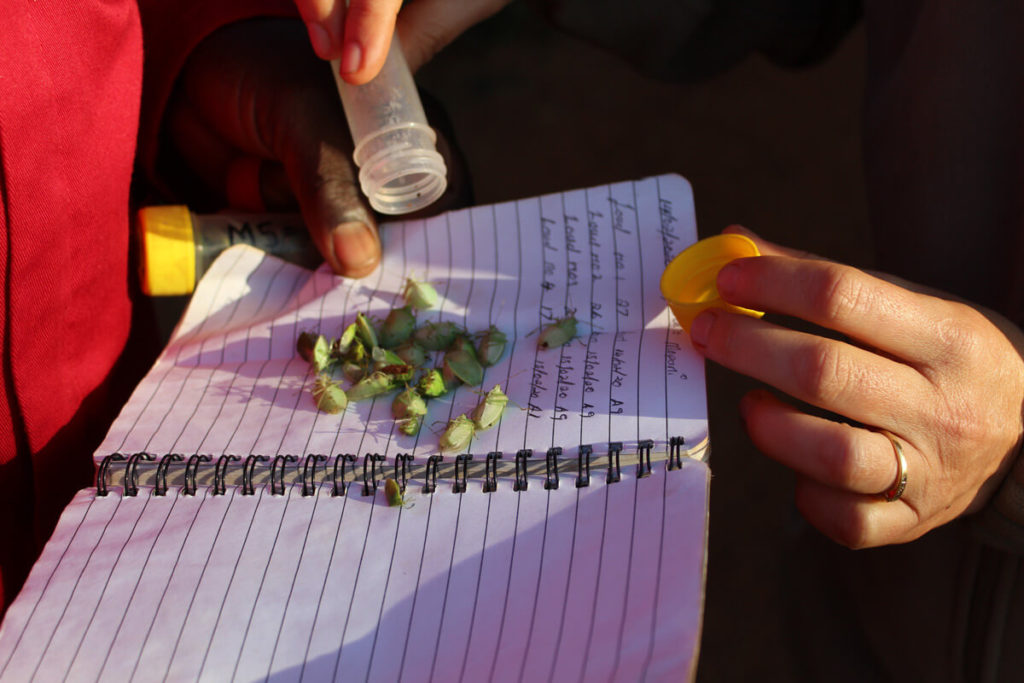 Johnathan Maknanisa, scout for Maluma Boerdery, found 95 stinkbugs on 15 trees during his early morning scout. Since four per tree is the economic threshold, Joubert prescribed an application of pesticide.

** Joubert wishes to clarify her statement on the efficacy of aerial sprays in our previous article titled Better stinkbug control: it’s all about tree health. She said aerial sprays, using combinations of a diamide and pyrethroid, must be used to combat stinkbugs, not organophosphates, as was reflected in the article.