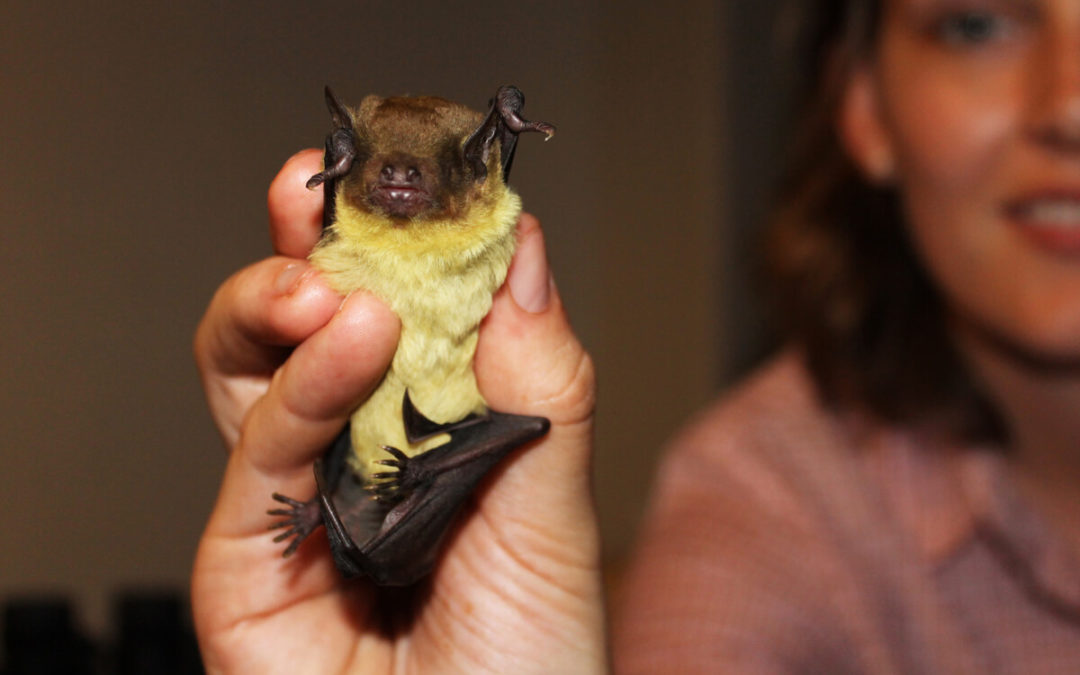 Above: Academic Dr Valerie Linden holds a yellow house bat that she and colleague Dr Sina Weier have under surveillance in macadamia orchards in Limpopo.

After extensive research in South Africa’s northern province of Limpopo on the roost preferences of insectivorous bats, custom-made bat houses recently erected in macadamia orchards in the Levubu region are expected to prove hugely successful as roosts for these highly threatened creatures.

In the 2019 research, scientists from South Africa’s University of Venda and the University of Göttingen, Germany, set about discovering what artificial roosts are preferred by the different species.

In the report titled “The use of bat houses as day roosts in macadamia orchards, South Africa”, Dr Sina Weier, lead researcher and former SARChI Chair on Biodiversity and Change, School of Mathematical and Natural Science at the University of Venda, says the loss of roost sites is a major driver of the worldwide decline in bat populations, and roost site preferenceS, either natural or artificially provided, are not well known for African bat species specifically.

“From June 2016 to July 2017 we monitored thirty-one bat houses, mounted on poles in six macadamia orchards. Twenty-one multi-chambered bat houses of three different designs were installed in sets of three. Then five rocket boxes, painted black and white, were put up in sets of two and one colony bat house was installed.”

All were monitored monthly and Thermochron iButtons were installed at each of the three entrances of one set of three bat houses to record temperature variation between the houses every 90 minutes.

Over the 12 months, 166 individual bats were seen in the 31 bat houses, with a maximum of five in one box.

The houses assumed as the warmest and best insulated, with the sets of freestanding mounted boxes, were recorded as the most attractive roosts. The distance to water, altitude above sea level and the height of the houses, seemed insignificant, although Weier suggests that in more arid regions, the distance to a water source could be significant. 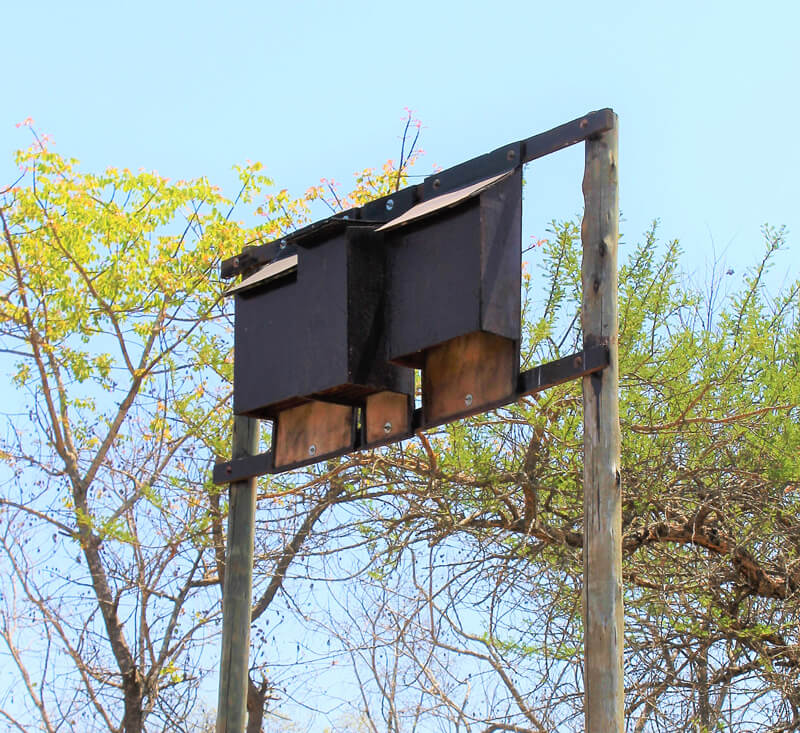 Bat houses erected during a research project in 2016 and 2017 to establish what types of artificial roosts were preferred by species predating on insects in macadamia orchards.

Co-author of the paper Dr Valerie Linden, a doctor in philosophy and a former member of the Department of Zoology at Venda University, said after the release of the research, she and Weier had worked further to develop their own concept bat houses.

“In November last year we put up the first prototypes, also in Levubu macadamia orchards. The one experience or observation we have now made is the most important factor is durability. Especially where we are, in a very high rainfall area, or at the coast, or in fact anywhere where macadamia trees are grown, it is so important to use durable materials.”

Linden, who is now working as a technical manager at Springfield farms while still supporting academic research on a part-time basis, said the new boxes were mostly made of outdoor or marine graded plywood. On top of that a coat of paint was applied for extra protection. Tin roofing was added, as well as tin side panels to protect the houses from the rain.

“We have been talking about trying other materials and designs to accommodate more bat species, as they all have different preferences, but we are still in the early days of our thought processes,” she said.

One of the main reasons for the durability, she added, was it could take months or even years for the first bats to move into a man-made roost. “That means you want to handle or repair the house as little as possible. And of course, once the bats have moved in you want the box to last a couple of years at least. Once they become used to artificial roost boxes or bat houses it becomes much easier to get other houses occupied. So, when one box is showing signs of decay, putting up a new one close by will result in the bats moving across quite easily. It is the same if a farmer wants to increase the numbers of bat houses in the orchards. To get the first ones occupied is challenging, but once they move in the rest become occupied in no time.”

Linden said the boxes built and installed in the macadamia orchards in November were already showing signs of habitation. “This is really giving us the hope that they will be occupied quickly. Unfortunately, we have no hard data yet on the success rate, but we are very confident from what we have seen so far.”

Weier said the most common occupant of the bat houses under research was the yellow house bat.

According to research and experts the world over, all bat species are in decline, with at least one quarter of global bat species facing extinction due to land use changes, especially agricultural intensification. Proactive management of bat populations wherever they are to be found, is viewed by these experts as “indispensable” to sustain the ecosystem services they provide.

Referencing a research report authored by bat expert Professor Peter Taylor, Weier, who is now a member of the Afromontane Research Unit at the University of the Free State, said healthy bat populations in macadamia orchards were not only measurable in monetary terms, but absolutely critical to the success of integrated pest management methodologies. 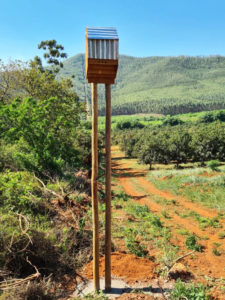 A new design of bat box, which researchers Dr Valerie Linden and Dr Sina Weier erected in Levubu macadamia orchards in 2019. These are more durable, according to Linden.

Linden said if the bat houses were successful, or if bat populations increased over time through improved habitat conservation, the potential impact on orchard pest burdens was “huge”.

“Their value as a natural pest control is enormous. But birds are very important too. If farmers are implementing an integrated pest management strategy and are wanting to move away from the use of pesticides, increasing natural predator numbers is crucial. Artificial bat roosts are just one way of doing that. Protecting their natural habitat and natural roost sites throughout the orchards is another. And, of course, this brings added benefits to a host of other organisms such as birds or pollinators.”

However, the road to recovery was a long one, the researchers warned.

“Bat populations might only increase slowly and if a farmer does manage to attract the bats to the orchards then the use of chemical pesticides must reduce significantly. Bats are very sensitive, not only to habitat destruction, but also to pesticides,” Linden said.

“We are getting enquiries from farmers across the country who are all keen to find out how they can farm in a more bat-friendly way. We also present our results regularly at study groups, and articles such as this are making sure farmers are being made more aware of the value and importance of bats on their farms,” they said.