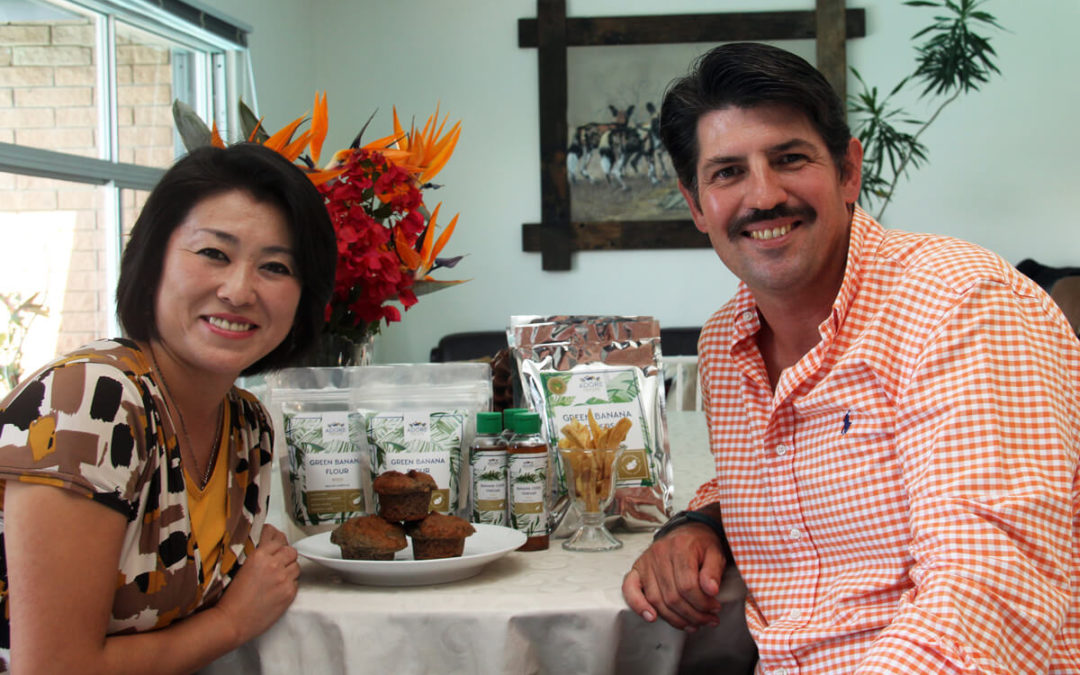 Andrew Doré and his wife and business partner Akane with some of the green banana and macadamia products they produce at their South Coast farm.

A few kilometres inland from the southern KwaZulu-Natal town of Port Edward, Andrew Doré and his wife Akane – which in Japanese means the colour of the setting sun – are seeing the fruit of five years of relentless hard work on a formerly derelict and depleted banana farm.

Today, the couple and their two daughters, Ange and Alina, live and work on 30ha of pristine farmland producing organic bananas and macadamias, which are converted into their Adoré Nature products: green banana flour, green banana chips made with Himalaya salt and macadamia oil, and green banana cider vinegar – with more in the pipeline.

“I love to cook,” says Akane. “I have been experimenting with the products. I use the vinegar in everything and make all sorts of baked goods with the flour. There are some really exciting new products and concepts in the pipeline.”

Andrew left South Africa in 2002 with a little money in his pocket and a job opportunity at Audi Japan. Setting up home in Tokyo, he says, was not only hugely challenging but a massive culture-shift in a city where more than 10 million people live and work cheek-by-jowl.

“Japanese society is high performing. Business is exactingly competitive. Everyone is in competition for a share of what is a crowded market,” he said.

A two-year stint working for the automotive corporate in Germany was a further feather in the cap of the fast-rising executive, but as a dyed-in-the-wool entrepreneur, he felt restless and unfulfilled.

As a passionate naturalist, Andrew knew instinctively that if he wanted to start something he could build and use to create positive change in the agri-processing sector, the best place to be was in South Africa.

“Despite the uncertainty linked to the land issue here, we really believe we can make a difference. We believe we can play a role in bringing about positive change. One of our first priorities, among many, was to focus on improving the living conditions of our staff – whom we took on with the property – and to assist them to improve their skills,” he said.

Taking stock of the appalling condition of the soils and the declining banana crop yield on the derelict farm, however, was probably the top challenge facing the couple.

“When I sent pictures of the farm to Akane before I bought it, she really was shocked! I think she thought I had lost my mind,” Andrew laughed.

The farmhouse was crumbling, most of the farm infrastructure was beyond repair, and little maintenance was evident relating to soil or crop health.

“The ground was lifeless, dry and unhealthy. Chemical weedkillers and pesticides had obviously been used indiscriminately. The dams on the property were overgrown with invasive aquatic plants. In short, the place was run-down, tired and desperately in need of fresh ideas and energy.”

Possibly the only redeeming factor was the 180° view of the ocean. 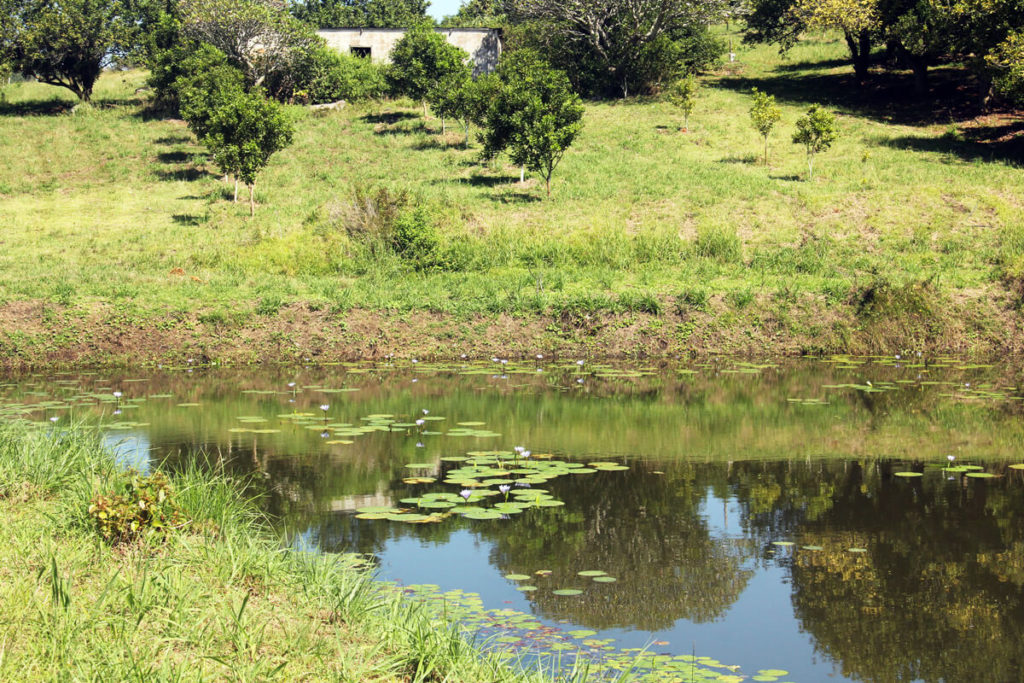 The waterways at the farm were choked with invasive plant species; now after five years of careful natural management, the water is clear, and home to an array of water birds.

The search for the very best in natural farming practices was started swiftly, with the improvement and vital functioning of the soils, reducing the use of chemical fertilisers and pesticides, and replenishing the micro and trace elements in the soil, while cleaning up the dams and waterways was prioritised.

“We started with a microbial-based Plant Growth Accelerator (PGA) that contains no animal by-products like manure. This resulted in a massive increase in the soil bacteria, which helped to improve the fertility of the soils and to feed the plants by producing diverse metabolic by-products that aid healthy growth. Our natural approach to revitalising the farm was all about soil conditioning: helping the plants to increase their chlorophyll production, to increase the uptake of soil nutrients and to become more resistant to soil-borne diseases and drought,” he said. 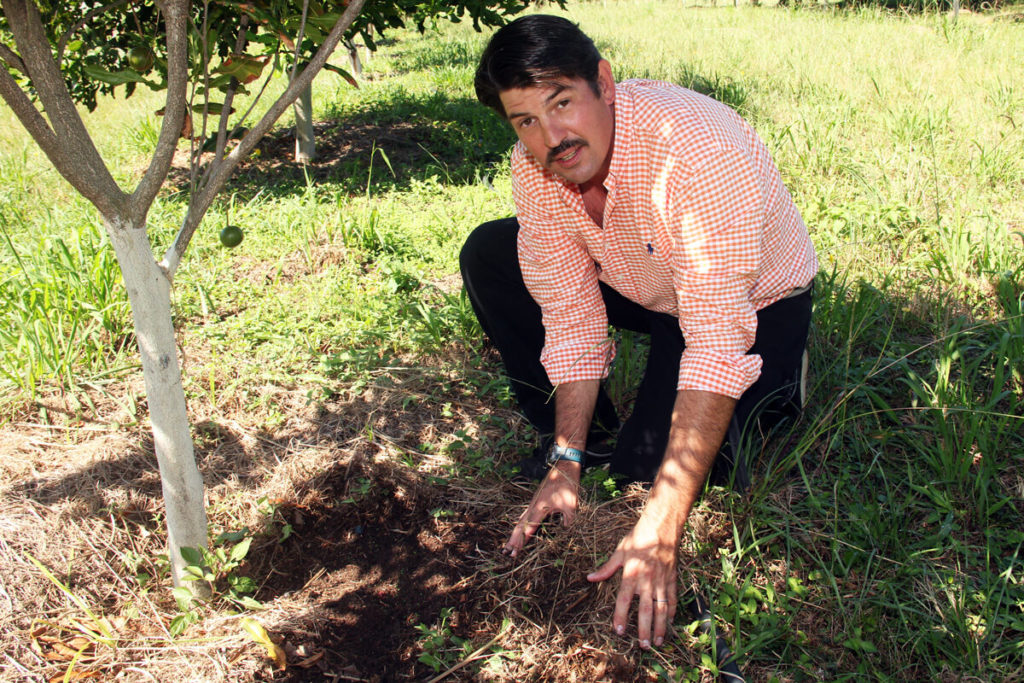 Andrew Doré shows the depth of organic matter under the trees, which is helping to keep the roots cool and moist.

When it came to fertilisers, the plants were treated with a mineral bio-regulator derived from natural volcanic mineral. The mineral has an extraordinary ability to absorb, hold, release and exchange different chemicals, nutrients and toxins, for example ammonia, as required by the plants’ biological systems.

A foliar feed high in trace elements such as silicon, calcium, magnesium, iron, sodium, and manganese was used as a drench, with the product designed for easy penetration through the plants’ cell walls.

“Chemical pesticides and poisons are largely to blame for the way our agricultural environment is so out of balance,” Andrew said. “Spraying for pests is becoming more intense as insects develop higher and higher levels of resistance in a response to the ever-increasing levels of applications.”

As a result, the only treatment applied in the orchards at Villa Doré Agricultural Estate to prevent pest infestations is 100% organic Neem oil.

“Neem oil is being referred to as the wonder organic pesticide. It prevents the insects from eating as well as reproducing and there is no resistance build-up by the pests. The absorption of excess Neem oils is taken up by the roots, resulting in a much healthier plant as well,” he said. 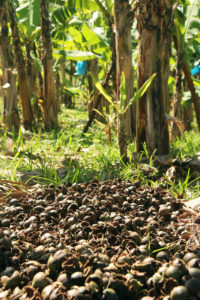 Some of the older banana trees were retained and rejuvenated through applications of natural fertilisers while at the same time regularly receiving loads of mulch and compost, which include the macadamia husks.

A combination of aerobic and anaerobic bacteria was applied to the dams and waterways. The anaerobic bacteria consume the nutrient high sludge by bringing the material to the surface of the water, which then allows for further breakdown by the aerobic bacteria. Five years on and the dams are clear and clean with a large reduction in water-borne pathogens. The well-balanced eco-system was clearly given the thumbs up by a pair of nesting spur-winged geese (Plectropterus gambensis) who gaggled and duck-dived among the sky-blue indigenous water-lilies (Nymphaea nouchali var.caerulea) on the day The Macadamia paid a visit to the farm.

The next step, according to the couple, was the development of the processing factories on-site for the value-add products such as flour and crisps.

“We also renovated – or rather rebuilt – the old farmhouse and established an eco-lodge, which before the Covid-19 pandemic was fully booked every weekend. Next we will start construction of the factories and packaging plant,” Andrew said.

Standing in the five-year old macadamia orchards, where the signs of the first nut crop are starting to appear on trees planted in soils that are rich, soft and malleable underfoot, the couple talked a little about how difficult it was to adjust to the South African culture on their return.

“Japan is the land of convenience and there is a perfectionist approach to everything. If you want to be successful there you cannot compromise on quality or attention to detail, and that is how we are as well. We have come back to nature, but at the same time we are working towards an increased contribution to the economy and community around us by making high quality products for the domestic and export markets.”