Mac trees produce in half the time at Soekmekaar 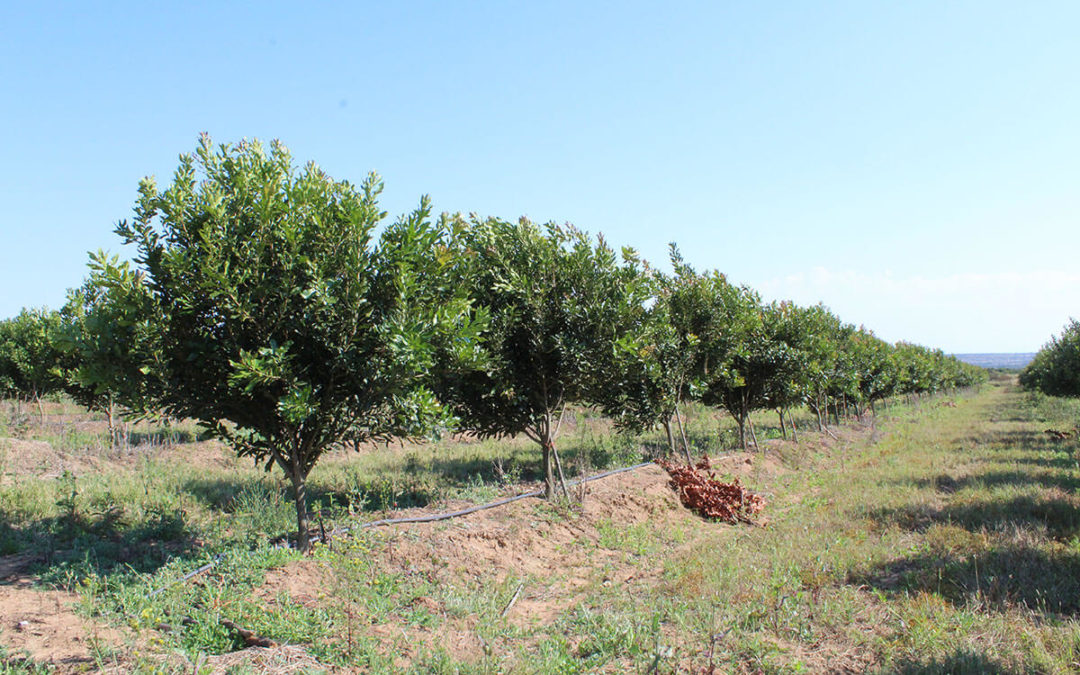 If there were one aspect of the macadamia production process farmers wish they could control, it’s the long wait before the trees start to pay their way.

Rather than wait out the usual four years before his trees were expected to start producing, Limpopo macadamia farmer Werner Basson devised meticulous management methods and carefully timed inputs to bring his two-and-a-half-year-old orchard into production.

By sticking to his guns, driven by his faith and what he called an innate instinct, Basson says he not only planted macadamia trees in what was seemingly an unsuitable area, but against all advice, drilled for and found the water he needed to irrigate his orchard.
And while most would agree it is impossible to get such young trees to start bearing, judging by the health of his orchards there are greater seasons to come.

Nothing ventured, nothing gained

Originally, Basson bought Dewindam Farm at Soekmekaar in 2010 to farm cattle. But one of South Africa’s worst droughts on record a few years later forced the farmer to sell off the herd.
“At that stage I had this idea to plant macadamias. Everyone I shared the idea with told me it would never work. The farm is 1 000m above sea level, whereas most macadamia farmers grow the crop at between 650m and 800m above sea level.

“We were also concerned about how much water was available on the farm, particularly as the average rainfall here is about 650mm a year. I just had this feeling in my gut, though, that it would work, especially since the farm is outside the mist belt,” Basson said.
An experienced and successful farmer with established avocado, litchi and banana orchards in Tzaneen, Basson decided to take the chance. Thirty months later, the farmer is being lauded by industry experts for the health of his orchard and the sizeable crop waiting for harvesting later this month.
“I was quite surprised when my trees were described as ‘looking so good’. I thought the way they looked was just normal,” he said.
He planted the first 10ha of Beaumonts in 2018 and six months later another 30ha. These trees, too, have started bearing. 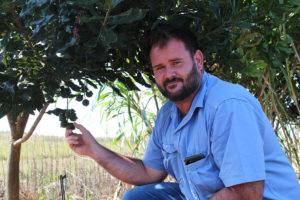 A critical factor for the farm’s success was the availability of water. Despite an existing borehole after the first 30ha were planted, Basson realised he would have to drill a second. This too was high risk as his neighbours had already drilled extensively and had come up short.
“I had a feeling about where we should drill, but the hydrologist thought differently. The night before we had to drill I had a dream about water and kept seeing certain figures. I persevered about where we should drill. After a few metres the hydrologist suggested we move since there was nothing. But I told him to keep going. After another metre we struck gold and the figures I saw in my dream matched the amount of water we found! There is so much water I can now comfortably irrigate the existing 150ha and the additional 100ha I am planning to plant.” 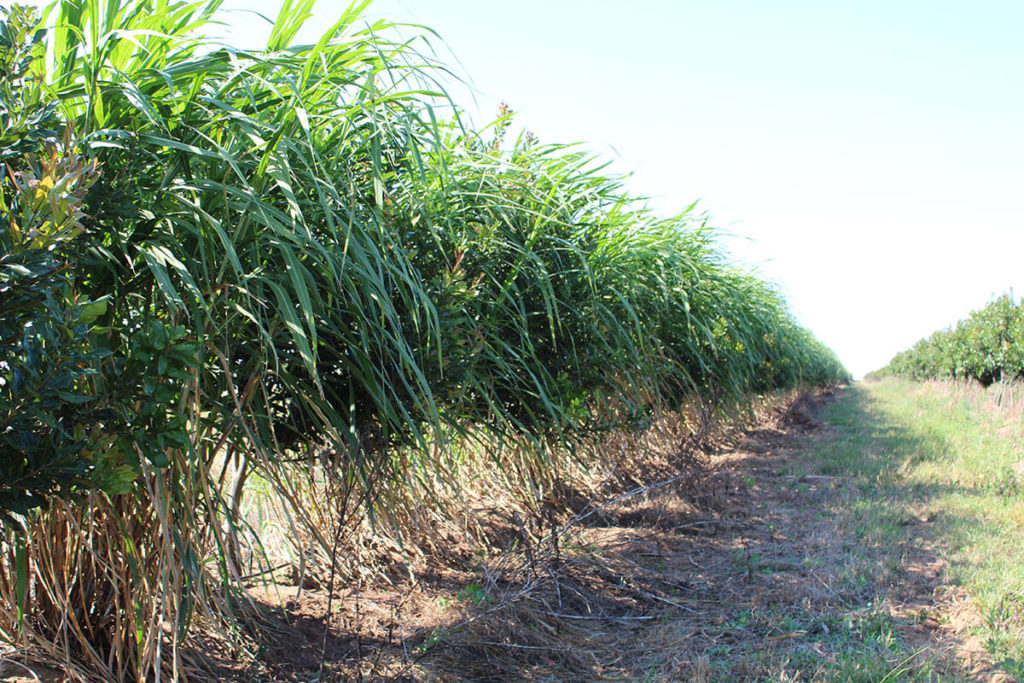 Basson uses 20mm micro irrigation and applies 80 litres of water twice a week, over two hours. The maximum temperatures in summer are about 34°C to 36°C and in winter there are areas on the farm which can measure temperatures below freezing. He said when the cattle were still on the farm he could judge where the frost line began because the water in the animal troughs froze. As a result he has not planted below that line.

The soil types vary, with some sandy soils that are traditionally considered unsuitable for successful macadamia production. 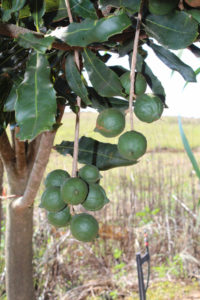 The bunches of nuts on the two-and-a-half-year-old trees are testament to good management and timed inputs.

“I decided to plant in those areas anyway just to see if it would work. If it did I would then be able to utilise so much more of the land. Fortunately my gut feeling was right and I could add 50ha to the 150ha I planted in the red soils. Surprisingly, the trees in the sandy soils are doing even better than those in the red, more clay-like soils,” he said.

Basson started his soil preparation by using a bulldozer to de-forest before cross-ripping the proposed orchard areas.
“I wanted to get the soil as loose as possible so I ripped three times. I then made ridges. The latter was important to create ideal soil moisture conditions. If I didn’t have the ridges and received the amount of rain we had this year, which came in big bursts, my trees would have drowned. So the ridges regulate the soil moisture while at the same time are providing a deep layer of top soil.”

Basson applies lime to the root area of the tree rather than spreading it across the whole orchard.
“When the soil analysis was done post-planting, I knew what I had applied was correct. Most farmers would apply lime across the whole area, which would add up to about three tons a hectare, but I prefer to add it directly to the trees’ roots, which means only 800kg a hectare was required.
“The lime is not wasted where it is not needed. I am very focused on the economics of the business and anything I do must be justified. Ultimately I want to do everything as economically as possible, but also as optimally as possible to get the best result, and I found this practice saved input costs while also providing optimal tree health.”

In the second year, Basson topped up the lime application with an additional 500g for each tree. The soil pH is now at the optimal level of 6.5.
The fertiliser programme was started earlier than what is usual in new orchards, beginning with a low dose before introducing incremental increases.
“Because the roots are susceptible to fertiliser burn I decided to split the total dose recommended for the month into two applications. Then from one year onwards I started applying it once a month after the trees were conditioned to the fertiliser.” 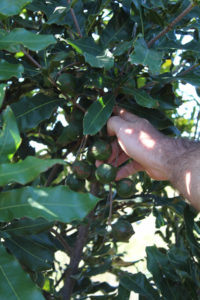 Basson notes the importance of pruning correctly. Where he pruned last year he has been rewarded with bunches of nuts on the new growth points this year.

Basson uses bio-fertigation in the form of Green Liquid and Oasis. The latter is added twice a year and acts as a nutrient-loosening agent promoting up-take by the tree. The rest of the fertiliser programme is worked out according to the soil analysis and applied by hand. Although the orchards are geared for fertigation, Basson said replacement trees, which are usually younger than the rest of those in the orchards, would suffer under the fertiliser programme, which was geared for the larger trees.
“Once these trees catch up, fertigation will be used,” he said.

He said his approach to fertilisation, with the split applications and timing, had benefitted the orchard and he believed it was one of the factors that had led to the early harvest.
“The trees’ roots were always kept in an optimal condition and they never suffered a setback from fertiliser burn. So they could absorb everything I gave them optimally and put it to good use.”

Since Basson was warned the macadamias would not take to the conditions at Soekmekaar, he adjusted his planting density upwards to make up for the expected slower growth. But instead, his trees grew even faster than the norm.
Now at a spacing of seven metres between rows and three and a half metres in row, he said his focus was on pruning, to allow for enough sunlight.
Last year’s pruning regime has indeed borne fruit as Basson pointed out large bunches of nuts hanging on new growth points where the trees were pruned in 2020.
“I am waiting in anticipation to see what the yield will be as we can’t quite do an estimate yet. There are 10ha of the two-and-a-half-year-old trees that are looking really good and a smaller number of the two-year-old trees. Judging by what I am seeing this year, I think next year’s harvest is going to be good.”

One of the challenges the farmer has faced has been the ever-present and steady wind blowing from the east. When he realised his trees were becoming damaged from the incessant wind, he at first planted sugarcane as a quick-growing windbreak.
“I had seen other farmers do it, but cane does not do very well here. So I planted Napier grass instead, which is doing a good job. My plan now is to plant it in every tenth row while the trees I have planted as the long-term solution grow to a good height.”
Basson said his bold plan had presented an unexpected bonus. “There are no other mac farms close to me and so far I have not had to apply any pesticides for stinkbug or nut borer. I did one application for thrips, which solved the problem. I also did an application for plant lice.
“We scouted for stinkbugs and didn’t find any, but just as a precaution we did one application for stinkbugs and nut borer. I suspect the pest load will increase over time, but for now we are all clear.”
And while all the conditions for an optimal harvest are in place, Basson said there still remained a looming challenge. “There is theft everywhere, that’s true. But this farm is isolated so the security costs to protect the crop are going to be very high.”

The attention to detail, the passion, dedication and care taken in developing this novel orchard, seem to be paying off as each tree is heavily laden with nuts.
“We didn’t experience nut drop and the flower drop was minimal. You can see how the nuts are hanging in such big bunches. This tells me I am doing something right. And that is certainly satisfying because so many said what I was doing would never work!”