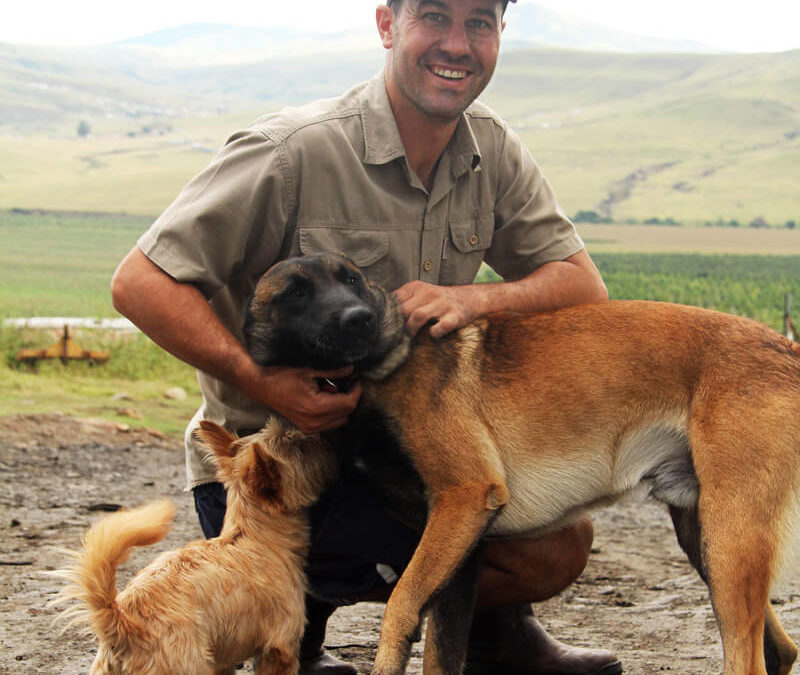 South African farmers are known the world over as resourceful, courageous and generally able to survive and thrive in some of the most challenging of conditions.

On the banks of the uMzimkulu River – which in isiZulu means the home of large waters –young self-confessed “beach bum” Devan Mac Nicol has joined forces with his father-in-law to farm in what has to be one of the most remote macadamia-producing regions in KwaZulu-Natal.

Flanked by the rolling foothills of the uKhahlamba-Drakensberg and overlooking clusters of homesteads in the rural Transkei across the river, Mac Nicol’s in-laws, Meg and John Foster, have farmed at Goodlands Farm for more than 30 years. Their oldest macadamia trees, which are Beaumonts, are now entering their 18th season, with their youngest trees planted up earlier this year.

“Since my wife Candice and I arrived here mid-year, in fact in the middle of the Covid-19 pandemic lockdown last year, I have been busy planting up 35ha of new plantings, installing microjets – as all our crops are under irrigation from the uMzimkulu River, which provides us with water all year-round – and generally learning everything I can about macadamia farming,” Mac Nicol said.

The father of three, who also just happens to be a provincial surfer, like his brother Haydn and sister Caryn, who are also Springbok surfers, says growing up at the renowned Mac Nicol’s Caravan Park at Bazley Beach on the KwaZulu-Natal South Coast meant he not only got to surf every day, but worked alongside his parents learning invaluable skills that are now standing him in excellent stead.

“The caravan park is our family business, so if something needed to be fixed or overhauled, we did it. Whether it was a broken pump or sorting out an electrical or building problem we were hands on,” he said.

And while he admits that conveyor belts used to sort nuts and related farming equipment didn’t quite come into the ambit of his experience at the caravan park, he is fast making the transition.

The recent installation of an upgraded sorting and drying facility on the farm has kept Mac Nicol on his toes as the responsibility of ironing out any hiccups has fallen squarely on his shoulders.

Picking up a toolbox, while taking a call on his mobile phone and followed closely by Rex, the Belgian Malinois shepherd dog, Mac Nicol heads out to the warehouse where the first of the macadamia harvest is being off-loaded for processing.

Taking the phone from his ear he points to a newly painted homestead, as neat as a new pin. “I have also built our new house,” he says. 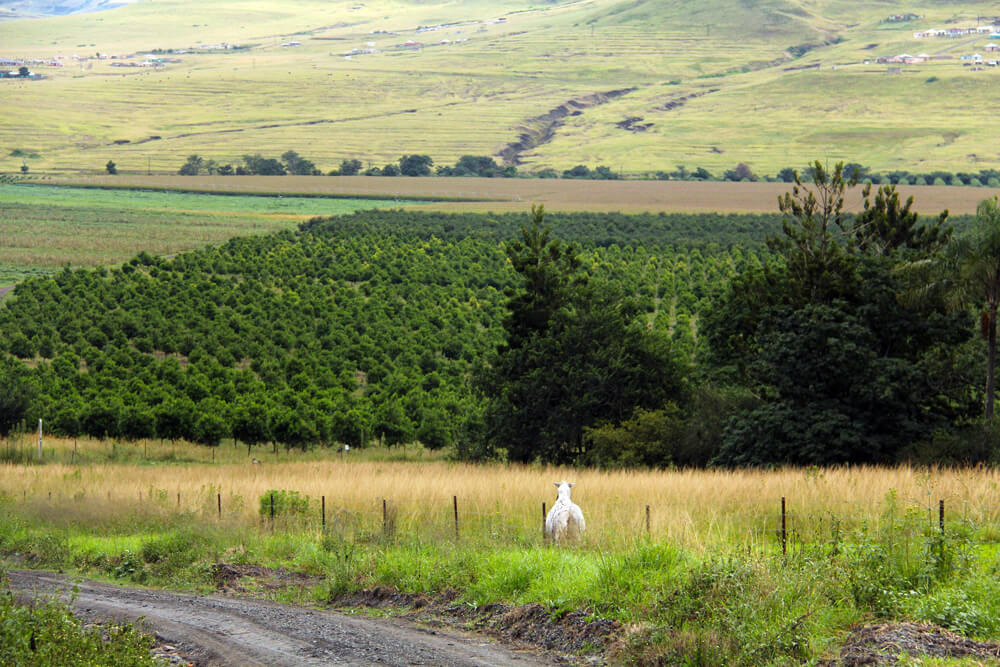 With 90ha now under macadamia trees and 35ha under cash crops such as potatoes and cabbages, John Foster said he and Meg were attracted to the land in 1989 because of the valley climate, rich soils and abundant supply of water.

“Just 10km from here the conditions are very different. Farms get blanketed in snow or frost during the winter whereas we are very much a more coastal or hot riverine climate,” he said.

When asked why he had the foresight to plant macadamias, Foster replied it was at the advice of the “father of Beaumonts”, Len Hobson. “I don’t believe it was anything clever that we did, but yes, it has worked out well for us.”

Mayo Macs Technical Services Manager in KwaZulu-Natal Andrew Sheard said while macadamia trees were recently planted in Hilton outside Pietermaritzburg, he believed the Foster orchards were “pretty close” to being the furthest inland in the province.

“They get surprisingly very little frost damage compared with some of their neighbours a bit further down from them,” Sheard said.

Mac Nicol said precautions were taken, however, to protect young trees from any potential frost damage.

“We spray the trees with a kaolin-clay-based product called Screen Duo. Last year we also used Frostguard – a very light cloth which we wrap around the stems to prevent freezing of the main stem. If the main stem freezes it leads to the cells bursting and then the bark splits. The same product is also used in the shape of a square tent, which is then placed over the young trees,” he said.

On the land preparation ahead of the most recent plantings, which included A4 and 816 varieties, Sheard said they had applied lime to correct the soil pH and mainly acid saturation of the Willowbrook, Inhoek and Katspruits soils, at a ratio of calcium/magnesium/potassium to hydrogen and AI ions. 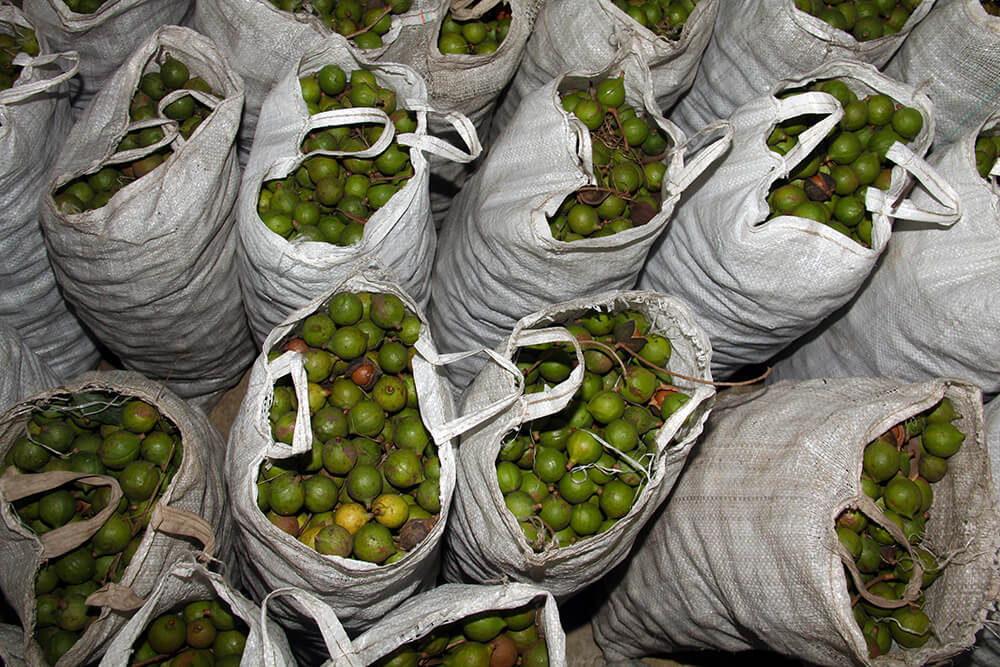 “We also applied gypsum to increase the calcium/magnesium ratio to improve the soil structure as they also have quite high magnesium and potassium levels in the soil,” he added.

The young trees, which all came in 7 litre bags, were supplied by renowned nurseryman Bruce Pepworth who runs one of the oldest macadamia tree nurseries in the province. “We have been supplying mainly A4, Nelmac2, A16, 816, 863 and Beaumonts to the industry for about 20 years,” Pepworth said.

“We supply bigger trees, which were ideal for the conditions at Goodlands Farm because there are two things macadamia trees really don’t like and that’s wind and frost. We are also seeing quite large plantings in the Hilton and greater KwaZulu-Natal Midlands areas, where frost can be a problem, but with the right protection those growers should get reasonable crack-outs. The soils are very good there.” 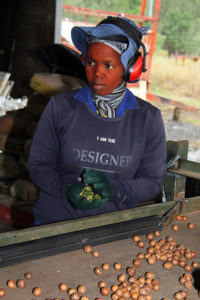 Irricheck’s Tim Hulley, who visits the farm regularly to catch up on how the Irricheck Pulse irrigation scheduling has performed and to discuss the programme for the months ahead, said understanding how the variable soils behaved was critical for effective water-use.

“The soils range from heavy clays to very sandy soils. But by understanding how these different soils behave and where they are geographically, we can then use the capacitance probe to manage them efficiently,” Hulley said.

The use of mulch under the trees was also an aspect that he said he could not emphasise enough. “Mulch, mulch, mulch! If farmers do this effectively, evaporation from the soil surface is decreased, the soil temperature remains stable, water infiltration is increased, and it cuts the weed-load.”

Aquacheck Probes combined with the Gentick Telemetry system are employed in the Goodlands Farm orchards. “We like to use these two products because the former carried a five-year warranty, and the latter is highly reliable and gives us an option to plug in different sensors. This gives us options to meet each farmer’s needs.” 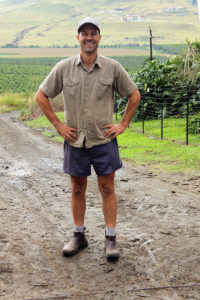 Hulley said Mac Nicol’s daily attention to the irrigation systems was also key for success. “He checks the system regularly to make sure it is running at the correct pressure and is delivering the correct volume through each nozzle.”

Mac Nicol said consulting experts for success was absolutely critical to their progress. “We also regularly consult Rian Brummer from Agri Technovations, who has helped us with soil sampling, and Bruce Humphrey from Farmers Agri-Care, whose invaluable wisdom is helping us with our integrated pest management programme and yield management.”

Looking out from the top of the driveway, the dark green of the macadamia trees spreads across the valley below; a grey horse – way past his prime – dozes in the afternoon sunshine. All is at peace!

But not so long ago, an attack on a neighbouring farmer had the community on edge.

“Yes, security is sometimes an issue. But we are aware, and we do take precautions. This is a remote little valley, and any major towns are at least two hours from us either way. We are also a very close community,” Mac Nicol said.

And on the small matter of getting back to the ocean to surf, Mac Nicol was unfazed. “I get down there as often as I can. Perhaps one day we will be able to expand our operation and get closer to the ocean, but for now our priority is that elusive big goal: achieving 100 tons nut-in-shell.”