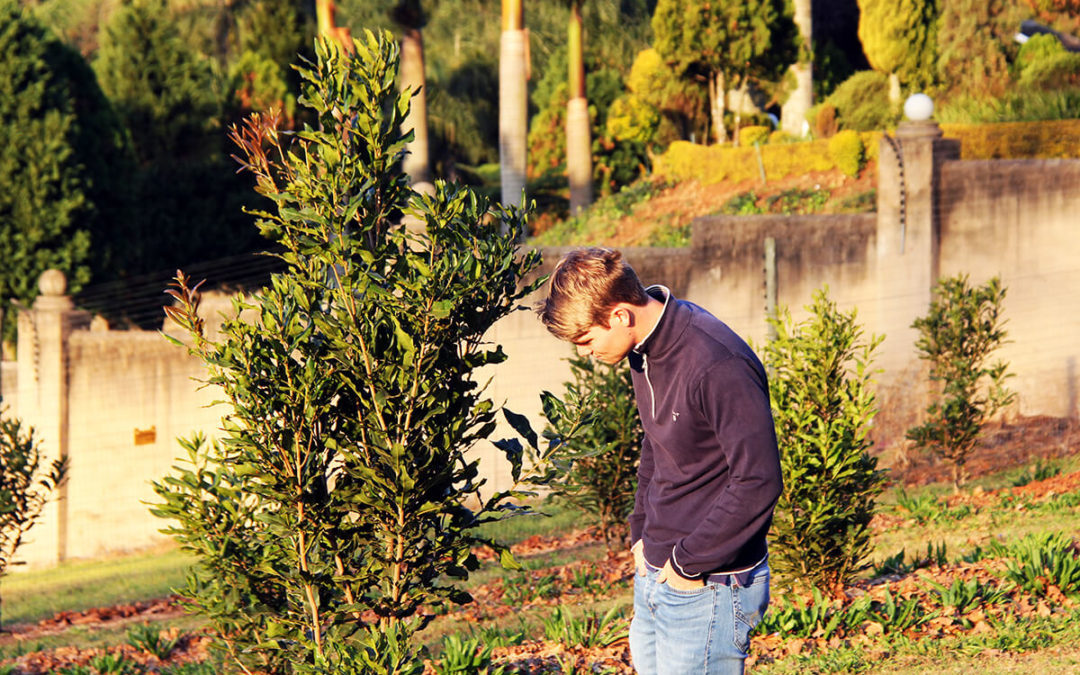 George Rowles Jnr examines one of the newly planted A4s in the Eldorado Farm orchard outside Hillcrest, near Durban.

While some may have baked bread or adopted a dog during the Covid-19 lockdown in 2020, the Rowles family chose rather to establish a 500-tree macadamia orchard on their 20ha farm in Durban’s outer west. And all in the name of love!

Along the busy double-lane highway between Hillcrest and Waterfall, where gated housing developments have burgeoned following the migration from Durban’s inner city about 25km away, lies what was once a thriving sugarcane farm and racehorse training facility, titled Eldorado Farm.

Now the racetrack is covered in grass and its memory evoked only by mole rats that push up pale heaps of sand once regularly applied to cushion the flying hooves of the more than 50 thoroughbreds once housed in the now bolted and silent rows of stabling. 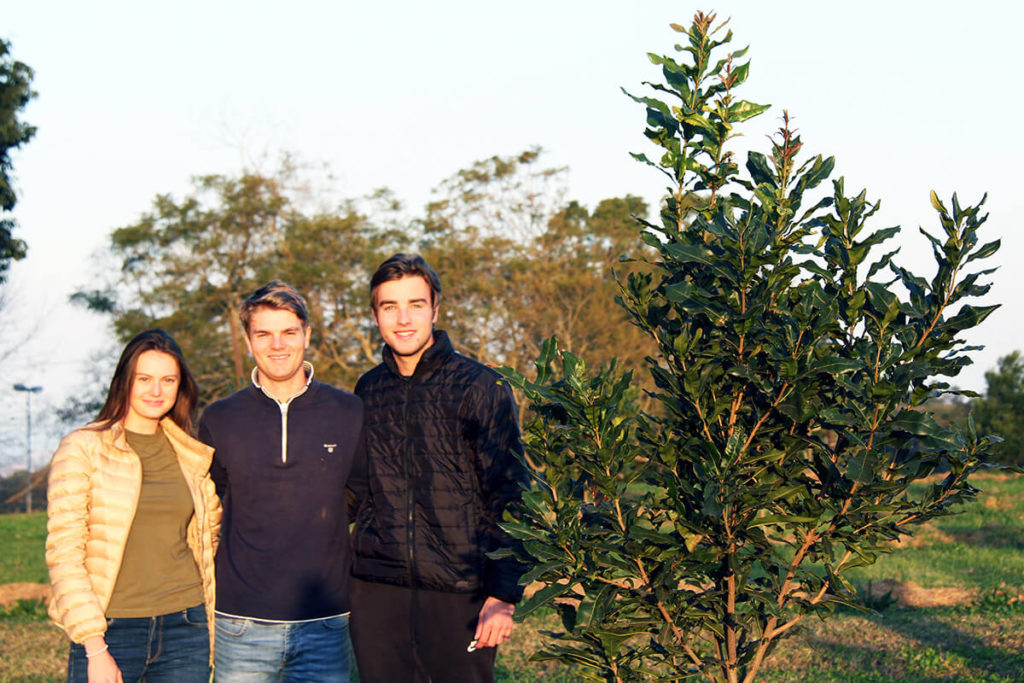 From left, Tiffany Davidson, with brothers George and Harry Rowles in the orchard of Beaumonts, which were planted during the Covid-19 lockdown last year.

For the newly-planted macadamia trees, however, the memory of the grazing horses can be seen in their bright green shoots, their growth fed by fresh horse manure applied naturally and daily for more than 50 years, resulting in the long-term enrichment of the dark Inanda and Kranskop form soils.

Since the death of the family patriarch George Rowles, the pristine property has been under the care of the horseman’s son, Dave Rowles, his wife Nicky and their children, George, James, Kate and Harry.

“The farm has been in our family more than half a century,” says George Rowles Jnr.

“Since my grandpa passed away about three years ago the farm has remained dormant. The idea to plant macadamia trees came along during lockdown. My girlfriend, Tiffany Davidson’s dad, William, farms macadamias near Mtubatuba in northern KwaZulu-Natal. To allow me to travel to see Tiffany during the lockdown, William appointed me as a farm supervisor and signed a travel permit for me. One day when I was returning home to Hillcrest, he loaded up a few young trees saying if I were stopped along the way at least I could show the trees to the authorities as proof of the authenticity of my permit!” 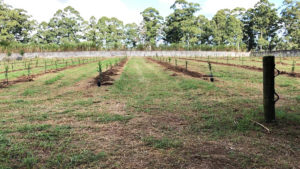 BEFORE: In the year since planting, the trees at Eldorado Farm have grown exponentially due to the rich and fertile soils. 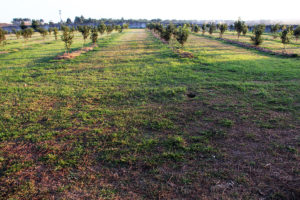 AFTER: In the year since planting, the trees at Eldorado Farm have grown exponentially due to the rich and fertile soils.

From planting these few trees, the idea of the 500-tree orchard was born.

Davidson supplied the family with Beaumonts and A4s from his nursery and the family got to work. “We are doing this all ourselves. The whole family is involved. My mom drives the tractor, James, Kate, Harry, and I then water the trees with buckets from a JoJo tank which we slide on to a trailer. And, because the soil is so rich and the climate so perfect for growing the trees, we haven’t had to install any irrigation or apply any fertilisers or pesticides,” George said.

Living at home and employed as an insurance representative at Kayser Baird Insurance Brokers in the nearby suburb of Kloof, the BA Hons graduate says he checks on the trees daily. 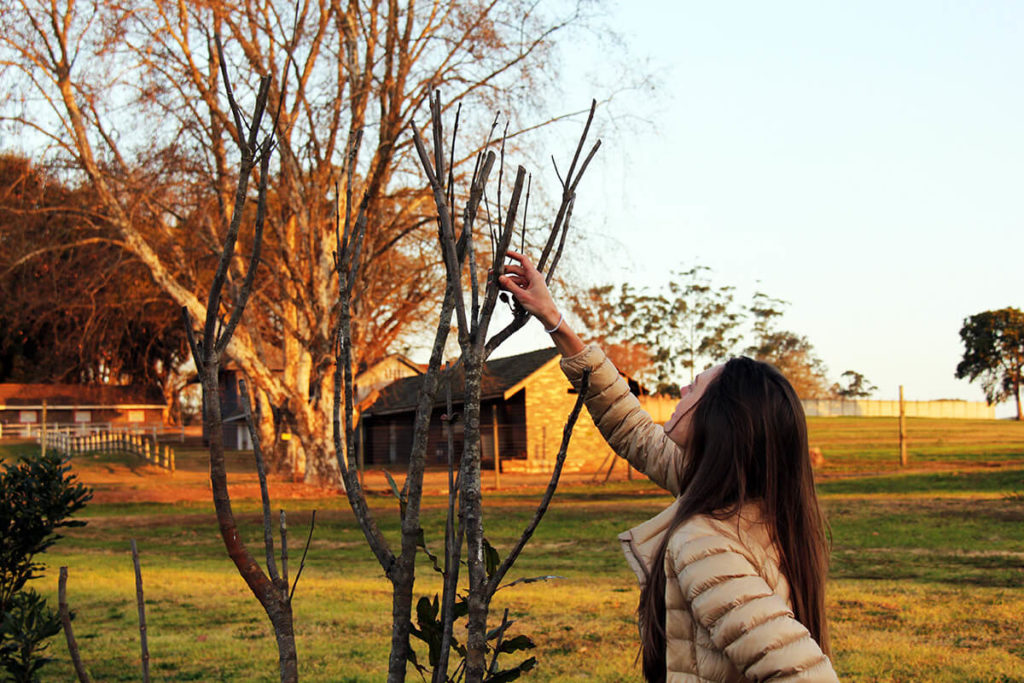 An unidentified wild macadamia tree found growing on the property has been planted and has started to bud. Tiffany Davidson examines the small buds on the unusual variety.

“The first batch of trees was planted in May 2020. They were all Beaumonts apart from one row of A4s. The second batch were planted in December 2020. They are all A4s. The most enjoyable aspect of this project has been learning as we go, discovering new ways to grow and look after the trees and then as a family, working so well as a team. We knew nothing at the beginning, but now we understand and appreciate the hard work that goes into developing an orchard,” he said.

The mentorship provided generously by Davidson was vital to their growing success, he adds. “William has vast knowledge and expertise. His willingness to help us whenever he could has made the process seem easy.” 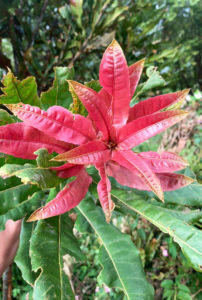 The one downside of the picturesque gentleman’s estate, however, is the roaring south-easter, which rips across the pristinely-mown fields of Kikuyu grass. “My dad is a property developer, so he likes things to be very neat and clean. He wasn’t keen on us planting rows of Napier fodder or casuarina trees between the young trees, but if I had to do this again, I would plant wind breaks between the rows for sure. Where the trees are better protected at the bottom half of the property, they have grown markedly bigger than those in the teeth of the gale.”

Another valuable lesson was giving the trees too much in the way of tender, loving, care. “We visit the orchards daily and when we do you will find us nipping the new buds, almost unthinkingly. This has made some of the trees, particularly those closest to the entrance to the orchards, a little top heavy, although they are also nice and bushy. Because of this some of the trees have failed to develop a good base, which resulted in about five to ten of them being snapped in the wind,” he said.

“I would also apply mulch straight after planting to make sure the weeds and the grass don’t engulf the newly planted trees. We found ourselves having to water more regularly, as well as having to weed much more. Mulching has also created a much healthier micro-climate and has helped to retain the moisture around the trees. In fact, I have to say applying mulch has proven to be a game changer for our orchard,” George said. 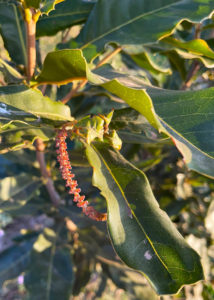 After just 14 months in the ground, the Beaumonts at Eldorado Farm are producing racemes.

When the trees were planted the brothers added horse manure from a pile that had been “sitting” for about seven years. “We also had several bags of bone meal just lying around. We extracted the manure using a Bobcat, mixed it with the bone meal and applied two spades to each tree as we planted. The three of us believe that it’s this mixture that has given us a competitive advantage,” George laughed.

And with the year-old trees already flowering as the weather begins to warm and the sun returns to the southern skies, the brothers admitted they had yet to figure out how the nuts were to be processed. “William told us we could cross that bridge when we get to it,” they said.