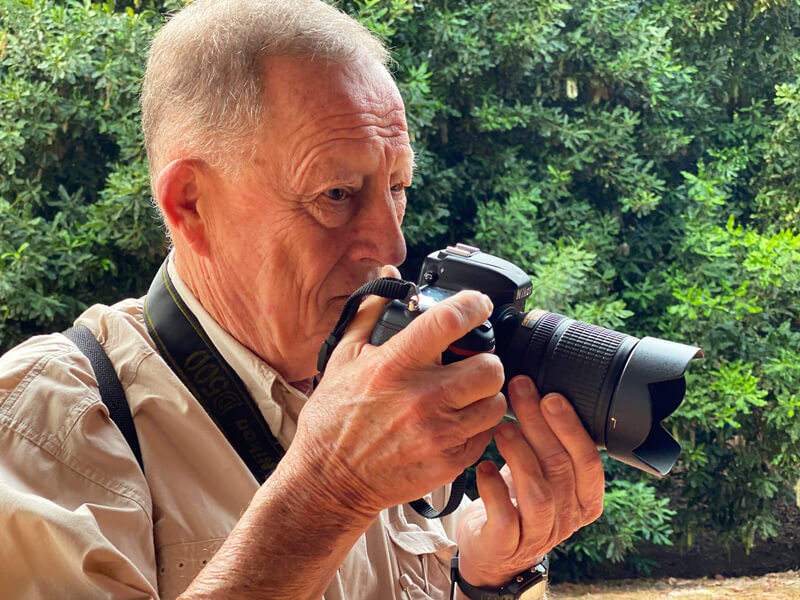 Habitat analyst Ben Breedlove is calling on the macadamia sector to research the presence and efficacy of single pollinators after his own extensive enquiry, showing the trees are probably more effectively pollinated by a moth, and at night.

Breedlove, who specialises in the optimal functioning of habitats at scale, says both historical and anecdotal evidence points to single or non-honeybee pollinators as the most effective on the trees.

“Macadamia trees are indigenous to the north-eastern coastal interior of the Queensland state in Australia. The honeybee is not native to that country, although a stingless bee species (Tetragonula carbonaria) is. This bee is social and does produce a type of honey, but is much smaller than the African honeybee and is now being used at scale by Australian macadamia farmers to pollinate their trees. What concerns me however, is because honeybees – particularly in South Africa – have been used historically to pollinate crops it seems no thorough investigation has been conducted into the importance of alternative pollinators to the health of the environment and the orchards in this country,” he said.

The macadamia is a member of the Proteaceae or protea plant family, with species native to both South Africa and Australia. In both countries the plants are served by bees, flies, beetles, moths, rodents, bats and sunbirds, among others.

Responding to a query from The Macadamia, Denise Bond, executive officer of Australia’s Macadamia Conservation Trust, said while introduced European bees were thought to play a big role in that country’s orchards they were, in fact, too big to pollinate the flowers as designed. “They do seem to do a good job just by bumbling around collecting pollen and then spreading it around. Our native bees, which are stingless and believed to be a significant macadamia pollinator, are much smaller than the African or European bees,” Bond said. 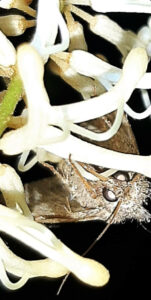 Following an informal discussion on the side lines of the South African Bee Industry Organisation in Mpumalanga between farmers and Ben Breedlove, one of the farmers took this picture of a moth pollinating macadamia flowers at night in his orchard.

She agreed that the debate around the efficacy of bee pollinators alone was not conclusive.

“Globally, crop farmers rely on honeybees as prime pollinators in artificial agri-ecosystems as they can be managed and manipulated to fit requirements. Also the macadamia flowering season and the seasonal evidence of natural pollinators overlap for a very limited time at the very end of the flowering period, as almost all natural pollinators hibernate,” Du Toit said.

Breedlove’s research was important, he added.

“He should continue to explore and follow his gut because that is what science is all about and eventually we will hopefully have a more complete understanding of the macadamia crop and its pollinator interaction.”

Breedlove contends that as the macadamia flower is most fragrant at night, nocturnal pollinators were critical for good yields. “Fragrance is a signal given out by a plant to attract appropriate pollinators, which means macadamia flowers are pollinated at night and specifically by a species of moth. In South Africa we have more than 1 300 bee species according to experts, and somewhere between seven to ten times as many moth species. But, it seems, we know very little about the moths. What we also know is that many of the protea species’ pollinators operate at night, for example, bats, rodents and of course, moths, but in South Africa, farmers protect the honeybee by spraying at night, which could have devastating effects on these critical populations of pollinators,” he said.

He said it was also a well-known fact that bats ate stinkbugs. “But we spray at night ‘to protect the honeybee’. We do this knowing full well how difficult it is to put the spray where the stinkbugs occur primarily. Wouldn’t it be much simpler and way more productive to encourage the nocturnal pollinators and predators and as result, lower the pesticide load in our orchards? Why don’t beekeepers block the hives for 24 hours to allow the farmers to spray during the day?” he said.

However, the answer was not that simple, said Green Farms Nut Company Group Agricultural Technical Manager Barry Christie. “Night spraying is recommended at the moment partly because bees are not active at night. But what is optimal – and we actively encourage this – is not to spray at all when there are flowers in the orchards, and that includes weed or cover crop flowers.”

Christie said there were other important reasons to spray at night, which had little to do with the protection of bee colonies. These included less evaporation, less ultraviolet light and lower temperatures, which all increased the efficacy of both chemical and biological products. “If nocturnal insects are indeed important pollinators on the macadamia trees it would really complicate matters, and that is why we need thorough research to clarify this matter,” he said.

As someone who travelled the 4 000km round trip to attend all of the South African Beekeeper Organisation (SABIO) events recently held in the Eastern Cape, KwaZulu-Natal and Mpumalanga, Breedlove said notably absent during the drive were the “insect splats” on his windscreen.

“Monoculture guarantees maximum potential for pests to thrive while little operating space is provided for the beneficial insects and mammals, and we have poor and inadequate data on nocturnal pollinators in the macadamia industry. Records do show that 47 species of moths are associated with the Proteaceae and eight species of moths, for which Macadamia integrifolia acts as a host plant. I have no doubt more could be found and their services to the tree better determined,” Breedlove said.

Referring to the North American apple-growing industry, which has turned to a more cross-section of native pollinators for their crop due to the decline in commercial bee swarms, Breedlove called for intensive research. “Among our protea pollinators there are probably several good candidates for macadamia pollination. They might be suited for incorporation using intercropping or orchard-edge management where we emphasise plant species that build suitable populations for macadamia pollination beginning before flowering and lasting until well after the macadamia harvest. This ensures there are adequate offspring to serve as the next year’s pollinators. We will then get increasingly improved production because of a healthy mix of pollinators in the orchards,” he said.