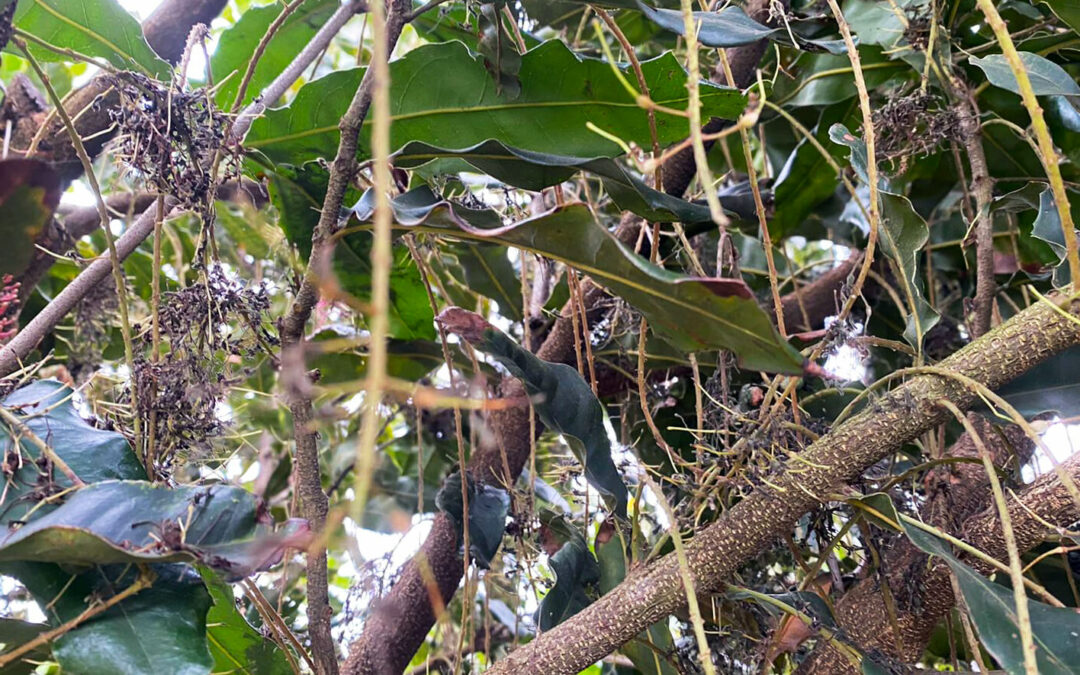 As macadamia farmers in southern KwaZulu-Natal are left counting the cost of the unprecedented rainfall last month followed by a more than 40°C heatwave, experts say blight is costing the industry up to 30% in yield losses in affected orchards.

KwaZulu-Natal South Coast macadamia farmer Matt Flanagan said between 100mm and 200mm of rain was measured in the area over a seven-day period, followed a week later by one of the hottest days on record at 40°C, which caused some nuts to abort.

“I have never seen blight so widespread between the coast and inland before. It is usually in isolated orchards where growers failed to use preventative spraying or where pruning has been an issue,” Flanagan said.

Late blooming Beaumonts, A4s and some 788s were the most affected varieties as the rain fell in the “meat of their development”.

Flanagan said some farmers were devastated. “We were having an exceptional start to the season before this. But I guess we must take the good with the bad. We are still better off for the rain,” he said.

Karen Carlton-Shields from Fairview Farm, also in the southern inland region of the province, said that as the Beaumont trees were quite dense, the blight was widespread in their orchards. “Because we are still harvesting we are not able to spray anything to protect the flowers, due to the withholding periods for the chemicals,” she said.

Operations Director at Mac-Eden Estates Stellio Poriazis said once the first signs of blight were found by the farm’s scouting team he applied a copper-containing suspension concentrate fungicide and bactericide.

“That worked for us, and we don’t seem to have had any follow up husk rot – which we expect after the unprecedented heat, but to be honest, I tend to ignore any aspects such as these in the orchards until December or January, as we are so busy harvesting now and many of the trees are flowering. We won’t really know about the extent of any damage until the end of this year or in January. If we find anything then we will block spray. We usually use the Bellis® fungicide,” Poriazis said.

In a study titled Molecular methods for the detection and quantification of Pestalotiopsis and Neopestalotiopsis inoculum associated with macadamia, authors Kandeeparoopan Prasannath, Victor Galea and Olufemi Akinsanmi say a lack of information on pathogen biology and disease epidemiology, including the timing of infection and the conditions necessary for disease development, have hampered effective control of dry flower disease (or blight) in macadamia orchards in both South Africa and Australia.

“Typically, growers apply protective fungicides as prophylactic sprays or at the commencement of symptoms, which often results in poor disease control,” they say. 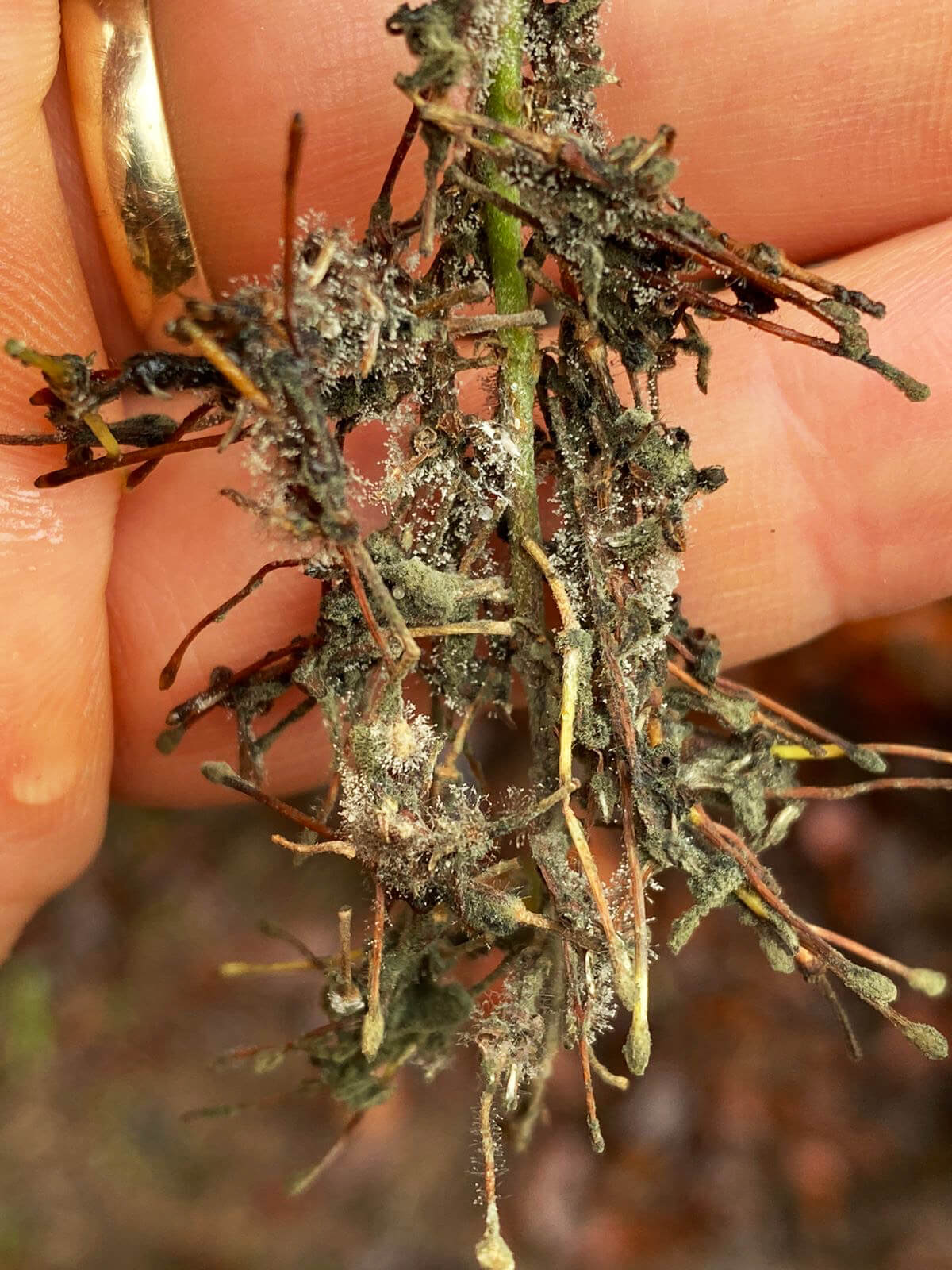 Ideally, and this is supported by South Africa’s Macadamia Association (SAMAC) Research Extension Manager Schalk Schoeman, a predictive tool for determining the temporal dynamics of the disease inoculum during flowering and the rapid identification and quantification of the windborne conidia would help determine the sources and seasonal dynamics and help reduce the chemical load in orchards, allowing farmers to get ahead of the game.

But such a tool has yet to be found and while research is under way by SAMAC scientists, the advice Schoeman is giving farmers until a solution is found is to keep an eye on long term weather predictions during cold fronts, although weather patterns are becoming more and more difficult to predict.

“At the moment we are urging farmers to look at long term weather predictions during flowering and to spray if cold fronts, with the potential for rain, are imminent, as it is often very difficult to eliminate the fungus once the infection has taken place,” Schoeman said.

Research methodology by University of Queensland scientists to detect airborne conidia of the Pestalotiopsis and Neopestalotiopsis species.

These are a genus of ascomycete fungi and known as plant pathogens.

Conidia produced by these pathogens are mostly dispersed by wind and rain splash and are the primary infecting propagules. Rapid detection and quantification of airborne conidia are essential to determine the seasonal dynamics of inoculum and critical infection periods in the macadamia orchards.

In the research undertaken by Kandeeparoopan Prasannath, Victor Galea and Olufemi Akinsanmi from the Centre for Horticultural Science, Queensland Alliance for Agriculture and Food Innovation at the University of Queensland, Australia, a quantitative Polymerase Chain Reaction (qPCR) using a new primer pair and a hydrolysis probe was developed to detect and quantify airborne conidia of (the) Pestalotiopsis and Neopestalotiopsis species. The amplification efficiency of the qPCR was 96.4% and the assay had a limit of detection of 400 fg of Pestalotiopsis/Neopestalotiopsis gDNA, which corresponds to approximately 10 conidia. The qPCR assay coupled with spore trapping was used to monitor airborne conidia dispersal under field conditions. The results showed that the assay is specific and sensitive for detecting and quantifying Pestalotiopsis/Neopestalotiopsis conidia in macadamia orchards. The detection and quantification of the pathogen inoculum, the scientists say, will improve (the) understanding of disease epidemiology and the ability to manage these diseases in the macadamia sector.