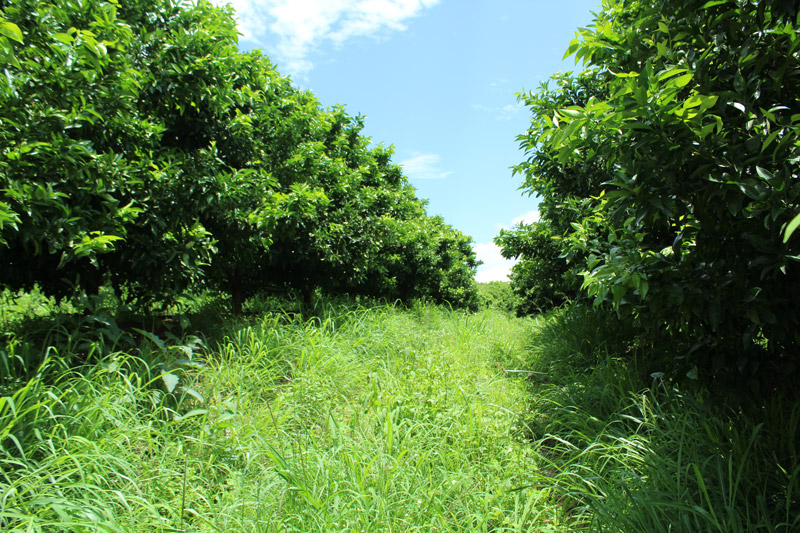 Cultivating a crop that is still in its infancy, compared with other extensively researched crops such as citrus, requires a period of trial and error to find what offers the best on-farm outcomes.

Ridging has made its appearance in orchards as farmers realise the benefits of adding an extra layer of topsoil.

While these three practices are often implemented intermittently, research is emerging that suggests the combination of all three offers the greatest benefit.

Netafim agronomist Jovan Erasmus believes a strong root system is required for trees to reach their optimum potential. “This means the soil must allow these roots to develop, without hindering growth. Soil structure is therefore an important consideration, and one that is influenced by multiple factors, including irrigation, wheel traffic and soil cover,” he said.

“Ridges are proving to be far more beneficial than initially thought, since they not only provide a large layer of topsoil, but traffic is forced to stay in the middle of the inter-row and away from the area directly under the tree where the roots are.”

Just outside Nelspruit, Mpumalanga, macadamia farmer Martin de Kock has experienced the benefits of ridging. While this was initially done because of the shallow topsoil on his farm, he has now seen additional benefits.

“It also keeps wheel traffic away from the tree trunk and the roots, preventing compaction. By adding ridges, I’ve exposed the roots to nutrients and water up to 60cm in depth, whereas if there were no ridging, the nutrients would reach only 30cm of the roots.” 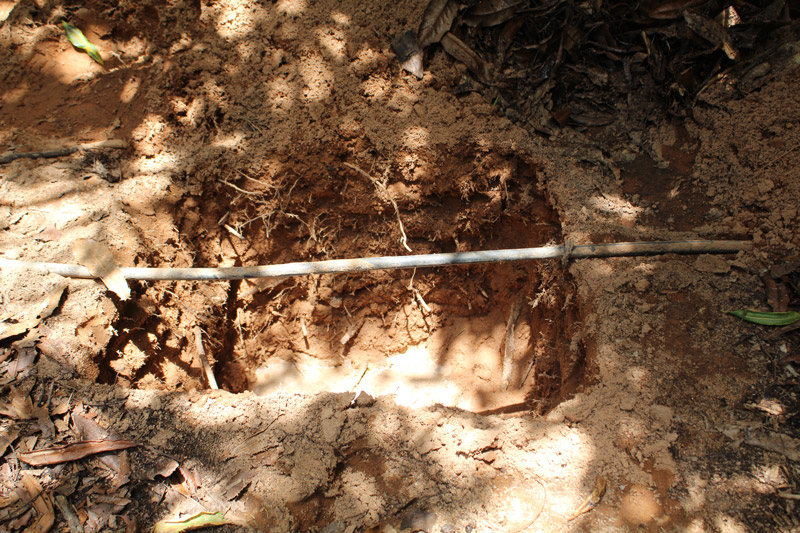 A profile hole should be dug to determine if the water is flowing properly through the soil.

Michael Esmeraldo, regional agronomy manager at Netafim in Nelspruit, explained that in orchards he visited, there was a big difference in tree quality between those that ridged and those that didn’t.

“Roots are far more developed when trees are planted on ridges. It also appears that trees grow much faster in the early years, and they start producing earlier. This is because water and nutrient management is more optimal, so the trees get what they need through properly developed root systems and well managed soils.”

He added that the practice has many other benefits: “There is better drainage so the trees don’t have wet feet, which can lead to phytophthora. You have more control over fertigation applications, and if you fertigate, you can keep those nutrients in that broad layer of soil for longer, which gives the roots maximum time to extract what they need.”

Esmeraldo said while the initial financial cost of ridging was a deterrent for some farmers, just an additional 300kg of macadamia nuts would pay for the hectare’s ridging.

“Considering that yields are better with ridging, you will pay for the extra cost in no time.”

Erasmus noted the positive effect cover crops have on soil structure and reducing compaction in the orchards. This practice also serves as a temperature regulator. “A thick layer of mulch keeps the soil temperatures cooler in the warmer months, preventing root burn. It also shields the finer roots from the cold in winter. This means conditions are optimal for the roots to keep growing, allowing for optimal uptake of nutrients and tree health.”

De Kock therefore allows the natural grasses on the farm to grow between the rows of trees. He said that although this was a big mind shift, the moisture probes told a compelling story. “The soil temperature stays cooler where the grass is long and so I can irrigate less as evaporation is reduced. “The question that I am always asked is what quantity of my nutrients is being stolen by the grass, and the answer is that it doesn’t matter. Studies show it’s between 4% and 7%, which is negligible. I gain a green mulch that builds carbon in the soil and I irrigate 40% less in the orchards where there is proper ground cover with grass.”

In managing the cover crops, a side mulcher should be used to place mown green matter under tree trunks, without having to drive over the root zone. This is done just before the harvesting season to allow easier access into the orchards. 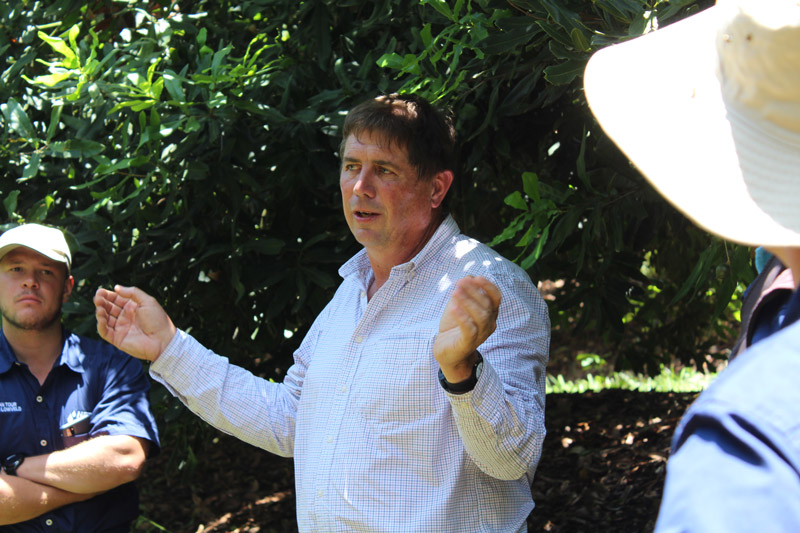 Understanding the way in which water flows through the orchard is a crucial step in determining irrigation schedules. Esmeraldo suggested farmers dig a profile hole one metre from the dripper line, in and between the rows to see how the water moves through the soil.

“You want to ensure that you wet all the roots, because the more roots that are fertigated, the better the tree will grow. We divide the root zone in two: the active zone and the buffer zone and manage them accordingly. If the roots grow up to a metre, then you must irrigate up to 60cm every day, and then once a week wet up to a metre on a longer irrigation cycle. This is how you manage the irrigation to ensure that the roots are irrigated sufficiently but that they also get enough oxygen.

“The profile hole will give you a good indication of how long it takes to wet the root zone to a 60cm depth. This will then determine how long your pulse length should be. If it takes three hours to get to 60cm then you know you should not irrigate longer than this or you will leach the soil.”

He said low flow drip irrigation has been found to be the most effective irrigation method for trees in an orchard. This also resulted in a 30% water saving. Water and fertiliser are applied directly to the root zone with minimal wastage, and because water levels are well managed, load-shedding does not have an adverse impact on the trees. The system does not require a lot of electricity to push out large volumes of water that would be required with other systems, which means not only a cost saving, but the whole farm can be irrigated at once.

“Simulating the ideal balance between soil, water, nutrients, and oxygen throughout the sunlight hours of the day will maximise productivity of the tree.” 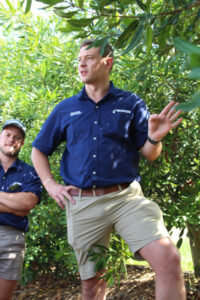 However, Esmeraldo cautioned farmers not to over-irrigate orchards. “With this system, farmers might be inclined to want to irrigate more because they are not necessarily seeing the water in the orchards. But if the water is running out of the ridges it means nutrients are being leached. This system is designed to give the tree exactly the amount it needs, so there shouldn’t be any water pooling up. We are also starting to realise that macadamia trees need far less water than initially thought.”

De Kock bases his irrigation schedule on readings from the on-farm weather station and moisture probes. He adjusts his irrigation every three days according to the soil’s needs, based on these readings.

“This does not take the physiological stage of the tree into account, so I need to consider this too to ensure the trees get what they need for their stage of growth.

“Relying on a soil probe can also be problematic since the readings are very much dependent on where the probes are placed. Knowing the transpiration rate based on the age of the trees and the canopy size, it is far easier to irrigate accurately and eliminate any vast fluctuations.”

Flow metres are in place on all the irrigation lines on De Kock’s farm, which alerts him to any irrigation problems.

“The design of the whole system is important because it can not only alert you to problems, but easily identify where the problems are. Because the irrigation is divided into smaller blocks of one or two hectares, each with its own mother line from the pumphouse, if there is a problem I know where to fix it. So not being able to physically see the water being sprayed in the orchards is not a problem.”

De Kock applies fertiliser with every irrigation cycle and each tree receives 1.6mm per day. “It’s not a lot of water, but it is possible because of the low flow drip irrigation system and the way in which it evenly distributes water.”

Going one step further, he has implemented sub-surface drip irrigation. He said that this keeps the pipes cooler, meaning that the first water emerging from the pipes is not overly hot, as it would be if the pipes were lying in the sun. This hot water would then burn the finer hair roots growing close to the surface. The fact that the pipes are buried also means rodents don’t chew the pipes.

Since implementing the low flow drip irrigation, ridges, and cover crops, De Kock has seen the health of his orchards improve, with trees bearing nuts at a far younger age. “I am reaping the rewards of this system,” he said.