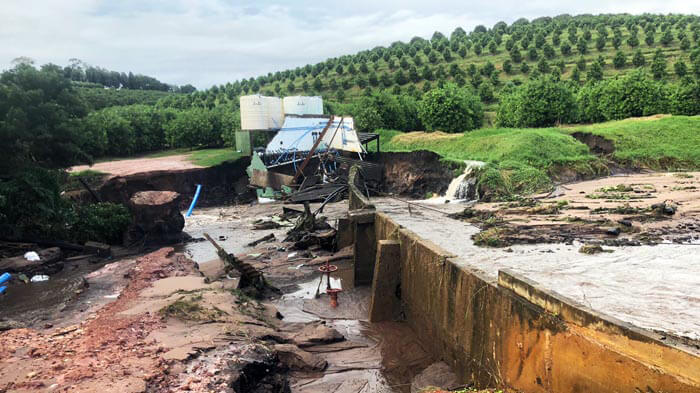 With some of the highest rainfall averages ever recorded for the months of April and May in South Africa’s KwaZulu-Natal province, macadamia farmers are saying the impact of the resultant flooding is varied.

Over a period of four days in mid-April, the Eastern seaboard of the country was subjected to unprecedented and unexpected rainfall. With nearly 4 000 people displaced and about 400 people dead and a number missing, the South African government has declared a State of Disaster in the province. 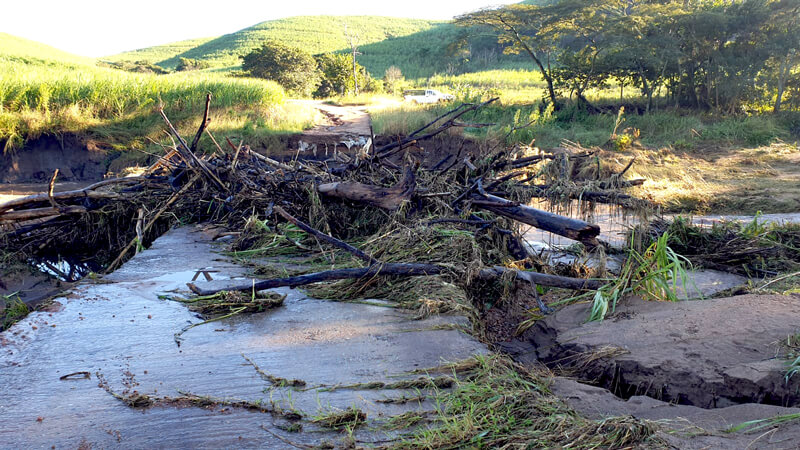 The South African Weather Service accorded the damage to a cut-off low-pressure system, which is associated with widespread instability in the atmosphere and can result in periods of prolonged rainfall, as was experienced in mid-April and mid-May.

In some areas as much as 450mm of rain was measured over four days in the initial downpours, with a further 100mm to 250mm falling just a month later in one night.

While at least one farmer reported up to 30ha of established orchards lost to the floods, others say ripening nuts are starting to germinate on the trees, with root rot a real concern.

Southern KwaZulu-Natal macadamia farmer Luke Dunston said the full impact of the higher-than-average rainfall ever recorded in the province for this time of the year might only become fully apparent as the season progresses.

“I think we are going to see increased problems with phytophthora because there is a lot of water lying about. I also think farmers with more clay-like soils might find drainage a big problem in their orchards.”

Dunston said the impact of the heavy rains had come just as his macadamia trees were recovering from the extensive blight that had damaged orchards in southern KwaZulu-Natal late last year. In that instance, between 100mm and 200mm of rain was measured in the area over a seven-day period, followed a week later by one of the hottest days on record at 40°C. 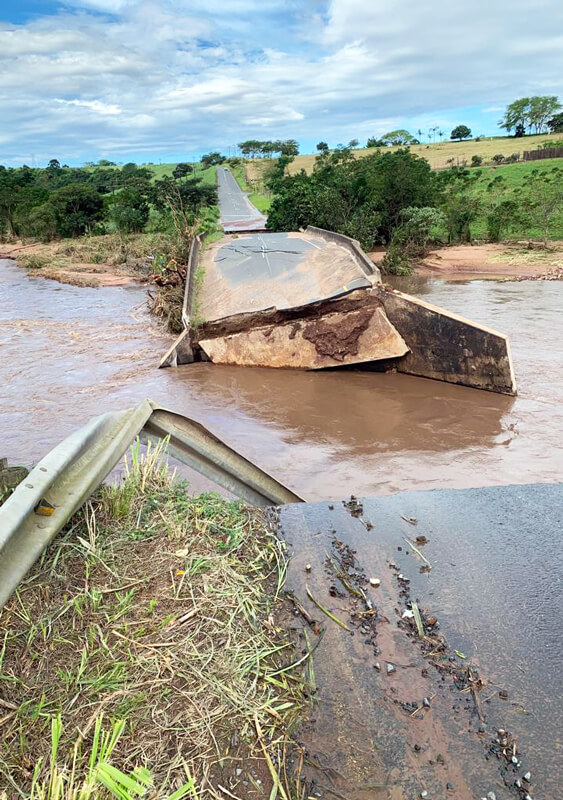 “Our annual average rainfall here should be between 700mm and 900mm a year. Last year we recorded 1 100mm. We are now having to manage the unknown, nothing is standard anymore, this is the new normal,” he said.

William Davidson, however, who farms on the outskirts of Richards Bay in Zululand, said his orchards had escaped relatively unscathed, for now. “We were fortunate in that we measured just 294mm over the four days of the rainfall in mid-April. We had another 100mm early in May and another 100mm in mid-May. That meant no infrastructure damage, but our harvesting was delayed a little because drying time increased due to the relative humidity. The humidity levels are a lot higher than usual during the day with dew point being reached soon after sundown,” he said.

As a result germination had increased in nuts both on the trees and on the ground. “The germination is considered a defect and increases the charge for processing, which means we get a lower price for our crop. My defect for a batch of N2 – even after the second selection – went up to 5.09%. This will increase processing costs by a few rands a kilogram.” 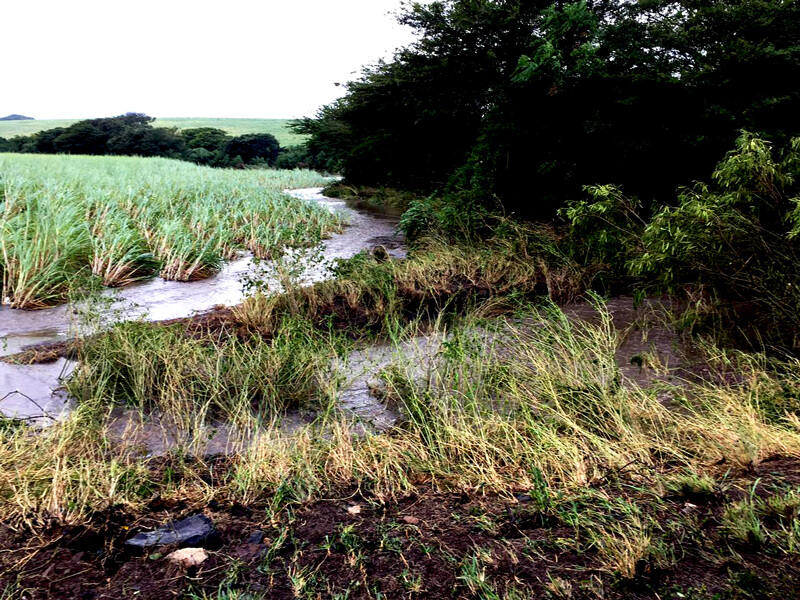 Davidson said his main concern was the possibility of root disease later in the season due to low soil aeration. “But that will take time to show. The crop, however, is way up on other years, and insect damage levels are far lower, so it’s not all bad news for us.”

Ant Goble, who farms sugarcane and macadamia on the banks of one of the tributaries of the Umhlali River, said considering the force of the water and the heavy rains, the damage was manageable in his macadamia orchards. “Some of our smaller macadamia trees washed away but none of the more mature trees Our harvesting was fortunately not affected either, so we have been able to get our crop to the factory.”

Dave Wise, who farms downstream from Goble, was not as lucky.

“I had 30ha of two to four-year-old trees washed away. We had 450mm of rain over that April weekend. All we can do is farm what was left, repair what we can and carry on no matter what. What else can we do?” he said.

On the more recent rainfall, Wise said any further damage incurred was repairable. “We had 120mm in one day in this last rain, but it wasn’t as bad as the damage we suffered in April,” he said.

According to industry figures the average macadamia orchard development cost today is anything between R50 000 and R60 000 per ha, with an added R30 000 for the installation of irrigation – this puts the significance of the losses into perspective, particularly in the light that some might have to restore their orchards from the ground up.

Nick Lincoln, whose property is also nearby, said the damage to infrastructure such as roads, bridges and farm buildings, was exponential. “What I have decided, though, is that we are on our own. I don’t think we are going to get any help, subsidy, or compensation. We are going to have to help each other to recover. So, we have fixed the roads, fixed the bridges, and restored any infrastructure that we could to make sure we can carry on farming.” 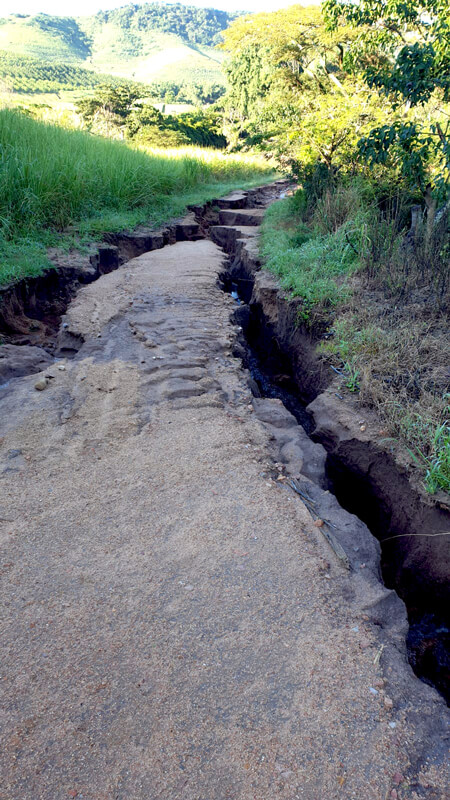 As many in the province farm both sugarcane and macadamias. the flooding posed a double whammy for farmers.

In a survey carried out across 300 growers impacted by the floods, SA Canegrowers established that 2516.65ha of cane was damaged and would require total replanting.

Goble, whose second farm in the Berg suffered a massive hailstorm on the same day as the April floods, was, however, pragmatic.

“As farmers we must be grateful for the positives and try our best to work through the risks and the negatives,” he said.