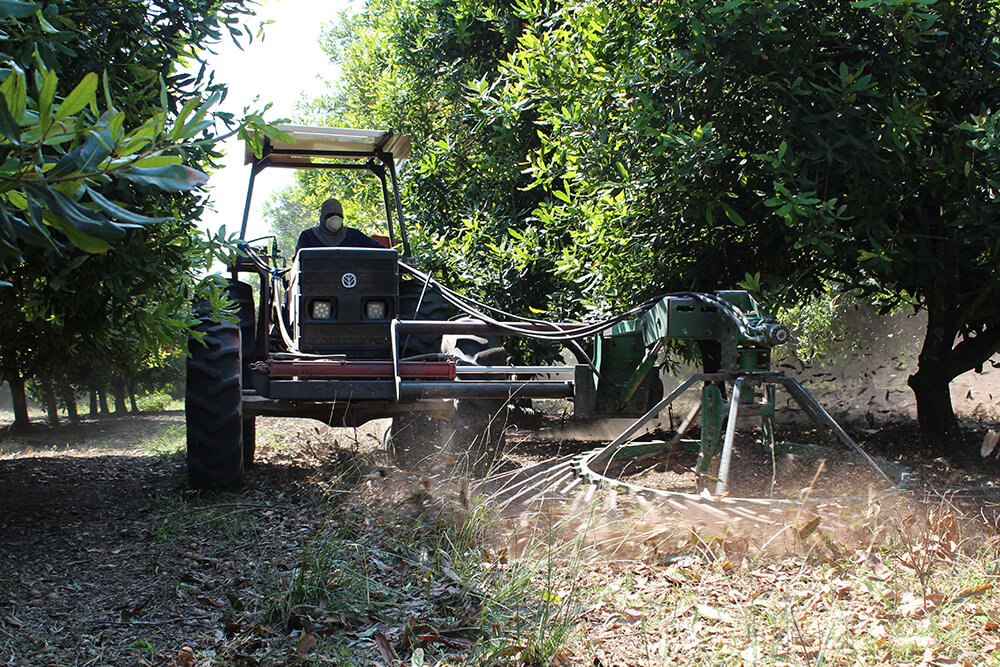 Mechanical harvesting has increased the use of Ethephon in macadamia orchards. But not all varieties react the same way to a dosage.

While Ethephon is a chemical widely used by macadamia growers to assist with a co-ordinated nut harvest, experts warn the unintended consequences of indiscriminate applications can have dire consequences on the longevity of the trees.

Dr Chris Searle, owner of MacAvo Consulting in Australia and Mark Penter, a researcher at the Agricultural Research Council in South Africa, agree Ethephon is a useful tool in providing a uniform nut drop, particularly in orchards where mechanisation has been employed, but they say planning, knowing the condition of the orchard and upcoming weather conditions, will make the difference between success and failure.

As Ethylen is produced naturally by plants, particularly when they are stressed or during growth such as germination, ripening of fruits, abscission of leaves and senescence of flowers, Penter says using caution when applying the derived application, Ethephon, in already stressed trees, is common sense.

“Naturally, under stress conditions, ethylene is already there, so by adding additional applications of ethylene, the farmer could be creating further problems. In some plants it will induce flowering, while in others it will inhibit flowering. The product can also be used as a defoliant. So, there’s a wide range of applications for ethylene, which can either be seriously detrimental or beneficial depending on how and when it is applied to the trees,” he says. 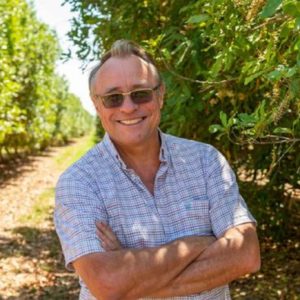 Searle adds while Ethephon is registered for some macadamia varieties, there are recommendations for different levels to be used for different varieties.

“It is a product that must be used with care, and only at certain times of the year. If too much is in the tank with a rate too high for some varieties, the result could be severe defoliation.”

And according to Penter complaints received from farmers on the efficacy of the product were also more frequent during cooler weather conditions. “We advise growers to keep an eye on the mid-range weather forecast, and if there’s potential for a cold front developing, not to go ahead with application, as it will not be effective. Conversely, very hot conditions can result in a greater effect than was expected, with an excessive leaf drop,” he said.

The South African researcher said when seasons transformed from summer warmth to lower temperatures, particularly on clear nights, the cut-off time for using Ethephon was reached. “This is when Ethephon becomes less effective. We have seen that it will work well before a cold front, but when a cold front arrives, the product can stop working almost overnight.

“The cut-off time for Ethephon use is also closely related to when the trees are getting ready to flower. Farmers don’t want to be spraying when the flower buds start to swell. If bud initiation has occurred, which is something you can’t see by the way, and the trees are approaching bud swell, there is generally a couple of weeks’ delay in the actual flowering if Ethephon is used. Where bud swell has occurred, it tends to damage and burn those flowers,” he added.

In determining the correct time to apply Ethephon for nut drop, Penter said as a rule of thumb, to have a maturity level of 72% oil. This generally equates to at least 95% dry kernel floating on water. 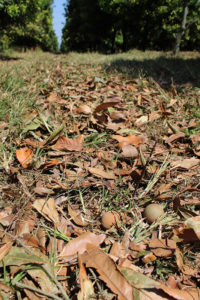 Although traditionally only used on Beaumont varieties to force nut drop, increased mechanical harvesting on farms has resulted in more and more farmers using the product on all their varieties.

Since limited trials have been done on the effects of Ethephon on varieties besides Beaumont, applications should be done with extreme caution, with Searle saying Ethephon should not be used on A14s.

“I’ve seen massive defoliation when growers have used the wrong rates.  On the other end of the scale, on an A16, I’ve seen people use incredibly high rates, and it is completely ineffective. Again, it changes with the season, so this is a tool requiring experienced use and a careful build up before any application,” he said.

Penter added a warning on the use of the product on 816s.

“We’ve had some very large leaf drops at the recommended rate, and the leaves that don’t drop generally turn yellow. The trees do recover, albeit slowly so it’s not a desirable situation. And there are a few other instances in cultivars such as 791s and 788s, where Ethephon will cause an abscission of young leaves and new leaf flushes. Growers must make a note of what condition their trees are in before they apply the chemical. They don’t want to target trees that have a young flush, particularly among these cultivars,” he said. 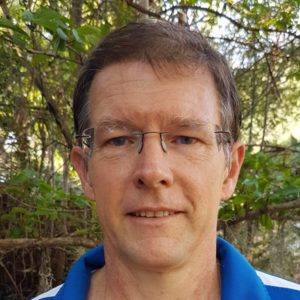 But, Penter added, defoliation in Beaumonts because of Ethephon use had proven beneficial in some instances. “Traditionally, Beaumonts not treated with Ethephon are incredibly dense in the centre. They tend to hang on to their old leaves for a long period. We found in the early years of our work that an Ethephon application would drop those older leaves, opening up the canopy while at the same time allowing more light into the inside of the tree. This probably assists with flowering and light interception. And for some of our trials we noticed a trend towards slightly higher yields in Ethephon-treated trees.”

“We recommend farmers do not apply Ethephon to stressed trees, that’s if they can recognise when the trees are under stress. Phytophthora is a sign of stress, but there are other environmental stresses which are maybe not so easy to determine by sight. For example, drought stress is not always visible. Macadamia trees don’t readily wilt, and they don’t undergo chlorosis in the early parts of drought stress.

“There are some studies in South Africa where we are seeing the potential to measure drought stress using stem xylem potential, which is a measurement the country’s almond growers are using. But it’s not widely used by macadamia growers. That’s something we probably must adopt and train our growers to adopt. But before that, the studies that are in progress now need to give us some guidelines. So, there’s no easy, simple way for a grower to tell whether or not the trees are under stress.”

Another important point in the effective use of Ethephon is realising its inefficacy in dislodging stick tights. These are slightly open brown nuts, where the husk is still on the tree, and the nuts are hanging inside the shell.

As the husk in stick tights is physiologically dead, it will not react to the Ethephon. “The best way to get rid of these nuts is with a tree shaker, to help break the disease cycle,” Penter said.

Searle believes spraying Ethephon before the stick tights formed would be beneficial.

“But a lot of stick tights are probably the result of stress within the tree and because of this a farmer wouldn’t usually apply Ethephon anyway under these circumstances. But if they wanted to go down this road, then they would need to alleviate the stress before applying the chemical,” Searle said.

Both researchers recommend using wetter conditions when applying Ethephon to get more even coverage in the orchard. A buffer to ensure the pH of the water is around seven is also recommended.

They also advise that proper planning should be in place before using Ethephon to avoid any unintended consequences.

Searle added that farmers would need to plan properly to make sure the farm was ready to handle the nuts scheduled to drop two weeks after the application.

“They have to check the weather forecast to make sure rain is not predicted two weeks after the application; adequate storage space must be available, and the people available to sort the nuts. I often see incidences where growers spray the whole orchard and then their shed can’t keep up with the volume of nuts on the ground. The harvester can’t get around to everything, and leaves start to fall, landing on top of the nuts, which means the machines can’t pick them up, making the whole situation worse.”

If farmers are going to use Ethephon, Searle said, there was a list of actions needed beforehand, which included being aware of the result of the applications. “If a farmer is ready to spray an orchard, then it’s advisable to spray one section this week, another next and another the week after that. That means they are better able to cope when the nuts start to fall,” he said.

*Research for this article was sourced from the Australian Macadamia Society with the help of industry development manager Leoni Kojetin.