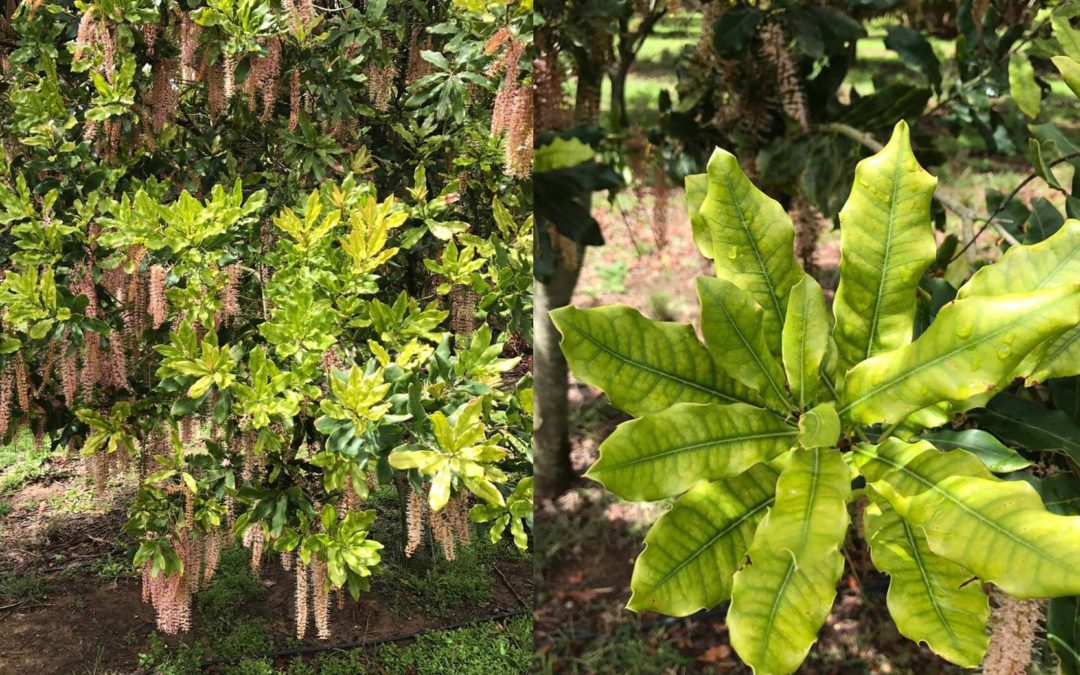 Iron deficiencies in macadamia orchards are characterised by yellow leaves and, eventually, die-back in branches, resulting in lower yields. While rectifying iron levels can be a lengthy and costly exercise, orchard preparation at the start can prevent future problems.

Without iron, chlorophyll cannot be formed in a plant. It is therefore crucial to ensure that this micronutrient is in perfect balance to make respiration, photosynthesis and the mobilising of oxygen and sulphur in the plant system possible.

Nico Claassens, business development manager of plant nutrition at Laeveld Agrochem, explained that the yellowing of the intervein areas of a leaf is a typical symptom of iron shortages. “If this is not corrected, die-back of the leave tips and branches will occur and even total die-back of the branch or tree. The yield and nut quality of affected trees will decline because no energy is available to set a crop or to effectively transform water to oil in the kernel.”

Claassens said the following factors cause iron deficiency in macadamias:

Incorrect soil pH: Iron is most effectively absorbed in the tree at a soil pH level of 5 to 6.5. At a pH above 7.0, iron will bond with minerals such as calcium and magnesium, making it insoluble.

Chemical imbalances: Elements in abundance, such as phosphate, calcium, magnesium, zinc, manganese, sodium and carbonates, all have a negative effect on the availability of iron to the plant roots.

Lack of oxygen in the soil: This is mainly caused by wet and cold soil conditions, which enhance the mobility of minerals like manganese, preventing the uptake of iron because of manganese’s superior mobility in the soil. A lack of oxygen also causes soils to compact, having a negative effect on available soil oxygen around the root area.

Soil compaction: Insufficient soil preparation before planting and lack of organic components in the soil causes fine sandy soils and high clay soils to become compacted easily. But iron deficiency can occur in any soil type so land preparation must be done effectively before planting. The soil must also be continuously maintained to ensure proper root development and health in the coming years. Older orchards in general suffer from compaction, and rectifying the problem is expensive and takes time, so prevention is better than cure.

Low microbial activity: Bacillus Ferrooxidans is a soil-borne bacterium responsible for making elements in the soil, such as iron, available to the plant. In leached and sandy soils and those that have been vigorously fumigated with products like ethylene dibromide (EDB), the microbial activity will be very low or non-existent.

Root diseases: Diseases such as phytophthora will have a negative effect on new root development, which is very important for the uptake of iron, because iron is only absorbed by newly active, growing roots.

Claassens advised that the development of new orchards be carefully considered to prevent future iron deficiency problems in macadamias. “Choose well-drained soils that are above the frost line and which are rich in organic matter. The richer the soil is in minerals and organic matter, the better the trees will perform.

“Unfortunately, macadamia trees don’t have the ability to grow in very substandard soils. It is therefore important to ensure that the minimum standards for root development and health are adhered to.”

He said proper soil classification and preparation would prevent poor performance of the trees due to iron deficiencies or other shortfalls. “Planting trees on ridges ensures good drainage and good aeration, which results in healthy, active roots. The height of the ridge will be determined by the soil depth and physical condition.”

Claassens cautioned against using organic fertilisers high in phosphates, such as chicken litter. “This could result in a build-up of phosphates in the soil to the extent where iron fixation can take place.

“Old tobacco soils were known to be annually fumigated with EDB, which had a detrimental effect on the soil microbes. Trees to be grown in these soils should be treated with beneficial microbes when they are planted. Using good organic mulch, organic acids and other soil microbe nutrients will help establish and maintain a healthy macadamia orchard.”

When iron or any other cation micronutrient is applied to the soil in non-chelated form, it has little effect, because the mineral becomes attached to the soil particles, which then become negatively charged, very quickly. It is also restricted by other soil minerals competing for position in the rhizosphere of the roots.

While low iron levels are common in macadamia orchards, Claassens said although excess iron can produce symptoms of stunted growth and discoloured, bronzing foliage, it is unlikely to happen in tree crops like macadamias because they can withstand high iron levels.

“Over supply can cause a short term toxicity effect due to the sudden increase of iron in the root zone. This can either cause root burn or an imbalance with other essential plant nutrients like zinc, copper, calcium or magnesium. It is crucial to continuously measure iron levels and ensure the tree is receiving the correct amounts to flourish,” he added.