Healthy trees are best equipped to fight off pests 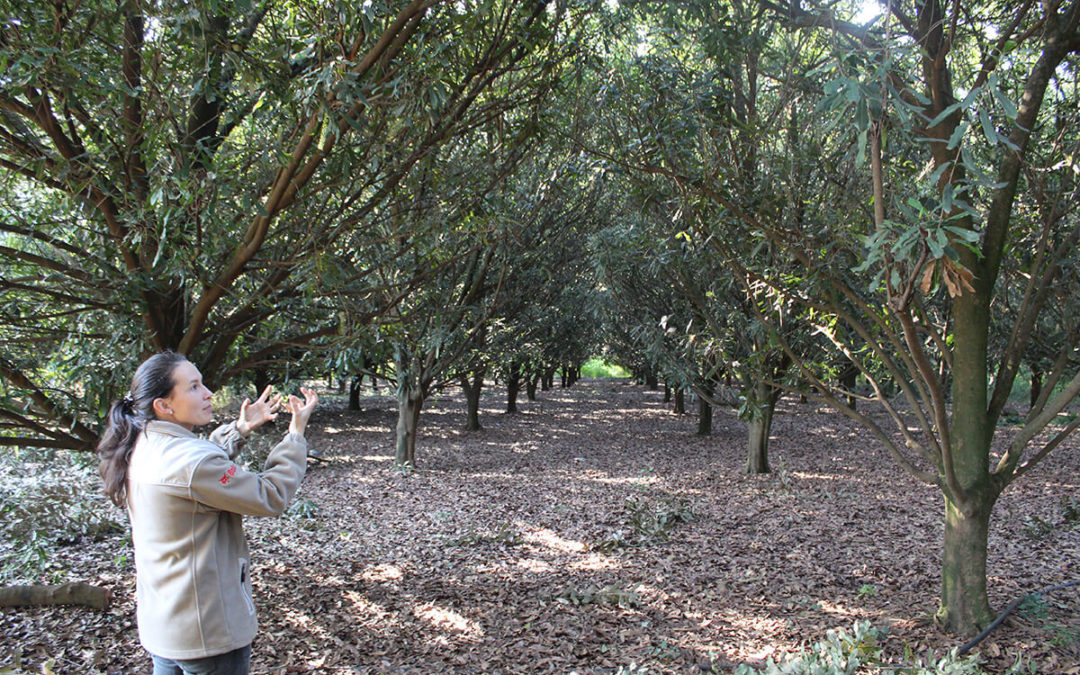 In a series spanning the next three editions, The Macadamia is turning its spotlight on stinkbug loads in orchards, how to rely on natural predators, how useful insect nets are when placed around the trunks of the trees, and the role of cover crops and pruning techniques in the fight against pest infestation.

Incidences of stinkbug infestations in macadamia orchards in South Africa are reportedly mounting despite the increased use of pesticides, which suggests farmers must shift their focus from symptomatic control to addressing the cause of the surge.

Experts are urging macadamia farmers to adopt a more holistic approach to the control of stinkbugs by understanding the life cycle of the insect and the prevailing conditions that are encouraging them to flourish.

And while this approach may seem complex, ultimately, the scientists say, it is more cost effective and environmentally responsible than the blanket applications of pesticides used commonly on farms across the industry.

Macadamia research expert, farmer and industry consultant Elsje Joubert has some strong words for the industry, saying the “commercial businessman” approach to production is one of the biggest challenges as many “chased” hectares and tonnages, rather than healthier and better managed orchards.

“Many farmers believe that by following a set pesticide application programme they will increase their wealth,” she said. “As they apply more and more pesticides the ecology in their orchards effectively dies. There is no life other than weak trees whose natural resistance to pests has been wiped out by the over-use of chemicals. Organo-phosphates (a common class of insecticides, which in large doses can harm both people and animals) are being sprayed using helicopters. Many farmers believe this works without actually going into the orchards to check whether it does or not. A farm is not something you can control and make work if you don’t get into the orchards and find out exactly what is going on. When the tonnage and quality are down, then many of the farmers described here go into a hiring and firing mode, trying to run the farm like a sausage factory where only output matters.”

A further looming issue, she said, was a short term view in an industry where the crop was “coining it”.

“When farmers see their pesticide bill growing against a shrinking yield, only then do they think about engaging in some research.”

Joubert’s strong words are guided by her in-field experience. She has spent a decade in macadamia orchards doing research and trying to find solutions to the challenges facing farmers. She has witnessed first hand the increase in chemical use and the decrease in the life in the orchards, while stinkbug populations and thrips are exponentially on the rise.

“I always ask farmers: ‘when last did you see a praying mantis in your orchard? Or even a ladybug?’ These are excellent predators for pests but you just don’t see them anymore. This is a sign that something is very wrong. Instead of spraying more chemicals, farmers must look at the wider problem and introduce more integrated solutions. Macadamia farming is a new industry and we still have so much to learn. Farmers need to keep open minds and be willing to change their way of thinking if this industry is going to survive the pest onslaught into the future.” 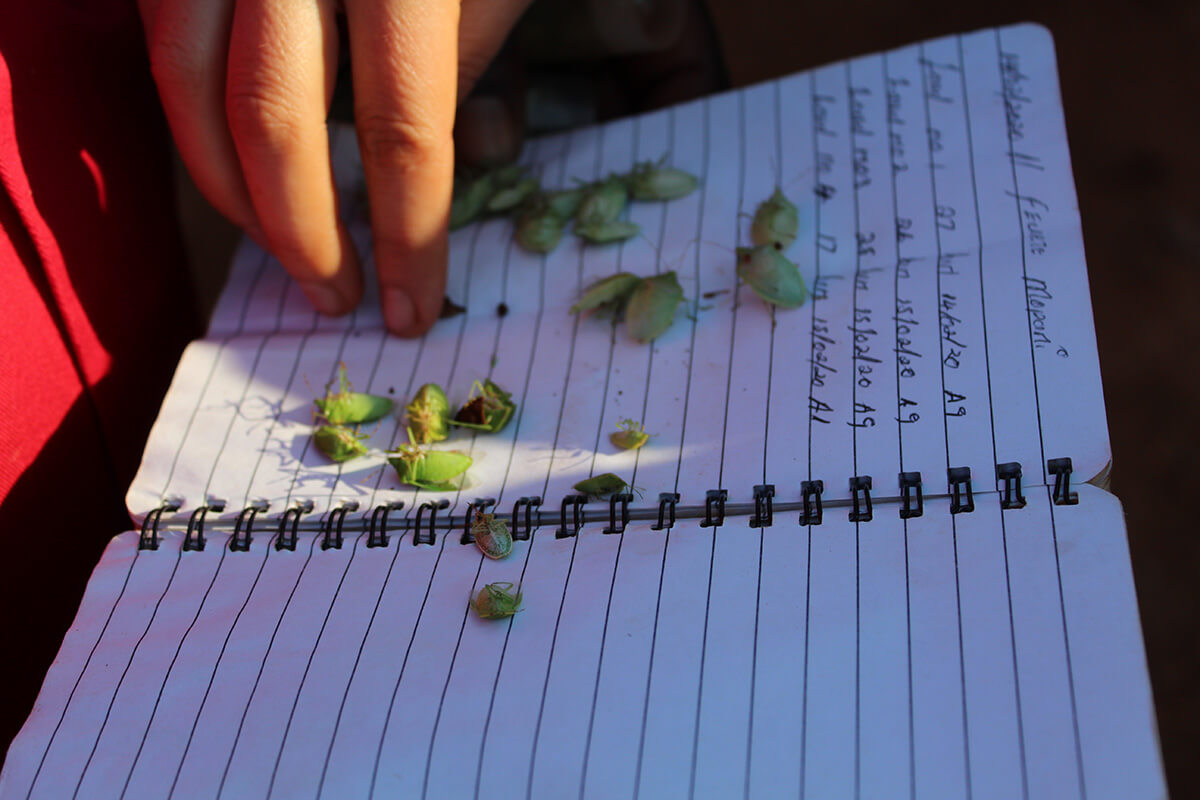 Stinkbug populations appear to be increasing in macadamia orchards.

The life of stinkbugs

It’s about getting back to the basics, Joubert said.

“Farmers should understand and know the biological cycle of a stinkbug; how it behaves and multiplies. Generally, the hotter it is the faster it breeds. This is because the insect emerges faster from its egg parcel in warm weather, which means its life cycle transition is much faster. In colder temperatures, they slow down. They spend the winter in the orchards, but they hide and move slowly. They crawl rather than fly and it takes longer for them to make their lifecycle transition. This is important to know because even though it may not be detected, the bug is in the orchard all year round.

“Stinkbugs can walk and eat, and because most trees in the orchard touch each other, it doesn’t have to fly from one tree to the next. This is important to remember when looking at the spacing of the trees and the density of the canopy.

“Both the females and males inflict damage as they feed. The newly hatched stinkbugs also walk and eat, causing damage as they go. So it is a double whammy when compared, for example, with fruit flies on citrus trees where only the females create damage to the plant.”

The stinkbug’s reproductive cycle is an added challenge, Joubert added, as they consistently lay a parcel of 14 eggs.

“If you understand this biology then you can understand why it is important not to have a single stinkbug in the orchard. The only way to prevent this is to start controlling the numbers from the earliest stage of the orchard development. If there is a massive stinkbug load, they just keep multiplying and it really is a struggle to get ahead of the problem. It is at this point farmers decide on a blanket application of harsh chemicals.”

“One stinkbug can damage maybe 100 nuts. If it’s a bad year, as this season has been, and there are just 200 nuts, then half the crop is damaged. If is a good year, and the nut set is better at say 1 000 nuts, then the stinkbug damage averages at about 10%. This year the crop is down so drastically, yet the stinkbug load in the orchards is probably the same as last year, which means the damage can be expected to go through the roof.” 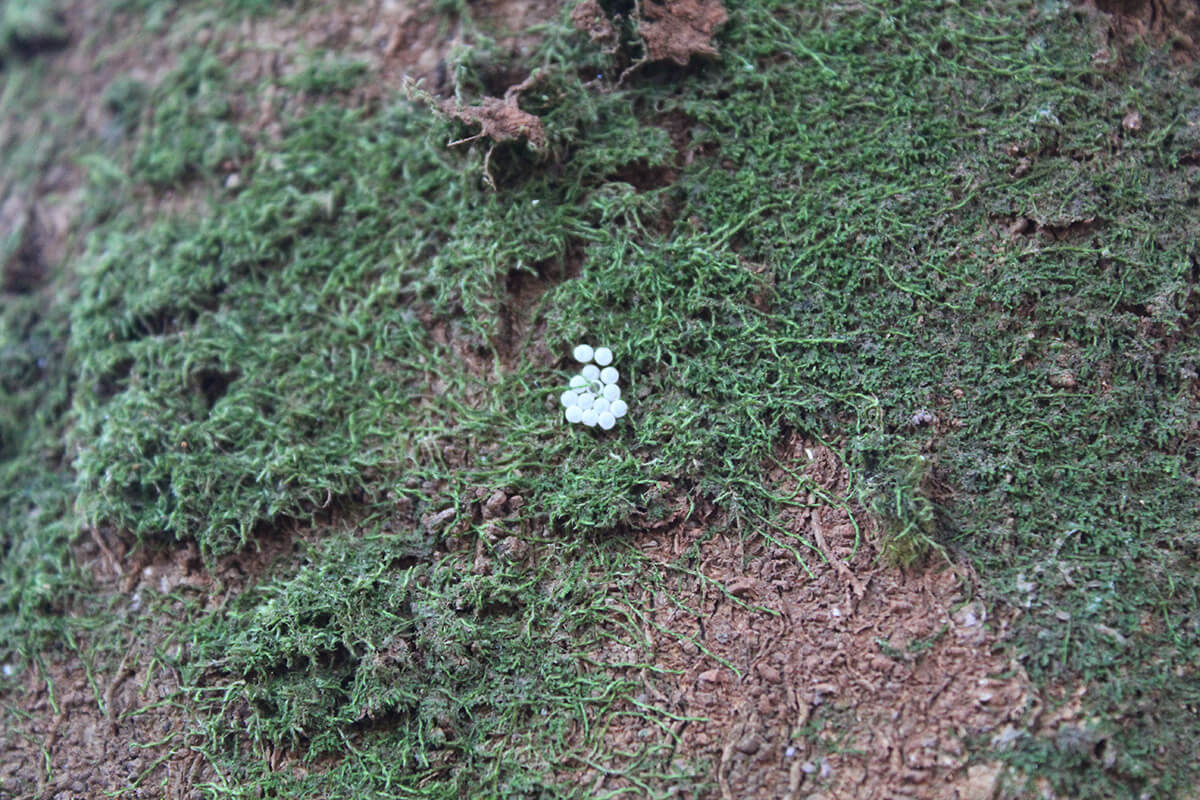 A stinkbug lays 14 eggs in every reproductive cycle.

One of the pillars of Joubert’s “back to basics” strategy is healthy and vibrant trees.

“Farmers must look at the state of their trees and the soils. Healthy soil equals better water uptake equals healthier trees. If trees are less stressed, they are more resistant to pest infestations. If the tree is in its optimum condition and all of the fine roots are getting the nutrition they need, the crop will be good. This the foundation of an effective stinkbug control programme.”

Joubert explained how thrips is better managed in healthy trees.

“Thrips eats the young soft leaves of the new flush. If those leaves’ cells are stronger, then the thrips or stinkbug will take longer to chew and get through the leaf. So the insect is then slowed down and can do less damage in one day. So how can the farmer make the leaves of his trees stronger? By having a good combination of calcium and silica in the leaf cells. Calcium is the building block, if you like, and the silica is the cement keeping the blocks together.

“If the roots are healthy, they will multiply and create new growth points. These new growth points are where calcium is absorbed. If there are no new root growth points, the tree can’t absorb calcium. If the soil is healthy and not compacted, you have an ideal soil climate for trees where new roots can grow and easily absorb calcium. Silica is naturally present in the soil and can be added through compost and fertilisers, so in essence, these blocks with their silica cement are able to build strong cells able to fight off pests naturally. When an insect comes along and it wants to eat the leaves or the husk of the nuts, it struggles to digest the stronger cells.  Conversely, if the plant is weak the leaves and husks are softer, which means an insect can inflict way more damage to the plant.”

“But sooner or later they will get to the point where their trees are weak and the soils poor because all of the beneficial organisms have been killed off, and the stinkbug populations have exploded. It is only then that many of these farmers will come to understand that what they have always done is really not fit for purpose anymore. It is a little like all the chickens coming home to roost at once.”