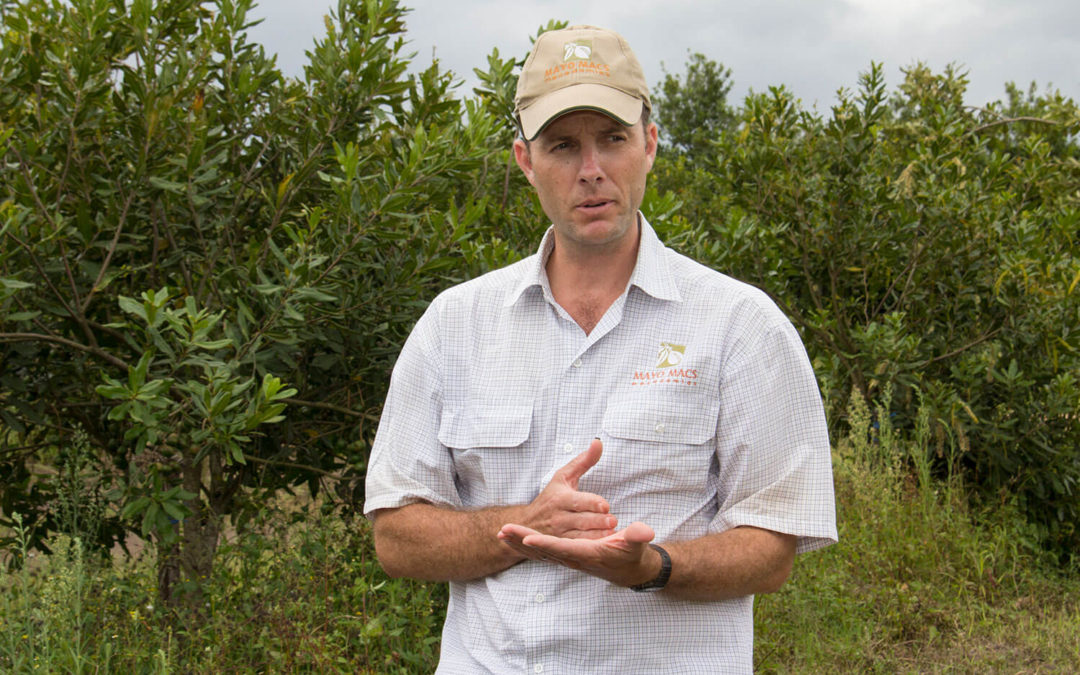 In the lead up to the harvesting season, Mayo Macs Technical Manager Andrew Sheard says through February and March farmers should be focused on orchard floor clean up and harvest equipment maintenance, maturity testing and stink bug control.

Orchard hygiene should include:

Maintenance of harvest equipment means making sure all the dehusking and drying equipment is in working order and replacing any worn or damaged dehusking chains, while a set of spare chains should be on hand in case of break downs.

Sheard said all on-farm drying facilities should be cleaned and checked to ensure they were in good working condition and able to handle projected peak harvest volumes.

“Producers must be confident they have at least 30%-on-farm storage facilities for the total projected harvest and to provide adequate reaping containers, while drying bins must be able to dry the nuts to at least 10% moisture content,” he said.

On the maturity testing of the nuts, Sheard said producers should carry out proper kernel maturity tests before stripping early cultivars, particularly on Beaumonts which did not drop their nuts

The brown colour under the husk is just one indicator of kernel maturity and a proper maturity test should be done using a sample of 50 to 100 randomly picked nuts per block of trees, he said.

“Dehusk the nuts and dry them in an oven set at 50°C or microwave the nuts in a 700 to 800 watt oven for about 16 minutes. Dry in three-minute increments and place a 300ml jug of water in the microwave until the kernel moisture content is more than 1.5%. Then, manually crack the nuts and place the kernels in a bowl of water. If more than 95% of the kernels float, the crop is mature and should be harvested within six weeks.”

Sheard said hybrid cultivars such as Beaumonts, Nel 2, A4 and A16 however, had a lower oil content than Integs and would as a result have a lower percentage floating kernel when mature.

Also, the internal husk colour of the Nel 2 did not turn completely brown like other cultivars at maturity.

Fertilise as a percentage of the annual requirement

Contact herbicides such as Basta/Nirvana/Bound, Gramoxone/Paraquat and Preeglone/Parody for example should be used to control weeds around the base of the young trees while these and other registered herbicides should also be used to burn down weeds under the bearing trees, Sheard said.

In a normal season the requirement for water would start to decrease starting in February, however if drought conditions continued to persist in some areas, Sheard recommended growers monitor soil moisture curves on their Aquacheck, Irricheck or DFM soil moisture probe software and maintain correct levels. This was to make sure that soil moisture levels remained within the “norms”.

Stay ahead of pests with scouting

“Scout weekly and also monitor after an orchard spray because stink bugs can continue to damage nuts right up until harvest. It is not advisable to go longer than six weeks without spraying, however it is critically important that farmers heed the registered insecticide withholding periods,” he said.

Levels of False Codling Moth and the Macadamia Nut Borer were particularly bad this season.

As a result Sheard said farmers should check their orchards regularly for unseasonal nut drop while continously monitoring Yellow Delta traps weekly because while the threat from borers decreases as the shells harden, any damage would increase the incidences of nut drop and kernel immaturity.

“We urge farmers to estimate borer damage in the orchard and at the sorting table as a measure to help with planning for the next growing season. We also advise farmers to continue scouting for stink bug and borer through the season as a precautionary measure to keep ahead of pest infestation in the orchards,” he said.